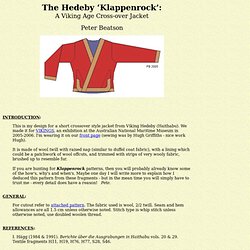 We made it for VIKINGS, an exhibition at the Australian National Maritime Museum in 2005-2006. I'm wearing it on our front page (sewing was by Hugh Griffiths - nice work Hugh).It is made of wool twill with raised nap (similar to duffel coat fabric), with a lining which could be a patchwork of wool offcuts, and trimmed with strips of very wooly fabric, brushed up to resemble fur.If you are hunting for Klappenrock patterns, then you will probably already know some of the how's, why's and when's. Maybe one day I will write more to explain how I deduced this pattern from these fragments - but in the mean time you will simply have to trust me - every detail does have a reason!

For cutout refer to attached pattern. I. 1. 2. 3. 4. 5. 6. 7. 8. 9. Klappenrock: a viking jacket - a magyar jurta. Klappenrock sketches I’ve been wanting to make a short viking coat (sometimes called a Klappenrock) for my husband for some time. 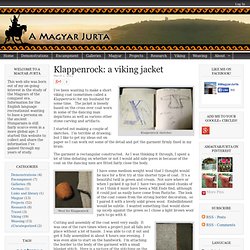 The jacket is loosely based on the cross over coat worn in some of the dancing man depictions as well as various other stone carving and artifacts. I started out making a couple of sketches. I’m terrible at drawing, but I like to get my ideas out on paper so I can work out some of the detail and get the garment firmly fixed in my brain. Viking Embroidery. This document is provided as is without any express or implied warranties. 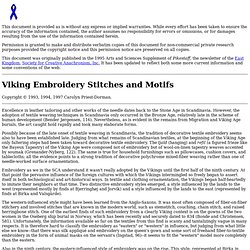 While every effort has been taken to ensure the accuracy of the information contained, the author assumes no responsibility for errors or omissions, or for damages resulting from the use of the information contained herein. Permission is granted to make and distribute verbatim copies of this document for non-commercial private research purposes provided the copyright notice and this permission notice are preserved on all copies. This document was originally published in the 1995 Arts and Sciences Supplement of Pikestaff, the newsletter of the East Kingdom, Society for Creative Anachronism, Inc. It has been updated to reflect both some more current information and some conventions of the web. Copyright © 1993, 1994, 1997 Carolyn Priest-Dorman. Excellence in leather tailoring and other works of the needle dates back to the Stone Age in Scandinavia. Designs and Motifs. A 9th Century Viking Caftan.

As I've mentioned earlier, my daughter has recently decided that she would like to wear Viking Era clothing. In putting together her wardrobe, I decided that she should have a warm, outer layer for winter. Some quick research led me to the caftan. Carolyn Priest-Dorman (Mistress ThoraSharptooth, in the SCA) defines the woman's caftan as, "The outermost layer of garb, it's a long-sleeved long coat which was pinned together at about the solar plexus with a large brooch; it ... was heavily ornamented," A Quick and Dirty Guide to Viking Women's Garb in the 9th and 10th Centuries.

Pattern: Although entire pieces of clothing were not found in the Birka, Sweden excavations, which cover the 9th and 10th Centuries, archaeologists were able to gain a lot of knowledge about several different tunic-style garments such as smocks, tunics, and coats. Motif: Kaftans. The dancing figures from the Sutton Hoo plaques, wearing the warrior jackets and strange helmets Most Saxons and Vikings wore the standard woollen overtunics that we all know and love, however this was not a universal style. 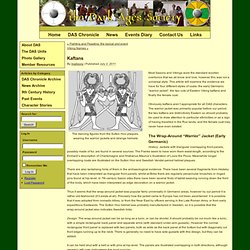 This article will examine the evidence we have for four different styles of coats- the early Germanic “warrior jacket”, the two cuts of Eastern Viking kaftans and finally the female coat. Obviously kaftans aren’t appropriate for all DAS characters. The warrior jacket was primarily popular before our period; the two kaftans are distinctively Eastern so should probably be used to draw attention to particular ethnicities or as a sign of having travelled in the Rus lands; and the female coat may never have even existed.

The Wrap-Around “Warrior” Jacket (Early Germanic) History: Jackets with triangular overlapping front panels, possibly made of fur, are found in several sources. Viking Tunic Construction. This document was originally a pamphlet that accompanied classes I taught in the East Kingdom of the Society for Creative Anachronism, Inc. 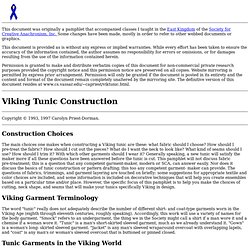 Some changes have been made, mostly in order to refer to other webbed documents or graphics. This document is provided as is without any express or implied warranties. While every effort has been taken to ensure the accuracy of the information contained, the author assumes no responsibility for errors or omissions, or for damages resulting from the use of the information contained herein. Permission is granted to make and distribute verbatim copies of this document for non-commercial private research purposes provided the copyright notice and this permission notice are preserved on all copies. Website mirroring is permitted by express prior arrangement. Copyright © 1993, 1997 Carolyn Priest-Dorman. Construction Choices The main choices one makes when constructing a Viking tunic are these: what fabric should I choose?