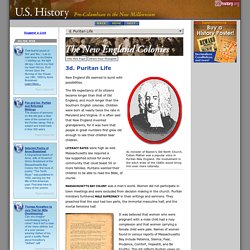 His involvement in the witch trials of the 1680s would bring him even more notoriety. New England life seemed to burst with possibilities. The life expectancy of its citizens became longer than that of Old England, and much longer than the Southern English colonies. Children were born at nearly twice the rate in Maryland and Virginia. It is often said that New England invented grandparents, for it was here that people in great numbers first grew old enough to see their children bear children. Literacy rates were high as well. Massachusetts Bay Colony was a man's world. Puritan law was extremely strict; men and women were severly punished for a variety of crimes. It was believed that women who were pregnant with a male child had a rosy complexion and that women carrying a female child were pale. Church attendance was mandatory. The Puritans believed they were doing God's work.

Puritans Beliefs About Dress Codes. Puritanism arose in England in the 16th century as a response to what some Protestants saw as the “impure” practices of the Anglican Church, tainted, they believed, by Catholic ceremony. 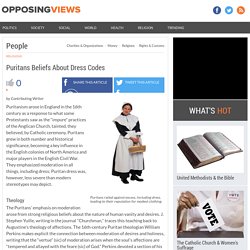 Puritans grew in both number and historical significance, becoming a key influence in the English colonies of North America and major players in the English Civil War. They emphasized moderation in all things, including dress; Puritan dress was, however, less severe than modern stereotypes may depict. Theology The Puritans’ emphasis on moderation arose from strong religious beliefs about the nature of human vanity and desires. J. Ornament The lavish fashions of the 16th century affected a careless elegance, explains Scott R. Color The enduring image of Puritans depicts them clad in sober black, but that stereotype is incorrect.

Purposes Perkins asserts the purpose of clothing is important to consider, and he calls for wearing the right garments for the task at hand. About the Author. Political Dissent, Puritans, and the Use of Linen. By Lisette BC Abbott Let me ask you a question: what do you think of when you’re dressing in the morning? 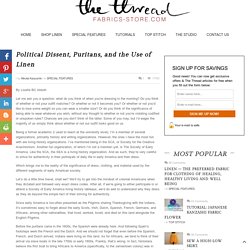 Do you think of whether or not your outfit matches? Or whether or not it becomes you? Or whether or not you’d like to lose some weight so you can wear a smaller size? Or do you think of the significance of being able to wear whatever you wish, without any thought to whether or not you’re violating codified or unspoken rules? Being a former academic (I used to teach at the university level), I’m a member of several organizations, primarily history and writing organizations. Which brings me to the reality of the significance of dress, clothing, and material used by the different segments of early American society. Let’s do a little time travel, shall we? Indian Converts Collection. Puritan Style Houses While Puritans may have lived in wigwams, dugouts, and crude cabins during the first year of settlement, they quickly built more traditional houses on the island (Scott I.55-57). 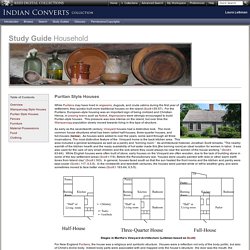 For the Puritans, European-style housing was an important sign of being civilized and Christian. Hence, in praying towns such as Natick, Algonquians were strongly encouraged to build Puritan-style houses. This pressure was less intense on the island, but over time the Wampanoag population slowly moved towards living in this type of structure. As early as the seventeenth century, Vineyard houses had a distinctive look. Stages in Martha's Vineyard Architecture (Leibman based on Scott) For New England Puritans, the house was a religious and symbolic structure. Items Related to Puritan Style Houses in the Archive Wampanoag Style Houses < Previous | Next > Fences. Where American Puritans Lived - Christian History & Biography - ChristianityTodayLibrary.com. Where American Puritans LivedJanuary 1, 1994 To Raise a Family: Early Puritans lived in one-room mud homes with thatched roofs. 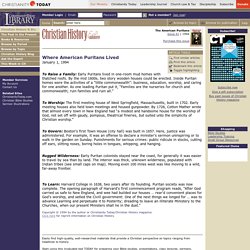 By the mid 1600s, two story wooden houses could be erected. Inside Puritan homes were the activities of a “little commonwealth”: business, education, worship, and caring for one another. As one leading Puritan put it, “Families are the nurseries for church and commonwealth; ruin families and ruin all.” To Worship: The first meeting house of West Springfield, Massachusetts, built in 1702. To Govern: Boston’s first Town House (city hall) was built in 1657. Rugged Wilderness: Early Puritan colonists stayed near the coast, for generally it was easier to travel by sea than by land. To Learn: Harvard College in 1638, two years after its founding. Copyright © 1994 by the author or Christianity Today/Christian History magazine.Click here for reprint information on Christian History.