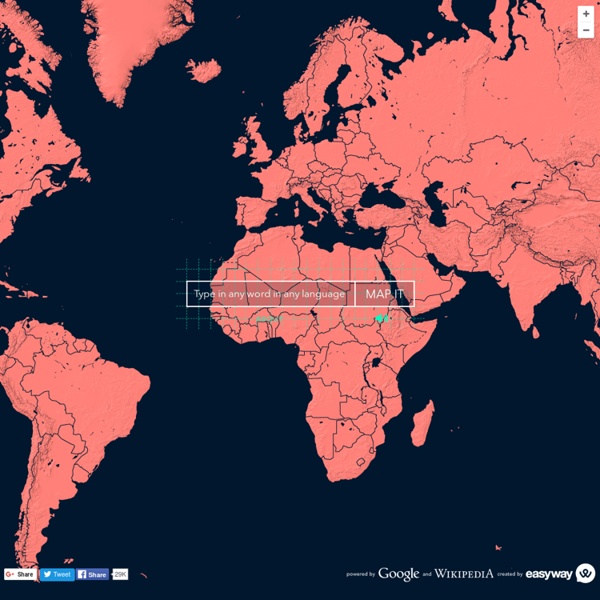 FASTEN SEAT BELTS 2 - Travel by Continent - Europe Fasten Seat Belts, a light hearted guide to avoid misunderstandings while travelling. An innovative way to learn languages and pick up cultural tips. Travel by Continent / Europe In the Netherlands, it is the custom on someone's birthday to... Gifts, Miscellaneous, Do's & Don'ts, Netherlands What Languages Are the Hardest to Learn? 1036 26ShareNew There's a reason why most American students start with French or Spanish as a second language. These romance languages are somewhat similar to English and require (relatively) less time to learn than most.

Scientists say the ways humans describe nature transcends culture and geography Kampala, Uganda At a bustling Kampala market, Desire Karakire listens to a group of young men express their frustrations over the state of their country. Like most of their peers, they’re underemployed and extremely poor—and they feel the only way the situation will change is through violent revolution. “Leadership involves blood,” says Richard Ssenyoga, 23. With Uganda’s Feb. 18 national election approaching, these sentiments of violence are exactly what youth activists like Karakire are trying to mitigate. “If violence broke out, we all have so much to lose.

Lexical Distance Among the Languages of Europe « Etymologikon™ Posted by Teresa Elms on 4 March 2008 This chart shows the lexical distance — that is, the degree of overall vocabulary divergence — among the major languages of Europe. The size of each circle represents the number of speakers for that language. Circles of the same color belong to the same language group. All the groups except for Finno-Ugric (in yellow) are in turn members of the Indo-European language family. English is a member of the Germanic group (blue) within the Indo-European family. What's the best way to teach languages? Alex Rawlings was a language teacher's dream. He fell in love with languages when he was eight and learnt Greek, then German, then Dutch. Now, an undergraduate at Oxford, he is the UK's most multi-lingual student, speaking 11 languages. So what's his secret? "I remember seeing people on the beach in Greece when I was a kid and not being able to talk to them," says Alex.

8 Practical Ways to Learn All the Foreign Language Vocabulary Needed for Conversational Fluency Did you know that 1,000 words can get you a long, long way in a foreign language? It might not seem that easy when you’re looking at the raw numbers. The Oxford English Dictionary includes more than 170,000 English word entries. The “Hanyu Da Cidian” dictionary includes 370,000 Mandarin Chinese words, and the “Explanatory Dictionary of the Living Great Russian Language” includes 200,000 Russian words. Most languages have similar numbers of words circling around.

How to identify any language at a glance Sign Up for Our free email newsletters Thanks to globalization, it's very likely that at some point you've found yourself faced with a line of text written in a language you couldn't quite identify. Maybe in the international section of a grocery store, or on Facebook, for example. "What the heck is this language?" Explicit cookie consent JOHNSON is a fan of the Freakonomics books and columns. But this week’s podcast makes me wonder if the team of Stephen Dubner and Steven Levitt aren’t overstretching themselves a bit. “Is learning a foreign language really worth it?”, asks the headline. A reader writes:

How to quickly learn declensions and conjugations I’m definitely a weirdo. I enjoy learning grammar! Declensions, conjugations, possessive pronouns. I love them all! Reverse Dictionary <div id="needs_javascript"><center><b>Note: The new Reverse Dictionary requires JavaScript.</b><br /><img src="/img/a.gif?q=omg_a_user_without_js"> If you have disabled JavaScript in your browser, please <a href=" it for this site</a> or use the <a href="/?w=entersearchhere&loc=revfp_legacy">old version of the reverse dictionary</a> here.</p><p></center><div> How do I use OneLook's thesaurus / reverse dictionary feature?

Love in Translation I moved to Geneva to be with my husband, Olivier, who had moved there because his job required him to. My restaurant French was just passable. Drugstore French was a stretch. IKEA French was pretty much out of the question, meaning that, since Olivier, a native speaker, worked twice as many hours a week as Swiss stores were open, we went for months without things like lamps. We had established our life together in London, where we met on more or less neutral ground: his continent, my language. It worked.