8 Types Of Infographics & Which One To Use When 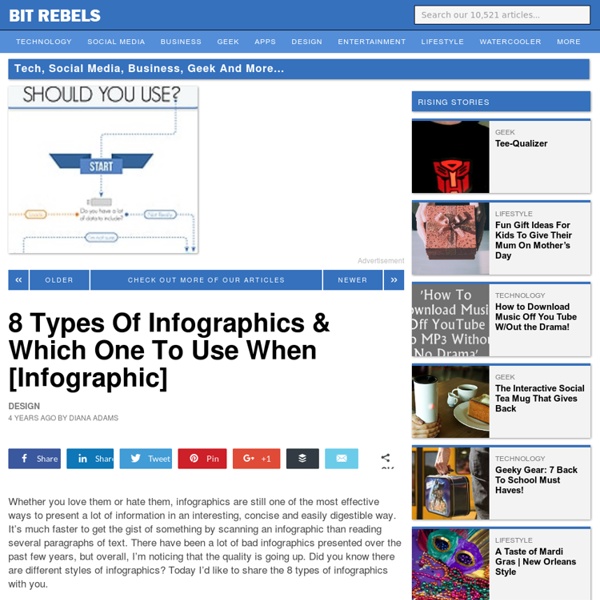 Whether you love them or hate them, infographics are still one of the most effective ways to present a lot of information in an interesting, concise and easily digestible way. It’s much faster to get the gist of something by scanning an infographic than reading several paragraphs of text. There have been a lot of bad infographics presented over the past few years, but overall, I’m noticing that the quality is going up. There are probably more than 8 types of infographics in the world, but for the purpose of this article, let’s just say there are 8 types. FeaturePoints – One of the best apps that will pay you for using it! This well put together presentation was the result of a collaboration between Neo Mammalian Studios and Econsultancy. If you are an infographic designer, you can get more detailed information about this. The only question left is, which of these 8 types of infographics is your favorite? The 8 Types Of Infographics Below(Click Each One To Enlarge)

How to Be an Educated Consumer of Infographics: David Byrne on the Art-Science of Visual Storytelling As an appreciator of the art of visual storytelling by way of good information graphics — an art especially endangered in this golden age of bad infographics served as linkbait — I was thrilled and honored to be on the advisory “Brain Trust” for a project by Pulitzer-Prize-winning journalist, New Yorker writer, and Scientific American neuroscience blog editor Gareth Cook, who has set out to highlight the very best infographics produced each year, online and off. (Disclaimer for the naturally cynical: No money changed hands.) The Best American Infographics 2013 (public library) is now out, featuring the finest examples from the past year — spanning everything from happiness to sports to space to gender politics, and including a contribution by friend-of-Brain Pickings Wendy MacNaughton — with an introduction by none other than David Byrne. Accompanying each image is an artist statement that explores the data, the choice of visual representation, and why it works.

Viz - The quickest way to create simple charts Available on the App Store from Minisimpli Viz is the first iOS App that lets you create simple graph charts instantly You won't have to use obsolete spreadsheet software anymore Share your Viz on your social networks or just save them as an image, ready to use The 90 best infographics | Infographic Every picture tells a story, as they say, but sometimes it takes a clever combination of words and pictures to tell a story quickly, concisely and in an entertaining fashion. The best infographics may look like they were simple to create in Photoshop, but designing an effective piece of data visualization is usually anything but. There are several great tools to create infographics, but these examples of infographics from around the web will show you how you can take it a step further and add a bit of style and personality to your data. Some are older than others, but they can still provide some inspiration for those of you looking to create an infographic from scratch. If Star Wars: The Last Jedi has put you in the mood to immediately watch the original movie, hold your horses just one second. 02. 03. Are you reading this slumped at your desk? 04. Do you know your aperture from your apex? 05. 40 little things you can do to break your creative block 06. 07. 09. 15. 18 rules for using text

Lekh Diagram 8 Steps to Create an Infographic 1. Pick a Topic / Collect Data There are many data sources available, such as Google public data, which is a great starting point for data collection. Advertising-Agriculture-Antiques-Architecture-Arts & Crafts-Automotive-Aviation-Books-Chemicals-Collectibles- Communications & Media-Computers-Consulting-Design-Disabilities-Education-Electronics-Employment-Entertainment- Fashion-Financing-Food-Gambling-Games-Government-Health-Hobbies-Home & Garden-Hospitality-Information-Jewelry- Jewelry-Law-Music-Parenting-Retail-Real Estate-Religion RESEARCH AND DEVELOPMENT Retail Management-Science-Security-Software-Sports-Telecommunication-Transportation-Travel-Video-Weather. 2. Find References for Your Material Over 80% of visual is related to color, which conveys information and provides the user with other operational benefits such as a unique identity. 3. RESEARCH AND DEVELOPMENT: 80% Google, Bing, Yahoo - Select an Artist or Designer 42% Google, Bing, Yahoo

Infographics Archive | Infographic Website Offering Infographics and Data Visualization Infographics for Educators We live in a world of quick consumption, bite-size morsels of information, and visualizations of just about everything. All of this has become boiled down into the uber-popular infographic. They pop up from time to time on Edudemic and I often have a tough time determining if I should actually run versus another. I’ve been saving up all of my favorite infographics for a post just like this one. I picked each infographic based on the topic, breadth of information, and overall worth. The phrase ‘sum is greater than its parts’ comes to mind as each of these 10 infographics is useful in its own right… but altogether they’re downright overwhelmingly helpful. The Public Thinks Laptops Shouldn’t Be Allowed in Class Until High School Technology has become an integral part of life in most parts of America, but some people are still concerned about how we introduce it to young people. The Internet: A Decade Later The growth of the internet in the last 10 years is staggering. Our Future Demands STEM

The Anatomy Of An Infographic: 5 Steps To Create A Powerful Visual Information is very powerful but for the most bit it is bland and unimaginative. Infographics channel information in a visually pleasing, instantly understandable manner, making it not only powerful, but extremely beautiful. Once used predominantly to make maps more approachable, scientific charts less daunting and as key learning tools for children, inforgraphics have now permeated all aspects of the modern world. I designed a couple of infographics back in college, the need arising especially around the time Soccer World Cup fever spiked. It was a fun process representing the different groups, predicting winners in each group at each stage and creating a mock pairing of teams that would clash all the way leading upto the finals. Infographics can appear daunting to some with the sheer amount of data they present, but designed in the right manner and step by step, they can actually be one of the most fun things you will ever create. Anatomy Of An Infographic 1. 2. 3. 4. 5.