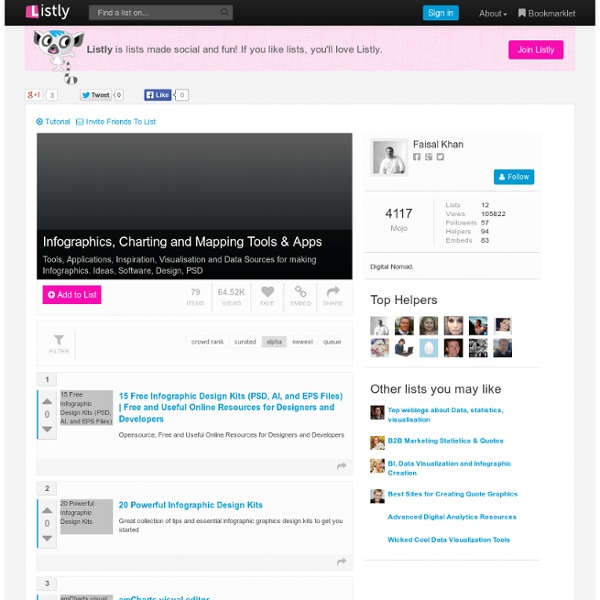 vizualize.me: Visualize your resume in one click. David Byrne’s Hand-Drawn Pencil Diagrams of the Human Condition by Maria Popova “Science’s job is to map our ignorance.” David Byrne may have authored both one of last year’s best albums and best music books, but he is also one of the sharpest thinkers of our time and a kind of visual philosopher. Möbius Structure of Relationships Writing in the introductory essay simply titled “Why? Maybe it was a sort of self-therapy that worked by allowing the hand to ‘say’ what the voice could not.Irrational logic — I’ve heard it called that. Social Information Flow Human Content Hidden Roots More than half a century after Vannevar Bush’s timeless meditation on the value of connections in the knowledge economy, Byrne echoes Stanford’s Robert Sapolsky and contributes a beautiful addition to history’s finest definitions of science: If you can draw a relationship, it can exist. The Legacy of Good Habits Morally Repugnant Gustatory Rainbow Imaginary Social Relationships Christian Subcultures Yes Means No Psychological History Thanks, Wendy Donating = Loving Share on Tumblr

Clean Up Your Mess - A Guide to Visual Design for Everyone Haiku Deck SpicyNodes ONLINE CHARTS | create and design your own charts and diagrams online The Best Data Visualization Projects of 2014 | FlowingData It's always tough to pick my favorite visualization projects. I mean, it's a challenge to pick and rank your favorite anything really. So much depends on what you feel like at the time, and there's a lot of good work out there. These are my favorites for the year, roughly in order of favorite on down and based on use of data, design, and being useful. One unintentional theme: All of my picks are interactive or animated or both. The Upshot Last year, Nate Silver took his ball to play elsewhere, so the New York Times had a data-centric hole to fill, and they came out better for it with the Upshot. If I didn't cluster the Upshot visualization projects into this one section, the individual works would dominate the list. Where We Came From and Where We Went No doubt feeding off the popularity of the dialect quiz map from the end of 2013, the state-by-state migration charts were also fun and playful. The Most Detailed Maps You'll See From the Midterm Elections Visualizing Algorithms Selfiecity