Before the CIA, There Was the Pond. It was a night in early November during the infancy of the Cold War when the anti-communist dissidents were hustled through a garden and across a gully to a vehicle on a dark, deserted road in Budapest. 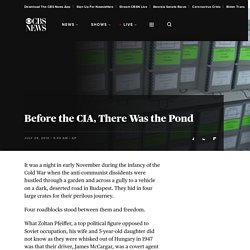 They hid in four large crates for their perilous journey. Four roadblocks stood between them and freedom. Could This Be Clear Evidence of The Nazi's Secret Space Program? After the close of World War II, many Nazis were tried at war crime tribunals for crimes against humanity and violations of human rights. 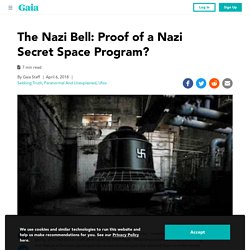 One defendant was Jakob Sporrenberg, a former Nazi SS Obergruppenfuhrer, one of the highest commissioned Nazi SS ranks. A Polish war crimes court tried Sporrenberg for the murder of 60 German engineers, scientists, and technicians. Difference Between Covert and Clandestine - DifferenceBetween.com. Key Difference – Covert vs Clandestine Covert and clandestine are two types of operations that are very confusing to most people although there is a significant difference between a covert operation and a clandestine operation. 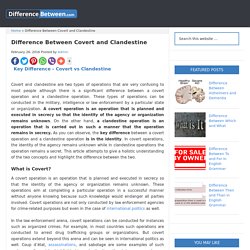 These types of operations can be conducted in the military, intelligence or law enforcement by a particular state or organization. Mary Medcap Fahrney (1910 - 1974) The Modern Day Revival of the Knights Templar - A New Order with an Old Mission. The United States may be a relatively young country, having been founded in 1776, but it has some ties with the Middle Ages. 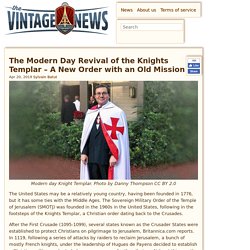 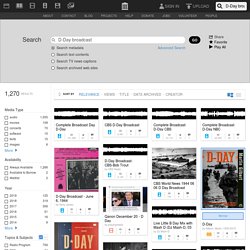 Operation Underworld. Operation Underworld was the United States government's code name for the cooperation of Italian and Jewish organized crime figures from 1942 to 1945 to counter Axis spies and saboteurs along the U.S. northeastern seaboard ports, avoid wartime labor union strikes, and limit theft by black-marketeers of vital war supplies and equipment.

Suspicion about Mafia sabotage in the fire and sinking of the Normandie (renamed the Lafayette for war service), led to Operation Underworld In the first three months after the Attack on Pearl Harbor on December 7, 1941, the U.S. lost 120 merchant ships to German U-boats and surface raiders in the Battle of the Atlantic and in February 1942 the ocean liner SS Normandie – a captured French ship that was being refitted as a troop ship in New York harbor – was allegedly sabotaged and sunk by arson in the Port of New York. 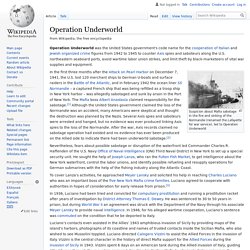 Nevertheless, fears about possible sabotage or disruption of the waterfront led Commander Charles R. Haffenden of the U.S. The Pond: Running Agents for State, War, and the CIA. The Hazards of Private Spy Operations Mark Stout. 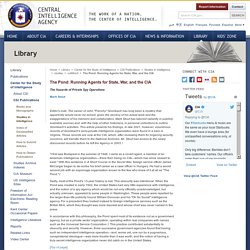 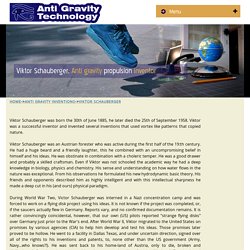 Viktor was a successful inventor and invented several inventions that used vortex like patterns that copied nature. Viktor Schauberger was an Austrian forester who was active during the first half of the 19:th century. He had a huge beard and a friendly laughter, this he combined with an uncompromising belief in himself and his ideas. He was obstinate in combination with a choleric temper. Double-O Who? Meet history's unsung spies - Telegraph. EILEEN NEARNE: The ‘little shop girl’ whose bravery almost went unnoticed Perhaps the most unsung spy of all time was Eileen Nearne. 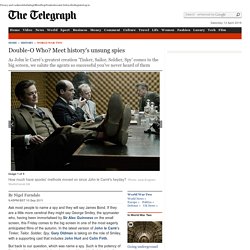 Last year she died alone in her flat in Torquay at the age of 89. Having no surviving family and no one to pay for her funeral, she was about to be cremated unmourned when council workers searching her modest home found medals and other papers relating to her former identity as a British spy. It emerged that during the Second World War, at the tender age of 23, she had operated in France as “Mademoiselle du Tort” for the Special Operations Executive. Nearne, who spoke fluent French, had been successfully sending back reports to Britain until she was caught using her radio set and arrested by the Gestapo. Real James Bond 'snuck into Russia wearing school uniform' - Telegraph. The spy was aged 19 and serving in the Royal Navy after the First World War when he volunteered for the mission. 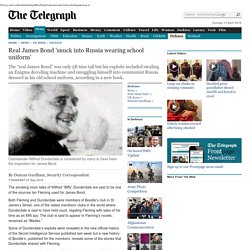 Die Glocke : The Nazi Bell that could travel in time - Infinity Explorers. Field of Vision - A Night at the Garden. Chinatown Film Analysis by Willem Van Lancker. William Pelley and the Silver Legion - HeadStuff. UFO SECRETS OF THE THIRD REICH - THE ALDEBARAN MYSTERY HD. World Events during the 1940s. When Virtue Becomes Vice. After being shot at close range by saloonkeeper John Schrank, a serious fan of term limits, Theodore Roosevelt continued with his scheduled campaign speech, the bullet still lodged in his chest. "It takes more than that to bring down a Bull Moose," he said, speaking for an hour before consenting to medical treatment. Self-confidence, resilience, and fearlessness produce bold leaders who perform well on the job, whether as presidents, CEOs, or war heroes.

But the very same virtues are also just a few degrees from antisocial behaviors with decidedly negative consequences. Lack awareness of your own fears and limitations and it's easy to become reckless, impulsive, and callous, ignoring other people's fears and limitations as well. "Some traits may be like a double-edged sword," says psychologist Scott Lilienfeld, developer of the Psychopathic Personality Inventory and an Emory University professor. Article continues after advertisement. Enrico Fermi, Physics. Enrico Fermi | Physics 1901-1954 When the Geiger counters reached their crescendo on a December day in 1942 under the west stands of Stagg Field, a major step had been taken in the understanding of atomic energy.

By setting in motion a controlled self-sustaining nuclear chain reaction, Enrico Fermi and his colleagues began a process whose consequences continue to affect the course of modern history. Awarded the Nobel prize in 1938 for his work in Rome on neutron physics and atomic transmutations, Fermi seized the occasion as an opportunity to flee Mussolini and Fascism, bringing his wife Laura, who was Jewish, and their children out of Italy.

Fermi was to become one of many European immigrants who played critical roles in developing the atomic bomb. In October 1939, fearing that German physicists were making rapid progress in their efforts to develop an atomic bomb, Fermi, Leo Szilard, and Eugene Wigner alerted President Franklin D. Fermi's singular devotion to his work was not uncommon. Enrico Fermi, Physics.