Oracle Girl. The Occult Reptilian Saga - La Saga Oculta de Los Reptilianos. Untitled. By Michelle Walling, CHLCEditor, Howtoexitthematrix.com Many people on the planet are having a more difficult time surviving and staying balanced and centered than others. 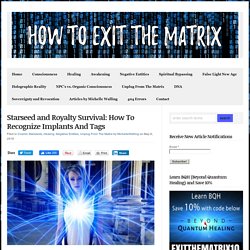 There are several individual reasons for this, and there are some patterns that are apparent as to why some people are targeted by over others for implants or tags. It is important to have the information on this in order to have the power to recognize and get rid of mind control implants and tags that may exist within yourself as well as in others around you. What is an implant? An implant is a mind control device “planted” in the physical or etheric body of a person that allows for triggering emotions, thoughts, words, and actions.

There are more complicated levels of implants that are sometimes put into those who are awakening from the programming in an effort to keep them asleep. Transcending the Matrix Control System. Sovereignki. Reptilian Sex War on Planet Earth. Addressing the Roots of Strife & Abuse Between Women & Men By Marguerite (Dove) Rigoglioso, Ph.D. 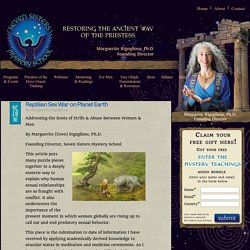 Founding Director, Seven Sisters Mystery School This article puts many puzzle pieces together in a deeply esoteric way to explain why human sexual relationships are so fraught with conflict. It also underscores the importance of the present moment in which women globally are rising up to call out and end predatory sexual behavior.

This piece is the culmination to date of information I have received by applying academically derived knowledge to oracular states in meditation and medicine ceremonies. The material being discussed here is quite provocative and could be quite triggering. And as you read this, please put golden light around you. The Beginning: Reptilian Victory over the Dragons Key to this story are the reptilians, so bear with me as I give some background. We have actually seen these beings in many of our mythological stories. How did the reptilians themselves come to be? Dove. The Aftermath of the Alien Love Bite, Soul Types and Predators.

By Eve Lorgen August 29, 2016 from EveLorgen Website Spanish version Many of my clients and correspondences are from people who experienced some form of anomalous trauma, especially "hyperdimensional interference" issues and especially Dark Side of Cupid "love bite" relationships. 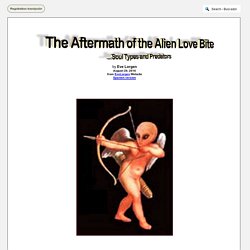 Many are disillusioned from the reality that these kinds of things even exist, where interference on levels "unseen" can predate upon our life force in a way that can either cause the person to "wake up", or fall into unimaginable grief, confusion, embittered disillusionment or worse. In fact, I often refer to a "love bite" experience as a kind of spiritual initiation, where you are thrown in a surreal, emotionally intense love connection, where a characteristic drama unfolds, causing such obsessive love, ecstatic highs, crashing lows and a deep psychic soul connection, that you believe you have met your soul mate or twin flame. 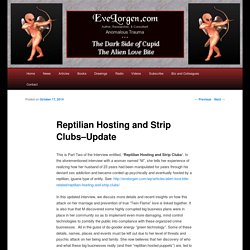 In the aforementioned interview with a woman named “M”, she tells her experience of realizing how her husband of 23 years had been manipulated for years through his deviant sex addiction and became corded up psychically and eventually hosted by a reptilian, iguana type of entity. See: In this updated interview, we discuss more details and recent insights on how this attack on her marriage and prevention of true “Twin Flame” love is linked together. It is also true that M discovered some highly corrupted big business plans were in place in her community so as to implement even more damaging, mind control technologies to zombify the public into compliance with these organized crime businesses. All in the guise of do-gooder energy “green technology”. To summarize the topics we discussed together are: 1. I have realized so much since our last interaction. 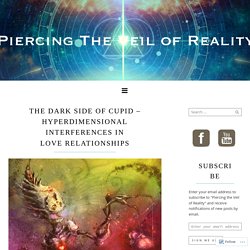 The initial infatuation, emotional highs, projections, great sex and all the hormones creating a rush of bliss and excitement. That is usually the romantic phase. Then reality kicks in and the shadow appears triggering childhood wounds and other issues that usually come up in any relationship. However, there is more to the story in a Dark Side of Cupid/Love Bite relationship. Here is the basic Dark Side of Cupid questionnaire that Lorgen asks her clients: Do these main characteristics seem familiar to you? Obviously there are many variations and degrees of the symptoms listed and not all have to apply, but if the majority fits then it may indeed be a Dark Side of Cupid encounter. There are various vulnerability factors, as Lorgen calls them, which make people more likely to become a victim of the Dark Cupid, although it still can happen to anyone as she pointed out as well.