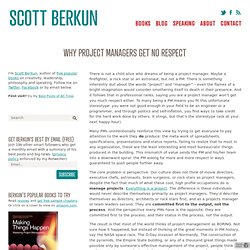 Maybe a firefighter, a rock star or an astronaut, but not a PM. There is something inherently dull about the words “project” and “manager” – even the flames of a bright imagination would consider smothering itself to death in their presence. And it follows that in professional ranks, saying you are a project manager won’t get you much respect either. To many being a PM means you fit this unfortunate stereotype: you were not good enough in your field to be an engineer or a programmer, and through politics and self-inflation, you find ways to take credit for the hard work done by others. It stings, but that’s the stereotype (ask at your next happy hour). The core problem is perspective.

The result is that most of the world thinks of project management as BORING. People with job titles like “Program Manager”, “Product Manager”, “Information Architect” or “Quality Assurance manager” have similar problems. Management Isn’t an Easy Job. I’m always surprised when I meet people who moved to management roles and they pretty much expect it will be reasonably easy position. 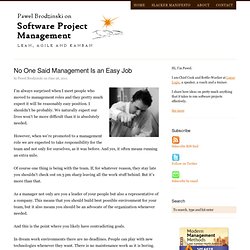 I shouldn’t be probably. We naturally expect our lives won’t be more difficult than it is absolutely needed. However, when we’re promoted to a management role we are expected to take responsibility for the team and not only for ourselves, as it was before. And yes, it often means running an extra mile. Of course one thing is being with the team. As a manager not only are you a leader of your people but also a representative of a company. And this is the point where you likely have contradicting goals. In dream work environments there are no deadlines. Well, I may be exaggerating a bit but hey, I haven’t made it up – this is what I hear talking with people. Unfortunately there’s another perspective as well. I can give you rather an obvious example: consider you are free to give your people as many raises as you wish and they can be as big as you want. 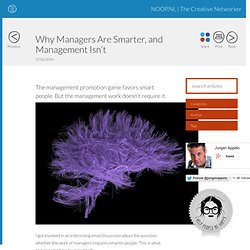 But the management work doesn’t require it. I got involved in an interesting email discussion about the question whether the work of managers requires smarter people. This is what someone told me (summarized): Managers have a “higher role” than other workers, because their work involves “more complexity”, which suggests the need for a higher “MPA (mental processing ability)” for managers.

Let me explain why this is complete nonsense. The Law of Requisite Variety Scientists seem to agree that the human brain is one of the most complex systems in the universe. Où positionner le manager dans un contexte agile ? What do middle managers do? April 16th, 2012 Last week, someone tweeted that the C-suite “gets agile,” but middle managers “resist” it. 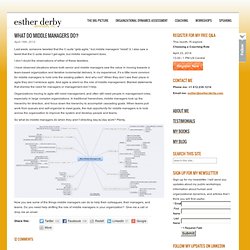 I also saw a tweet that the C-suite doesn’t get agile, but middle management does. How does a non-technical manager add value to a team of self-motivated software developers? Senthil Kumaran asks: I am seeing a lot of programmers turning away from management and administration roles. 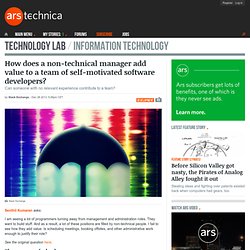 They want to build stuff. And as a result, a lot of these positions are filled by non-technical people. I fail to see how they add value. Is scheduling meetings, booking offsites, and other administrative work enough to justify their role? See the original question here. The greasers of wheels. We’re off on an adventure! « Thinking for a Change. The Dream Team Nightmare It took a while to arrive because the book was out of stock at Amazon, but it’s finally here, just in time for the holiday break: Portia Tung‘s “Dream Team Nightmare“! 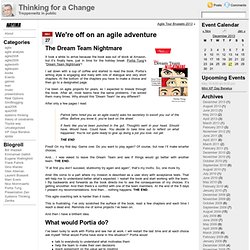 I sat down with a cup of coffee and started to read the book. Portia’s writing style is engaging and lively with lots of dialogue and very short chapters.