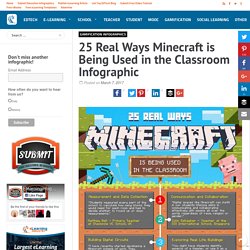 It was little more than a hobby project for creator and designer Markus Persson. Fast forward to 2016 and Minecraft has completely changed the way we perceive videogames. Paper Rockets for Under Five Dollars. What is Mantle of the Expert? » Mantle of the Expert. By Viv Aitken (a version of this article originally appeared in the NZ Education Review, July 3 2009) Mantle of the expert … an active, urgent, purposeful view of learning, in which knowledge is to be operated on, not merely taken in (Dorothy Heathcote) Mantle of the Expert has been described as ‘a dramatic inquiry-learning based approach to teaching and learning’ [mantleoftheexpert.com]. 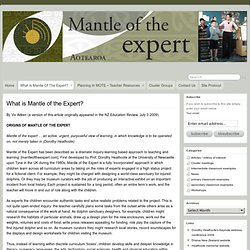 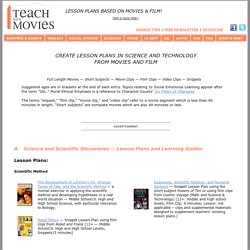 Topics relating to Social Emotional Learning appear after the term "SEL. " Moral-Ethical Emphasis is a reference to Character Counts' Six Pillars of Character. The terms "snippet," "film clip," "movie clip," and "video clip" refer to a movie segment which is less than 40 minutes in length. "Short subjects" are complete movies which are also 40 minutes or less. A. Lesson Plans: » Why is milk white and not green like grass? Office for Science & Society. Questions about milk are always interesting because, after all, it is our first food. 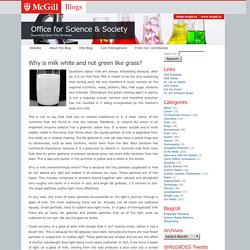 Milk is meant to be the only sustaining food during early life and therefore it must contain all the required nutrients: water, proteins, fats, milk sugar, vitamins and minerals. Chlorophyll, the green coloring agent in plants, is not a required human nutrient and therefore evolution has not resulted in it being incorporated by the mother’s body into milk. This is not to say that milk has no colored substances in it, it does. Some of the nutrients that are found in milk are colored.

Periodic Table Battleship. I have posted a lot about Chemistry lately. 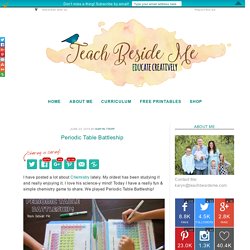 My oldest has been studying it and really enjoying it. Teaching Science with TOYS / Science Literature Integration. Lesson List Balancing the Day Away in Grade 2Blast OffBuoyANT BehaviorCan A Mouse Lift An Elephant? 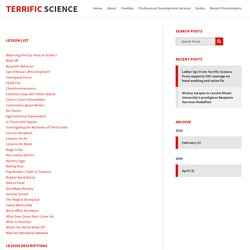 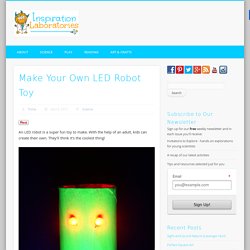 With the help of an adult, kids can create their own. Science Experiments You Can Do At Home or School.

Amazing Ads That Promote Science. Science World has mastered the art of creative billboards that promote science by teaming up with Rethink Canada for their “We Can Explain” and “Now You Know” Campaigns. 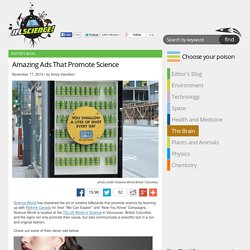 Science World is located at the TELUS World of Science in Vancouver, British Columbia, and the signs not only promote their cause, but also communicate a scientific fact in a fun and original fashion. Check out some of their clever ads below. Naked Scientists Podcast Player. The Best 100 Science Experiments. In 2013, The MacDiarmid Institute in conjunction with (what was then) The New Zealand Teachers Council, launched a competition to find the The Best 100 Science Experiments for Kiwi classrooms. 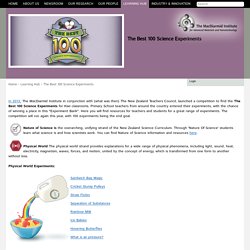 Primary School teachers from around the country entered their experiments, with the chance of winning a place in this "Experiment Bank". Here you will find resources for teachers and students for a great range of experiments. The competition will run again this year, with 100 experiments being the end goal. Nature of Science is the overarching, unifying strand of the New Zealand Science Curriculum. 10 crazy science stunts you can do at home part 2. 10 Amazing Science Experiments you can do with Eggs. Who Came Up With Chewing Gum? Fun Cool Exciting Science Experiments for Children and Kids. The Rhythm of Life : Combining Science and Music ,Educational Workshops for Schools. 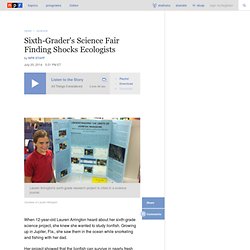 "It was just a small, sixth-grade project, and I really didn't have all the tools necessary," she says. Beau Lotto: Optical illusions show how we see. 25 Halloween Science and Sensory Activities for Kids - Fun-A-Day! 672 Flares6481806----×672 Flares FUN Halloween science and sensory activities for the kiddos! Welcome back to Share It Saturday. Last week, as always, there were so many wonderful posts linked up! I especially loved the Halloween science and sensory activities that were shared. So those are the ideas I’m featuring today, along with a few others I recently found. 1. 11. 16. 21. Be sure to check out my fellow hostesses and see what they’re featuring this week!

How to Heat Your Room for 15 Cents a Day. Wanting to cut costs on the energy bill, especially now that temperatures are dropping for the season? Economics may be one reason to seek more sustainable energy sources, but this inventive way to heat the house is also purely fascinating. Journalist, YouTuber, and boat owner Dylan Winter created his DIY heater using tea lights and placed inside a bread tin and covered with two ceramic flowerpots.

This creative system uses the scientific principles of convection heat transfer and, according to Winter, can heat his home for around 8 hours a day. The tea lights are first put into a bread loaf tin and covered with a small upside-down flower pot. The hole in the top of the upside-down pot is covered with the metal casing leftover from one of the tea lights. This system works because the candles produce gases full of heated particles that are captured and channeled through the pots.

Pot-in-pot refrigerator. A pot-in-pot refrigerator, clay pot cooler[1] or zeer (Arabic: زير‎) is an evaporative cooling refrigeration device which does not use electricity. It uses a porous outer earthenware pot, lined with wet sand, contains an inner pot (which can be glazed to prevent penetration by the liquid) within which the food is placed - the evaporation of the outer liquid draws heat from the inner pot. The device can be used to cool any substance.

This simple technology requires only a flow of relatively dry air and a source of water. History[edit] There is some evidence that evaporative cooling was used as early as the Old Kingdom of Egypt, around 2500 B.C. Five Fun Activities for a Children’s Science Club. A few years ago, I attended a conference in Ottawa hosted by the Science and Technology Awareness Network (STAN), an organization that promotes science and technology education in Canada ( One of the things that struck me during that conference was the discussion that science and technology education in Canada is lagging behind other countries and that fewer young Canadians than ever before are opting for post-secondary education in the sciences. As such, one of the primary mandates of the conference was figuring out how to encourage more young Canadians to pursue higher degrees and select careers in the sciences. By the time most students reach high school, they’ve already made up their minds about science and it’s too late.

As with many things, a passion and interest in science begins at an early age. 12 Preschool Science Experiments. These preschool science experiments are perfect for the smallest scientists. Engage little ones curious nature of “why” and use these hands on activities to explain.