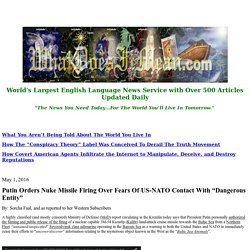 " What You Aren’t Being Told About The World You Live In How The “Conspiracy Theory” Label Was Conceived To Derail The Truth Movement How Covert American Agents Infiltrate the Internet to Manipulate, Deceive, and Destroy Reputations May 1, 2016 Putin Orders Nuke Missile Firing Over Fears Of US-NATO Contact With “Dangerous Entity” By: Sorcha Faal, and as reported to her Western Subscribers So concerned, in fact, has the MoD become in regards to the US-NATO efforts towards this mysterious object, this report continues, it has authorized numerous combat maneuvers against these Western warships that have included the disabling of the USS Donald Cook in the Baltic Sea and confrontations by Federation fighter aircraft against American spy planes flying over this region.

When Oakville, Washington was showered with mysterious blobs in 1994, a modern mystery was born. The incident has been discussed and debated ever since. How accurate is the story and the photo that often accompanies it? Today we take a look. Sponsored links The story is true, but the photo is completely unrelated.

Sounds in the Sky

Illinois Town Covered in Mysterious Sticky Residue Falling From Sky. Vic Bishop, Staff WriterWaking Times For the last few weeks in the small, friendly town of Elk Grove Village, Illinois, a bizarre sticky substance has been falling from the sky leaving a nasty, persistent coating on everything on the ground below including cars, window and homes. 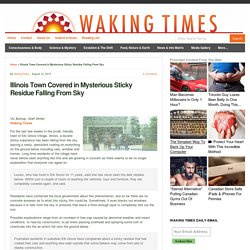 Long time residents of the village have never before seen anything like this and are growing in concern as there seems to be no single explanation that everyone can agree on. Lucarz, who has lived in Elk Grove for 11 years, said she has never seen the dark residue before. Within just a couple of hours of washing her vehicles, toys and furniture, they are completely covered again, she said. Residents have contacted the local government about this phenomenon, and so far there are no concrete answers as to what this sticky film could be. The mystery of the Marfa Lights. Drive down an obscure portion of U.S. 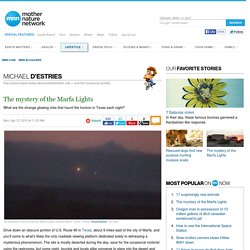 Route 90 in Texas, about 9 miles east of the city of Marfa, and you'll come to what's likely the only roadside viewing platform dedicated solely to witnessing a mysterious phenomenon. Esoteric, Spiritual and Metaphysical Database. Ancient Antigravity Machine Discovered. (Before It's News) This extraordinary ancient megalithic site which I discovered in 2009 while looking for another site, is all but unknown and even among those who do know it there is scarcely a one who has grasped its true meaning and significance. 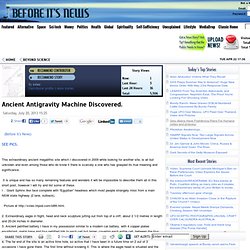 It is unique and has so many remaining features and wonders it will be impossible to describe them all in this short post, however I will try and list some of these. I . Giant Sphinx like face complete with “Egyptian” headress which most people strangely miss from a main NSW state highway (2 lane, outback). 2. 3. 4. 5. The cups themselves measure approximately 3-4 inches wide and 3-4 inches protusion from the petrified surface and 2- 2 1/2 inches between each. ’X-ray?’ 6. MY UFO EXPERIENCE: Witness Recounts Flash, Loud Boom, and Falling, Burning Debris. Reader Submitted Report[Unedited]4-17-08 I am emailing you in response from a request from our mutual friend Mike Fortson who lives in AZ. 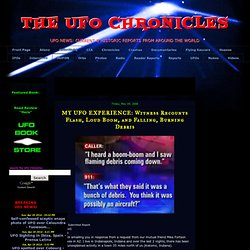 I live in Indianapolis, Indiana and over the last 2 nights, there has been some unexplained activity in a town 35 miles north of us (Kokomo, Indiana). Last night, Wednesday March 16, 2008 at around 10:15 pm a large blast was heard by the citizens of that area from the north side of Kokomo south to the town of Tipton, Indiana - a distance of 20-25 miles. The emergency management response was extensive involving authorities from several organizations. Your Source for UFO and Paranormal Related Information. ‘Giant serpent’ invades island near Phuket. PHUKET: Mysterious giant tracks appeared overnight on Friday (December 14) on Koh Mai Pai (Bamboo Island, just north of Phi Phi), emerging from the forest, going through the local school and then into the sea, leaving students, parents and teachers worrying that they were made by some enormous serpent. 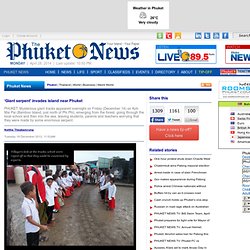 Nattha Thepbamrung Tuesday 18 December 2012, 11:52AM Villagers look at the tracks, which were roped off so that they could be examined by experts. The tracks consisted of a long line of pairs of circles, each circle 20 centimetres in diameter. Local experts estimated that the serpent that made the tracks must be at least 15 metres long. Earths Unsolved X-files (Part 5) 21. 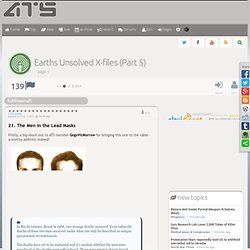 The Men in the Lead Masks Firstly, a big shout-out to ATS member GogoVicMorrow for bringing this one to the table - a worthy addition indeed! In Rio de Janeiro, Brazil in 1966, two strange deaths occurred. Even today the deaths of these two men occurred under what can only be described as unique paranormal circumstances.