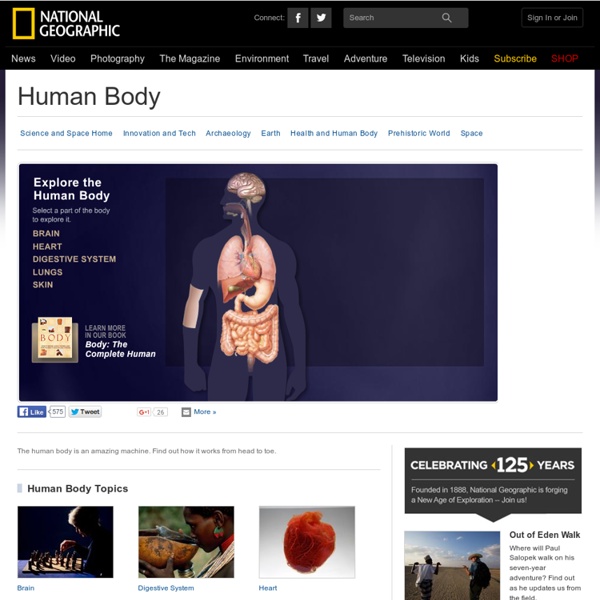 Beyond the Brain What goes on within the human skull is more complex and fantastic than anyone imagined. And scientists are finding ways to delve even deeper into what we know of the mind. Mending Broken Hearts Cheeseburgers, smoking, stress—risk factors for heart disease, a malady reaching global epidemic proportions. Now, discoveries about genetic triggers may help us spot trouble before it starts. Related:  emilkovac

Map of the Human Heart Map of the Human Heart Day and night, the muscles of your heart contract and relax to pump blood throughout your body. In the Step Thru below, see the complicated path the blood takes as it moves in and out of the heart. Step Thru Animation Oxygen-poor blood (shown in blue) flows from the body into the right atrium. Blood flows through the right atrium into the right ventricle. Anatomy Do right and left seem backward? aortasuperior vena cavaright atriuminferior vena cavapulmonary valvetricuspid valveright ventriclemitral valveleft ventriclepulmonary arteryaortic valveleft atrium Heart Facts Put your hand on your heart. Hold out your hand and make a fist. Give a tennis ball a good, hard squeeze. The aorta, the largest artery in the body, is almost the diameter of a garden hose. Feel your pulse by placing two fingers at pulse points on your neck or wrists. Your body has about 5.6 liters (6 quarts) of blood. Your heart beats about 100,000 times in one day and about 35 million times in a year.

Memory - Mapping Memory 3D Interactive National Geographic Magazine Curse of the Buzz Saw Killer Subscribe to National Geographic Waves are generating power—just one of many signs of hope for our… How these threatened animals could bounce back Globally, humans are better off today than on the first Earth Day Your favorite foods are at risk from a rapidly warming planet Nights are getting brighter—just one of many symptoms of an ailing… Many overlooked animals are languishing Deepest Dive Under Antarctica Reveals a Shockingly Vibrant World It’s like the apocalypse, but smaller Out of the Shadows, the Wildcats You've Never Seen The Next Moon Landing Is Near—Thanks to These Pioneering Engineers Why we explored two starkly different futures for the Earth… National Geographic questions what lies ahead for the planet—will it be saved or lost? See how your city’s climate might change by 2070 Change is coming for every corner of the planet. In swirling oceans 275 million years ago lived one of the top predators of its time, the Helicoprion.

Frog Digestive System Diagram The Digestive system of frog The digestive system of frog consists of two parts Alimentary canal Digestive glands. Frog Digestive System:alimentary Canal The alimentary canal is short because frogs are carnivores and hence the length of intestine is reduced. alimentary canal consists of t the following parts MouthBuccal cavityPharynxOesophagusStomachSmall intestineLarge intestineCloaca The frog's digestive system begins with the mouth. It leads to buccal cavity. Tongue is blobbed and free behind and fixed infront. The pharynx contains openings of Eustachian tubes, vocal sacs in male’s gullet and glottis. The gullet opens into a narrow oesophagus that leads into a wide a wide, tubular, slightly curved stomach. The stomach is followed by a long, narrow tube, the small intestine. A bilobed urinary bladder also opens into the cloaca. Digestive Glands The major digestive glands are: Gastric glands,Liver,Pancreas Intestinalglands. Gasric glands are tiny glands found in the wall of stomach.

The Human Body: 14 StudyJams! Interactive Science Activities The Human Body The human body is all about cooperation. Learn how cells, tissues, and organs all work together to make your body run. The Skeletal System The skeletal system has a mission: to provide strength and movement. The Muscular System Every time you go out to play, thank your muscular system. The Circulatory System The circulatory system is like the body's superhighway, helping all the things our bodies need get where they need to go! The Respiratory System Take a deep breath. The Nervous System The nervous system is like the body's control center: It has a hand in everything that is going on in your body. The Immune System Ahh-choo! The Digestive System Is your stomach growling? The Senses: Seeing It is pretty amazing. The Senses: Smelling Smelling is a wonderful sense. The Senses: Touching Soft, hard, smooth, spiky are all things you can sense by touch. The Senses: Hearing Ever wonder how all that sound gets through your ears? The Senses: Tasting Imagine your favorite food. Heredity

Circulatory System III: The Heart What purpose does the heart serve? And how do different types of hearts function? In this lesson, you'll learn about two, three and four-chambered hearts. Explore our library of over 10,000 lessons You now have full access to our lessons and courses, watch the lesson now or keep exploring. You've watched a video! You took a quiz! You just finished your first lesson. You're making great progress. You've learned so much, but only scratched the surface. Getting a perfect score on a quiz is how you gain course progress. You're getting the hang of this! Look how far you've come! Keep clicking that 'next lesson' button whenever you finish a lesson and its quiz. You're 25% of the way through this course! Two days in a row, nice!

History of East Timor East Timor is a country in Southeast Asia, officially known as Democratic Republic of Timor-Leste. The country comprises the eastern half of the island of Timor and the nearby islands of Atauro and Jaco. The first inhabitants are thought to be descendant of Australoid and Melanesian peoples. The Portuguese began to trade with Timor by the early 16th century and colonized it throughout the mid-century. East Timor declared itself independent from Portugal on 28 November 1975, but was invaded by neighboring Indonesia nine days later. Pre-colonial history[edit] The island of Timor was populated as part of the human migrations that have shaped Australasia more generally. Around 3000 BC, a second migration brought Melanesians. The later Timorese were not seafarers, rather they were land focussed peoples who did not make contact with other islands and peoples by sea. Early European explorers report that the island had a number of small chiefdoms or princedoms in the early 16th century.

Electric Heart | Amazing Heart Facts Originally appeared on the NOVA Web site Cut to the Heart. Sure, you know how to steal hearts, win hearts, and break hearts. But how much do you really know about your heart and how it works? Read on to your heart's content! Put your hand on your heart. Map of the Human Heart | Amazing Heart Facts The Artificial Human | Pioneering Surgeon | Operation: Heart Transplant Resources | Transcript | Site Map | Electric Heart Home Editor's Picks | Previous Sites | Join Us/E-mail | TV/Web Schedule About NOVA | Teachers | Site Map | Shop | Jobs | Search | To print PBS Online | NOVA Online | WGBH

Indonesia Indonesia ( The Indonesian archipelago has been an important trade region since at least the 7th century, when Srivijaya and then later Majapahit traded with China and India. Local rulers gradually absorbed foreign cultural, religious and political models from the early centuries CE, and Hindu and Buddhist kingdoms flourished. Indonesia consists of hundreds of distinct native ethnic and linguistic groups. Etymology After 1900, the name Indonesia became more common in academic circles outside the Netherlands, and Indonesian nationalist groups adopted it for political expression.[14] Adolf Bastian, of the University of Berlin, popularized the name through his book Indonesien oder die Inseln des Malayischen Archipels, 1884–1894. History A Borobudur ship carved on Borobudur, c. 800 CE. Austronesian peoples, who form the majority of the modern population, migrated to South East Asia from Taiwan. The nutmeg plant is native to Indonesia's Banda Islands. Sukarno, Indonesia's founding President.

Color & Vision Matters The human eye can see 7,000,000 colors. Some of these are eyesores. Certain colors and color relationships can be eye irritants, cause headaches, and wreak havoc with human vision. Other colors and color combinations are soothing. Which color is the most irritating? Yellow, pure bright lemon yellow is the most fatiguing color. In practical application, bright yellow - when used in large areas, will irritate the eyes. Also, beware of bright yellow legal pads (but this may give you a jolt and temporarily wake your brain up) and do not use yellow as a background on your computer monitor. On the other hand, since yellow is the most visible color of all the colors, it is the first color that the human eye notices. Finally, yellow is a wonderful color, the most cheerful of the spectrum. Some tips for practical application: Notice the difference between a yellow of the purest intensity and a softer tint. Find out more about yellow: "The Meanings of Yellow" See red? Instructions: 1. Begin! Ad 1. Ad

Designing for User Habits and Routines - Tuts+ Web Design Article For the last couple of years I’ve been paying close attention to my own habits, looking at my routines to find out what makes me more productive and happier. After deliberately adopting one habit I’d then move onto the next one. Playing with my own routines I’ve decided to allocate some time and write a book. After doing some research, I’ve become very curious as to how habit building theories are applied in designing digital interfaces. According to SocialTimes, 18% of social media users can’t bear to be disconnected for a few hours. “18% of social media users can’t go a few hours without checking Facebook." - SocialTimes (Dec. 30, 2014) In this article, I’d like to dig deeper into the habit building process and how it can be applied when creating interfaces that engage and change people’s behaviour. In The Power of Habit: Why We Do What We Do in Life and Business, Charles Duhigg explains the process of habit creation. A Reward is simply something a person is craving for. Greenfield says.