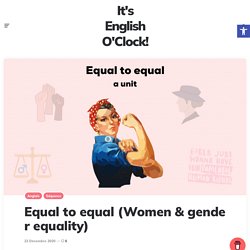 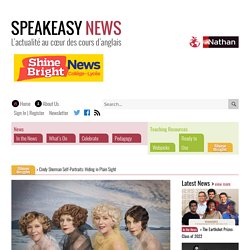 Sherman's thematic self-portraits are a reflection on the portrayal of women in modern society. This is the first solo show dedicated to the artist since her 2006 exhibition at the Jeu de Paume. Initially scheduled to run from April 2 to August 31 but postponed because of the COVID-19 crisis, this retrospective brings together 170 works created by the 66-year-old photographer between 1975 and 2020, including some previously unseen photos. This presentation will end January 3, 2021. Cindy Sherman is well known for exploring female stereotypes through self-portraits. Cindy Sherman was born in 1954 in Glen Ridge, New Jersey, and lives and works in New York. The final part of the exhibition focuses on a new series entitled Men. A Retrospective of Cindy ShermanFondation Louis Vuitton From 23 September 2020 to 3 January 2021. Teaching about U.S. Women’s Fight for the Vote – Speakeasy News. In commemoration of the hundredth anniversary of women obtaining the right to vote in the U.S.A. in 1920, these videos and mini-site provide thought-provoking teaching tools. 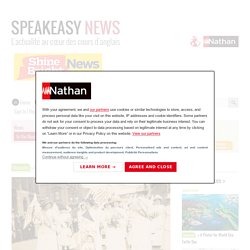 The Belmont-Paul Women's Equality Monument is based in the house in Washington, DC, which has housed the National Women's Party since 1929. It is now run but the National Parks Service, and NPS rangers have made a series of short, simple videos in honour of the suffrage centennial, called Suffrage in Sixty Seconds. This introductory video is a great general introduction usable from B1. For a movement that had its roots in anti-slavery activism, the suffragists were no more immune to racial tensions than the rest of the country. Some early suffrage leaders had in fact opposed the 15th Amendment, which gave black men the vote after the Civil War, arguing that it would be better to fight for an amendment that gave all citizens the vote.

Centennial of Suffrage – Speakeasy News. In 1920, almost 150 years after the United States declared that “all men are created equal,” American women got the right to vote… 27 years after women in New Zealand did. 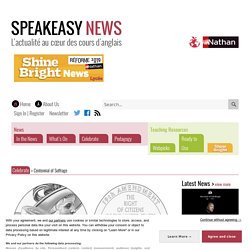 American suffragists worked for almost 80 years to obtain that right. And there’s still work to do today. As is often the case in the United States, the movement progressed state by state before arriving at the national level. In 1869, the state of Wyoming became the first in America where women could vote. A dozen other states, most of them in the West, followed over the years. Everywoman in 1910: No vote, poor pay, little help - Why the world had to change. BBC Radio 4 - Radio 4 in Four, What did the suffragettes do for you? Good Night Stories for Rebel Girls - The Podcast. Downloadable STEM Role Models Posters Celebrate Women Innovators As Illustrated By Women Artists.

Now at the end of its second season, Nevertheless, a truly WYSKy podcast that tells the stories of women who are transforming teaching and learning through technology, “commissioned another four female illustrators from South America, Africa, the Middle East and China” to create a new set of STEM Role Models posters for its growing collection. 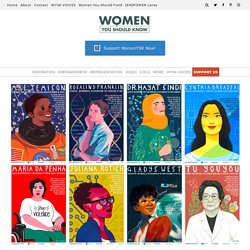 Nevertheless now offers a total of eight inspiring posters, each celebrating a different woman innovator everyone should know, and they’re all available to download now (scroll for larger poster images and download links). ***Editor’s Update 3.08.19: Posters are now available to download in eight languages as part of a special release for International Women’s Day – English, French, French Canadian, German, Italian, Spanish, Portuguese Brazilian, and Simplified Chinese. *** “We’d love you to download the posters and print them out for your school or workplace.

Date : 25 February 2020 Women’s full and equal participation in all facets of society is a fundamental human right. 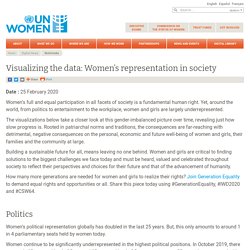 Yet, around the world, from politics to entertainment to the workplace, women and girls are largely underrepresented. The visualizations below take a closer look at this gender-imbalanced picture over time, revealing just how slow progress is. Rooted in patriarchal norms and traditions, the consequences are far-reaching with detrimental, negative consequences on the personal, economic and future well-being of women and girls, their families and the community at large. Building a sustainable future for all, means leaving no one behind.

How many more generations are needed for women and girls to realize their rights? Politics Women’s political representation globally has doubled in the last 25 years. Women continue to be significantly underrepresented in the highest political positions. Work In June 2019, the Fortune 500 hit a milestone with the most women CEOs on record. Sport. Votes for Women. Editions Hatier - feuilletage.