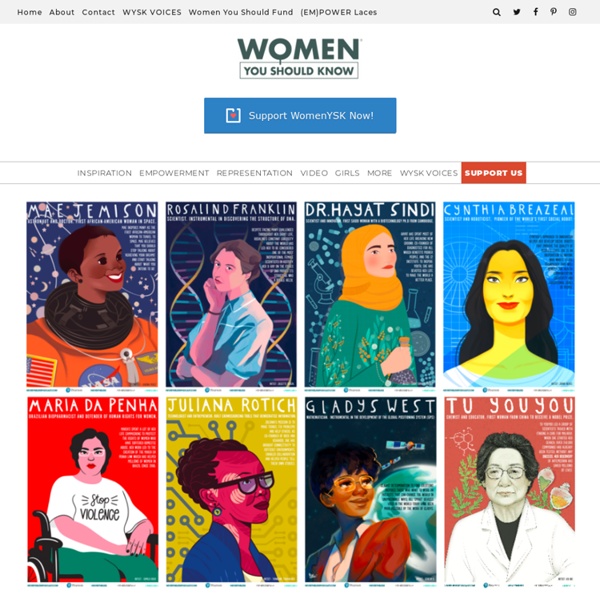 Now at the end of its second season, Nevertheless, a truly WYSKy podcast that tells the stories of women who are transforming teaching and learning through technology, “commissioned another four female illustrators from South America, Africa, the Middle East and China” to create a new set of STEM Role Models posters for its growing collection. Nevertheless now offers a total of eight inspiring posters, each celebrating a different woman innovator everyone should know, and they’re all available to download now (scroll for larger poster images and download links). ***Editor’s Update 3.08.19: Posters are now available to download in eight languages as part of a special release for International Women’s Day – English, French, French Canadian, German, Italian, Spanish, Portuguese Brazilian, and Simplified Chinese. *** “We’d love you to download the posters and print them out for your school or workplace. “We’ll be getting these posted translated into more languages soon. Dr. Dr. Mae C. Dr.

Girls in tech - Curious Minds, He Hihiri i te Mahara Technology in the New Zealand curriculum is defined as intervention by design – the use of practical and intellectual resources to develop products and systems that expand human possibilities by addressing needs and realising opportunities. Technology in action provides students with the opportunity to apply critical thinking and creative problem solving strategies to authentic, real world problems. It is never static but influenced by - and in turn impacts on - the cultural, ethical, environmental, political and economic conditions of the day.

Women in STEM Posters, Series One Home » Women in STEM Posters, Series One Today, the Energy Department rolled out the first set in a series of posters to highlight prominent historical and present-day inventors, astronauts, explorers and mathematicians. Download and print the posters now on any home or office printer for use in classrooms or after-school programs. Visualizing the data: Women’s representation in society Date : 25 February 2020 Women’s full and equal participation in all facets of society is a fundamental human right. Yet, around the world, from politics to entertainment to the workplace, women and girls are largely underrepresented. forrest gump 3ème euro projet étude du film FORREST GUMP (euro class project ) I - THE USA: geographical landmarks - THE USA: historical landmarks 1° the PILGRIM FATHERS 2° THANKSGIVING: who helped the first settlers?..... 3° the independance

The Stories Behind TIME's 100 Women of the Year Covers To mark the role of the 100 Women of the Year in history, we embarked on something historic of our own: creating a TIME cover to recognize each of them. From charcoal portraits to a three-dimensional paper sculpture, from photo collages to fine-art paintings, from wooden sculptures to a quilted fabric image, the art we commissioned reflects the breadth of the 100 choices. Regardless of style, our aim was to find compelling pairings of artist and subject. The project selected a woman or group to represent each year from 1920 to 2019, and our visual approach follows the same arc by re-creating TIME’s cover design as it evolved over the past century—from the illustrative scroll of the 1920s to the iconic red border of today. Each cover is visually emblematic of the period its subject ­represents.

Providing girls with role models for computer science careers / Transitions and vocational pathways / Videos Tim Harford: In the digital technologies programme, we were looking to make connections with industry on areas that were relevant to what we were teaching. We approached a range of companies and we told them what we were looking for. We told them which subjects we studied and what the girls were looking for. We asked if they could help us. All of the companies we approached were very helpful.

Earth - Your life on earth Explore BBC Earth's unique interactive, personalised just to you. Find out how, since the date of your birth, your life has progressed; including how many times your heart has beaten, and how far you have travelled through space. Investigate how the world around you has changed since you've been alive; from the amount the sea has risen, and the tectonic plates have moved, to the number of earthquakes and volcanoes that have erupted. Grasp the impact we've had on the planet in your lifetime; from how much fuel and food we've used to the species we've discovered and endangered.

Centennial of Suffrage – Speakeasy News In 1920, almost 150 years after the United States declared that “all men are created equal,” American women got the right to vote… 27 years after women in New Zealand did. American suffragists worked for almost 80 years to obtain that right. And there’s still work to do today. As is often the case in the United States, the movement progressed state by state before arriving at the national level. In 1869, the state of Wyoming became the first in America where women could vote. A dozen other states, most of them in the West, followed over the years.

Brittany Teei - Curious Minds, He Hihiri i te Mahara Brittany Teei (Rarotonga, Avatiu, Atiu, Ngāi Tahu) is Co-founder of KidsCoin, an educational software program that teaches children good money habits. What do you do on an average work day? There’s no such thing as an average workday for me! I do many varied tasks and jobs ranging from working with developers on website development, to planning out UX [user experience] and UI [user interface] designs, to social media marketing and working in the communities. It really depends on the needs of the business and what the priorities are at the time. Lawrence Hall of Science - 24/7 Science How fast does the wind blow? What makes things sticky? Where do insects live and plants grow? What is the best way to clean up the environment? Teaching about U.S. Women’s Fight for the Vote – Speakeasy News In commemoration of the hundredth anniversary of women obtaining the right to vote in the U.S.A. in 1920, these videos and mini-site provide thought-provoking teaching tools. The Belmont-Paul Women's Equality Monument is based in the house in Washington, DC, which has housed the National Women's Party since 1929. It is now run but the National Parks Service, and NPS rangers have made a series of short, simple videos in honour of the suffrage centennial, called Suffrage in Sixty Seconds.

1917 – Speakeasy News The new World War I drama from director Sam Mendes, 1917, unfolds in real-time, tracking a pair of British soldiers as they cross the Western Front on a desperate rescue mission. Soldiers Blake and Schofield must travel nine miles across the treacherous war zone to deliver orders to stop a regiment attacking enemy lines within the next 24 hours. If they fail to do so, 1,600 British lives will be lost, including Blake’s brother.