How to Make Difficult Conversations Easy: 7 Steps From a Clinical Psychologist 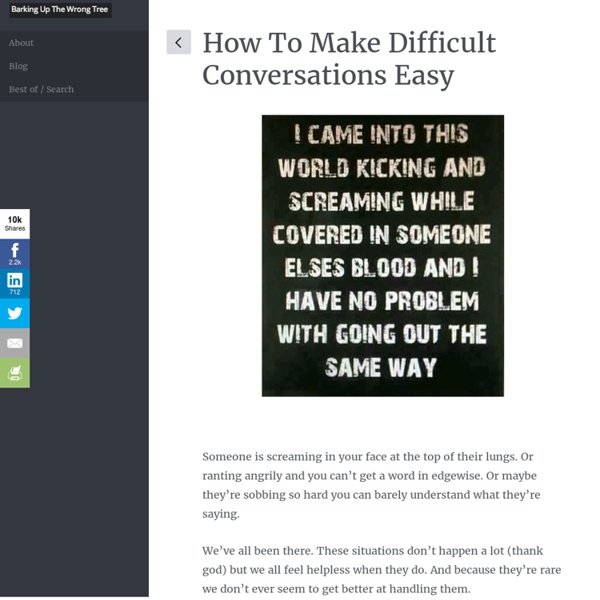 Someone is screaming in your face at the top of their lungs. Or ranting angrily and you can’t get a word in edgewise. Or maybe they’re sobbing so hard you can barely understand what they’re saying. We’ve all been there. These situations don’t happen a lot (thank god) but we all feel helpless when they do. Problem is, these moments are often critical because they’re usually with people we care about. What’s the best way to handle these difficult conversations? I called someone who knows: Dr. Dinosaur Brains: Dealing with All Those Impossible People at Work Am I The Only Sane One Working Here? Emotional Vampires: Dealing With People Who Drain You Dry Here’s what you’ll learn in this post: The magic phrase that gets people to stop yelling.How to stop making the most common mistake in these kind of discussions.How to switch people from being emotional to being rational.The mindset that makes dealing with hysterical people easy.And a lot more. Okay, time to wage war with the crazy. You’re calm. Related:  Curiosidades • Coping

Aquaculture Solaiman Sheik shows off the harvest from his father’s small pond near Khulna, Bangladesh: freshwater prawns, a profitable export. The family also raises fish in the pond and, in the dry season, rice fertilized by fish waste—a polyculture that has tripled output with little environmental downside. Photograph by Jim Richardson In a dark, dank warehouse in the Blue Ridge foothills of Virginia, Bill Martin picks up a bucket of brown pellets and slings them into a long concrete tank. Fat, white tilapia the size of dinner plates boil to the surface. Martin, president of Blue Ridge Aquaculture, one of the world’s largest indoor fish farms, smiles at the feeding frenzy. By Joel K. Photographs by Brian Skerry “This is St. “How do you know they’re happy?” “Generally they show they’re not happy by dying,” Martin says. An industrial park in Appalachia may seem an odd place to grow a few million natives of the Nile. There are good reasons to be wary. But those goals are still a few years away.

Brené Brown on what people who rise strong from their facedown moments have in common, Grace Paley on the art of growing older, and more Hello, Peggy Fleming! If you missed last week's edition – Willa Cather on happiness, a breathtaking anatomy of sadness illustrated by Quentin Blake, Borges on success, and more – you can read it right here; if you missed my eulogy for the late, great Oliver Sacks, that's here. And if you're enjoying this, please consider supporting with a modest donation – every little bit helps, and comes enormously appreciated. Rising Strong: Brené Brown on the Physics of Vulnerability and What Resilient People Have in Common “There is no science without fancy, and no art without facts,” Vladimir Nabokov famously proclaimed. Today, hardly anyone embodies this sentiment more fully than Brené Brown, who came of age as a social scientist in an era when the tyranny of facts trivialized the richness of fancy and the human experience was squeezed out of the qualitative in the service of the quantitative, the two pitted as polarities. Art by Lisbeth Zwerger for a rare edition of The Wizard of Oz Brown writes:

‘Quirkyalone’ Is Still Alone Photo Lately I’ve been having a lot of conversations with friends who find themselves still single in their 30s and 40s and are starting to worry that it’s not those swinish men/crazy women or New York City’s cruelly Darwinian dating scene or bad luck. It’s just them. “I keep giving myself to people, and they don’t seem to want me,” one of my friends said after her last breakup. Another, crying at her dining room table because she hadn’t had a “real” relationship in years, said, “I must be doing something wrong.” My friend Jasmine, who has been engaged to two men and married to a third, describes herself as perennially single. We marvel at how most people, including many who seem less datable than us, successfully manage this simple trick — maintaining relationships — that we can’t seem to pull off. It would be easy for a glib armchair analyst to conclude that although these people think they want to be in lasting relationships, on some level they really don’t or else they would be by now.

Elusive acid finally created After more than a century of searching, chemists have finally nabbed a legendary acid. The acid called cyanoform or tricyanomethane appears widely in textbooks as one of the strongest carbon-based acids known. Yet despite attempts to make the acid dating back to 1896, cyanoform has evaded chemists until now. The main problem was temperature, says coauthor Andreas Kornath, an inorganic chemist at Ludwig Maximilian University of Munich. The acid has a central carbon atom attached to a hydrogen atom as well as to three cyano groups, each consisting of a carbon triple-bonded to a nitrogen. ACID NAB Cyanoform, a chemical written into textbooks as one of strongest carbon-based acids, has finally been isolated by chemists after more than a century of attempts. But at room temperature, cyanoform simply decomposes, quickly forming junk molecules, Kornath says. This is probably what happened in 1896 when chemist Hermann Schmidtmann tried to make cyanoform.

10 Clever Tricks to Trigger Positive Emotions People who see the glass half-full are certainly happier than the pessimists of the world, and learning to think positively is worthwhile. However, changing the way you think can be surprisingly tricky, especially when the going gets tough. What if there were a way—a shortcut or hack—that positively affected how you feel when you just can’t seem to shake the blues? A few years ago, I came across a simple idea that has been validated in hundreds of experiments and has given rise to quick and effective exercises that can help you feel happier, avoid anxiety, increase your willpower, deepen relationships and boost confidence. The idea dates back to the turn of the 20th century and to the work of Victorian philosopher William James. According to James’s theory, forcing your face into a smile should make you feel happy, and frowning should make you feel sad. In the late 1960s, psychologist James Laird from the University of Rochester stumbled across James’s theory and decided to test it. 1.

30 Questions to Ask Yourself Before You Die. {Via studioflowerpower on etsy} “Rather than money, than fame, than love…give me truth.” ~ Thoreau I woke up this morning and my life clock marked 30. My first sleep-deprived idea was to pack a small suitcase, get on the first train, move to another country, change my name, change my hair color (or get plastic surgery if needed), and start from scratch. When I don’t know how to deal with life, I hide sometimes. By now, I’m good at both: fighting and disappearing. A true warrior doesn’t feel forced to do either, but moves through and with and for life, like water. So after I washed my face and considered the costs of running and those of fighting, I decided to do neither and have some juice instead. {Alkaline Espresso / Click for recipe.} We are a constant process, an event, we’re change. As such, our smaller houses, our temporary homes can only be made of cards. Loving the questions means to love yourself. So here is an exercise we can do together: a tweak to your usual bucket list. You.

Leaf Is A “Plug N’ Plant” Box To Automatically Grow Pot In Your Home Marijuana is a sticky subject. Twenty-three states (and D.C) have legalized some form of medical use, but possession, growth and distribution are still illegal in the majority of the United States. However, as is the case with most new industries, slow regulation hasn’t stopped innovation. Leaf, a TechCrunch Disrupt SF 2015 Battlefield company, is leading the revolution with its automated “Plug N’ Plant” home growing system. However, Leaf is much more than just a mini grow house. The system will also react to these measurements, meaning that if it senses that your plants are low on nutrients it can dispense more, or if it needs more light it can automatically brighten the environment. This is all controlled from Leaf’s iPhone app, which will also serve as a social network for users to exchange recipes and share videos of their plants. Leaf has received a strategic investment from Advanced Nutrients, a major player in the cannabis nutrient space. However, this technology comes at a cost.