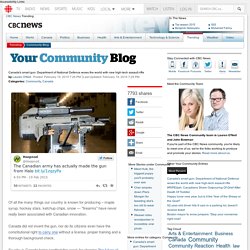 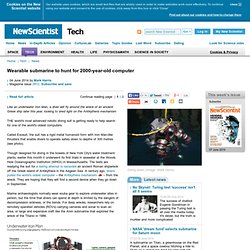 Armadillo Scooter Wear. Synthetic Muscle Made of Fishing Line is 100 Times Stronger Than the Real Thing. The newest material used to make artificial muscle can lift more than 100 times more than the meaty stuff you have stuck to your skeleton. 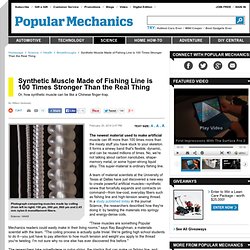 It forms a sinewy band that's flexible, dynamic, and can be reused millions of times. No, we're not talking about carbon nanotubes, shape-memory metal, or some hyper-strong liquid alloy. The Next Iron Man is YOU: Science Friction Ep 1. 'Robo-suit' lets man lift 100kg - BBC News. Obama jokes about creating 'Iron Man,' but military is already doing it. President Obama dropped quite the news at a press conference this Tuesday: "Basically," he said, "I'm here to announce that we're building Iron Man. 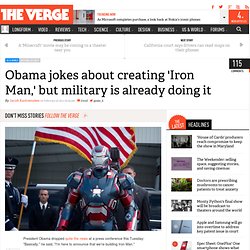 " Of course, the president was only joking — he was really announcing the creation of high-tech manufacturing hubs — but that doesn't mean there wasn't a sliver of truth in it. The United States government has in fact been creating a suit designed to give its wearer superhuman strength and perception. RF Safe-Stop shuts down car engines with radio pulse. 3 December 2013Last updated at 08:11 ET By Chris Vallance BBC Radio 4, PM Andy Bennett, of E2V, shows how the device works at Throckmorton Airfield, in Worcestershire A British company has demonstrated a prototype device capable of stopping cars and other vehicles using a blast of electromagnetic waves. 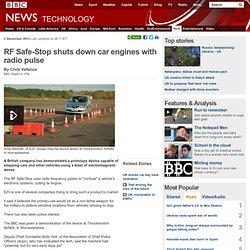 The RF Safe-Stop uses radio frequency pulses to "confuse" a vehicle's electronic systems, cutting its engine. E2V is one of several companies trying to bring such a product to market. It said it believed the primary use would be as a non-lethal weapon for the military to defend sensitive locations from vehicles refusing to stop. There has also been police interest. Navy Deploying Laser Weapon Prototype in Persian Gulf. WASHINGTON — The Navy is going to sea for the first time with a laser attack weapon that has been shown in tests to disable patrol boats and blind or destroy surveillance . 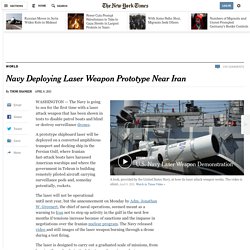 A prototype shipboard laser will be deployed on a converted amphibious transport and docking ship in the Persian Gulf, where Iranian fast-attack boats have harassed American warships and where the government in Tehran is building remotely piloted aircraft carrying surveillance pods and, someday potentially, rockets. The laser will not be operational until next year, but the announcement on Monday by Adm. Jonathan W. Super-soldiers are About to Arrive Soon - T.A.L.O.S. embodies at some level the idea of the perfect soldier: stronger, faster, and invulnerable to bullets. 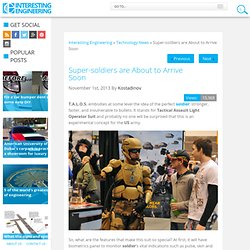 It stands for Tactical Assault Light Operator Suit and probably no one will be surprised that this is an experimental concept for the US army. Ballistic vest. Metal or ceramic plates can be used with a soft vest, providing additional protection from rifle rounds, and metallic components or tightly woven fiber layers can give soft armor resistance to stab and slash attacks from knives and similar close-quarter weapons. 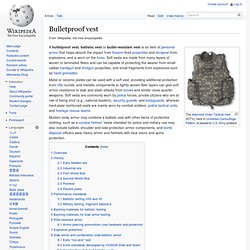 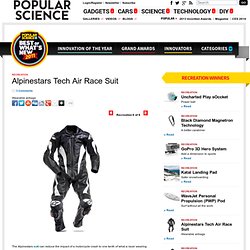 I am Iron Man: Top 5 Exoskeleton Robots. Bionic Suit Lets Paralyzed Patients Take First Steps Again. This week, Aaron Bloom did something he hasn't been able to do since his accidental fall in July 2010: he took a walk. 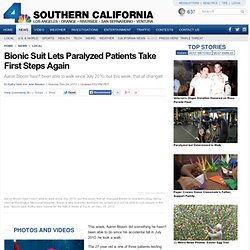 The 27 year old is one of three patients testing the Ekso, a battery-powered bionic suit or exoskeleton, which is strapped over his clothing. "I don't really need anybody holding on to me," he said. "I can lift my hands up and put a little weight through these crutches, and feel pretty comfortable. " Huntington Memorial Hospital is the first hospital in Southern California to offer this new technology to patients. Warrior Web Prototype Takes Its First Steps. May 22, 2013. 'Iron Man' Exoskeletons Go Soft. Forget Iron Man armor and exoskeletons. They're so last year. This season, augmenting human strength has moved to stretchable, flexible suits. The Defense Advanced Research Projects Agency has shelled out $2.6 million to Harvard's Wyss Institute of Biologically Inspired Engineering to build a "smart suit" that enhances the strength of soldiers in the field. BLOG: Man Implants Magnets In Arm To Hold iPod The amount of gear that the average trooper has to carry — in addition to the body armor — has gone up in the past few years.

Circuits that are integrated with your skin. At least from what's being shown in this article, I doubt such circuitry would be so deeply enmeshed with your own nervous system. It would have to be deeply enmeshed at the spinal level at the very least to do what you're thinking. As for risks of cracking, well, no system is foolproof especially our own natural ones despite eons of evolution. Rabies, spinal meningitis and a huge array of microbial "hacking" have been screwing us over for millions of years now. I assume when such risks become possible, we develop ways to defend against them. Basic computer and network security practices are a good start. Metal muscle 1000x human strength. Published time: December 22, 2013 16:46 Edited time: December 24, 2013 08:37 Screenshot from YouTube user Berkeley Lab American scientists have developed a robotic muscle 1,000 times more powerful than a human’s – using a revolutionary material that fluidly changes its properties.

The invention gives vanadium dioxide amazing, superhero-style powers. Its most striking property is to change shape and structure whenever differing amounts of heat are applied to it. This made it perfectly suited for creating a torsional motor muscle, as researchers at the US Department of Energy’s (DOE) Lawrence Berkeley National Laboratory have found, the Lab’s website reported. Added to this is the material’s capacity for changing size and other physical characteristics. Image from newscenter.lbl.gov.

Related:  Technology   -  IRON MAN: SOUL, MIND & BODY   -  Diary of a Not So Mad Man   -  Being a Human Being, a Person, and a Man   -  A Man for All Seasons (1966)   -  Cheng Man Ching   -  NONPROFIT MAN   -  Iron supplements and food   -  Iron for Veggies   -  Man-made Home   -  Burning Man   -  On Being a "Real" Man   -  IRON   -  The Age of Man   -  Imminent Threat Solutions | Prevail Against All Threats   -  Minimalissimo – Minimalism in Design   -  Living Instructables   -  Demolition of the Paris Metro | urban exploration | sleepycity   -  English Reformation - Wikipedia, the free encyclopedia   -  Awwwards Sites Of The Month   -  How to Increase Testosterone Naturally   -  Heading Out on Your Own: 31 Life Skills in 31 Days — Series Wrap-Up | The Art of Manliness   -  How to Memorize Anything | The Art of Manliness   -  How to Create a Lifelong Brotherhood   -  101 Household Tips for Every Room in your Home | Glamumous!   -  There's Something Absolutely Wrong With What We Do To Boys Before They Grow Into Men   -  Photos of Abandoned Places and Urban Exploration   -  Forbidden Places: base de données d'exploration urbaine   -  The problem isn’t that life is unfair – it’s your broken idea of fairness   -  How to Develop the Situational Awareness   -  Education   -  Enterprise