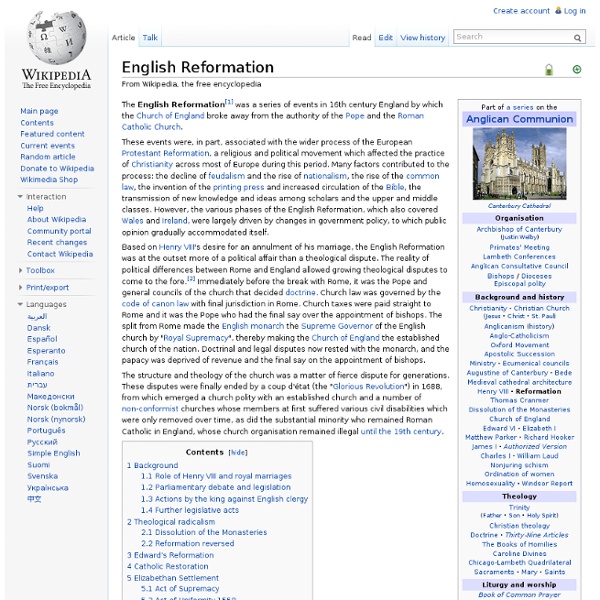 The English Reformation was a series of events in 16th century England by which the Church of England broke away from the authority of the Pope and the Catholic Church. These events were, in part, associated with the wider process of the European Protestant Reformation, a religious and political movement that affected the practice of Christianity across most of Europe during this period. Many factors contributed to the process: the decline of feudalism and the rise of nationalism, the rise of the common law, the invention of the printing press and increased circulation of the Bible, the transmission of new knowledge and ideas among scholars, the upper and middle classes and readers in general. However, the various phases of the English Reformation, which also covered Wales and Ireland, were largely driven by changes in government policy, to which public opinion gradually accommodated itself. Church taxes were paid straight to Rome, and the Pope had final say over appointment of bishops.

Protestant Reformation Although the core motivation behind these changes was theological, many other factors played a part, including the rise of nationalism, the Western Schism which eroded people's faith in the Papacy, the corruption of the Curia, and the new learning of the Renaissance which questioned much traditional thought. On a technological level the invention of the printing press proved extremely significant in that it provided the means for the rapid dissemination of new ideas. The Roman Catholic Church responded with a Counter-Reformation initiated by the Council of Trent and spearheaded by the new order of the Society of Jesus (Jesuits) specifically organized to counter the Protestant movement. In general, Northern Europe, with the exception of most of Ireland, turned Protestant. Religious situation in Europe[edit] History and origins[edit] Earlier schisms[edit] 16th century[edit] Parallel to events in Germany, a movement began in Switzerland under the leadership of Ulrich Zwingli. Literacy[edit]

Chapter 8: Sacred Music in the Era of the Reformation | Concise History of Western Music, 4: W. W. Norton StudySpace Prelude. (CHWM 152–53) The Reformation set in motion a rebellion against the authority of the Catholic Church. It brought new types of religious music, including chorales and chorale settings in the Lutheran Church and Psalters in Calvinist churches. I. Luther’s views Martin Luther (1483–1546) was a professor of biblical theology whose arguments that God offers salvation through faith alone and that religious authority comes from the Bible alone posed a challenge to the authority of the Catholic Church. II. Calvin’s views Jean Calvin (1509–1564) led a Protestant movement in France, the Low Countries, and Switzerland that rejected papal authority and accepted predestination. III. Council of Trent At the Council of Trent (1545–63), Catholic Church officials met to address abuses within the church.

The Reformation Online - The Most Timely, Scientific, and Patriotic Site on the Internet Black Death Spread of the Black Death in Europe (1346–53) The Black Death is thought to have originated in the arid plains of central Asia, where it then travelled along the Silk Road, reaching the Crimea by 1343.[6] From there, it was most likely carried by Oriental rat fleas living on the black rats that were regular passengers on merchant ships. Spreading throughout the Mediterranean and Europe, the Black Death is estimated to have killed 30–60% of Europe's total population.[7] In total, the plague reduced the world population from an estimated 450 million down to 350–375 million in the 14th century. The aftermath of the plague created a series of religious, social, and economic upheavals, which had profound effects on the course of European history. It took 150 years for Europe's population to recover. Chronology Origins of the disease Plague was reportedly first introduced to Europe at the trading city of Caffa in the Crimea in 1347. European outbreak Middle Eastern outbreak Symptoms Naming Causes

Renaissance Era - Vocal As of July 1, 2013 ThinkQuest has been discontinued. We would like to thank everyone for being a part of the ThinkQuest global community: Students - For your limitless creativity and innovation, which inspires us all. Teachers - For your passion in guiding students on their quest. Partners - For your unwavering support and evangelism. Parents - For supporting the use of technology not only as an instrument of learning, but as a means of creating knowledge. We encourage everyone to continue to “Think, Create and Collaborate,” unleashing the power of technology to teach, share, and inspire. Best wishes, The Oracle Education Foundation

Thirty Years' War The Thirty Years' War (1618–1648) was a series of wars principally fought in Central Europe, involving most of the countries of Europe.[10] It was one of the most destructive conflicts in European history, and one of the longest continuous wars in modern history. Initially, religion was a motivation for war as Protestant and Catholic states battled it out even though they all were inside the Holy Roman Empire. Changing the relative balance of power within the Empire was at issue. A major consequence of the Thirty Years' War was the devastation of entire regions, denuded by the foraging armies (bellum se ipsum alet). The Thirty Years' War was ended with the treaties of Osnabrück and Münster, part of the wider Peace of Westphalia.[13] Some of the quarrels that provoked the war went unresolved for a much longer time. Origins of the War[edit] The rulers of the nations neighboring the Holy Roman Empire also contributed to the outbreak of the Thirty Years' War: The Bohemian Revolt[edit]

Reformed Church Music 1. Introduction The Christian church did not separate theology and music. It is useful to model ourselves on the theological thoughts about music of the early church. 2. The vision of Aurelius Augustine (345 - 430) on church music had large impact on the music of the church. - He promoted the singing of praises to God; - Augustine stressed the importance of singing not just with the mouth, but also with the heart and deeds. - The praise in singing is a foretaste of the abundant joy of our prospective live on the new earth. 3. The mathematical approach of the ancient times and Middle Ages was discontinued after the Reformation. Calvin says in his sermon about Psalm 148 that the sun and other created things can not produce any sound by themselves, that we can notice, since they have no understanding of the beauty God laid in them. 4. Until the 16th century music was approached by way of theology.

The Reformation Brings New Approach to Sacred Music The Reformation Brings New Approach to Sacred Music As the Protestant Reformation swept across Europe, those who rebelled against Catholicism cast their new forms of worship in opposition to the Catholic Mass—including its music. How sacred music developed as part of the Reformation was explored in a presentation on Sept. 22 by Jane Dawson, Ph.D., the John Laing Professor of Reformation History at Edinburgh University’s School of Divinity. By the late Middle Ages, Dawson said, the performance of sacred music was relegated mainly to professionals who could understand its elaborate polyphonic structure. Protestant reformers, however, feared the power of music to influence and distract, so they entered the notion that church music must serve the words—because the words were the word of God. "They also stipulated that words should be audible and that the language must be comprehensible," Dawson said. For the first time, Scots were singing together in church.

Music and the Counter Reformation The Council of Trent To respond to the influence of Protestantism with its emphasis on unmediated, individual devotion, the Roman Catholic curia convened the many sessions which together are known as the Council of Trent. In the context of reforming the liturgy, the church laid down precepts governing how music should be conceived and set. While reflecting the views of St. Augustine who felt that the beautiful sound of music could overwhelm contemplation of the meaning of the text, the reforms were also influenced by the humanist perspective on the power inherent in text. Bishop Cirillo Franco in a letter of 1549 stated the problems of the old style: I should like, in short, when a Mass is to be sung in church, that its music be framed according to the fundamental subject of the words, in harmonies and rhythms apt to move our affections to religion and piety, and likewise in Psalms, Hymns, and other praises that are offered to God..... Index

Medici: Godfathers of the Renaissance . Renaissance . Counter Reformation Throughout the middle ages the Catholic Church sunk deeper into a pit of scandal and corruption. By the 1520s, Martin Luther's ideas crystallized opposition to the Church, and Christian Europe was torn apart. In response, the Catholic Church set in motion the counter-reformation. An era of strict conformity and accompanying terror had begun. During the reign of Pope Leo X, discontent amongst Catholics in Europe was at an all-time high. The sale by the Pope of indulgences, a guarantee of salvation, was the last straw. The challenge from Luther caught the Pope by surprise. In 1545, the leaders of the Catholic Church gathered in the Northern Italian city of Trent for an emergency conference. After 20-years of debate, the Council of Trent established the basis for a Catholic counter-attack. The “Index of Forbidden Books” was published, naming and shaming 583 heretical texts, including most translations of the Bible and the works of Erasmus, Calvin and Luther.