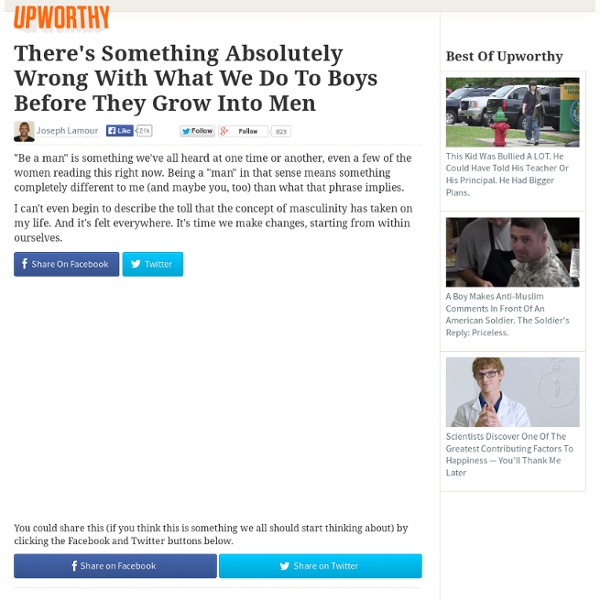 Related:  Igualdad de género • Being a Human Being, a Person, and a Man

IPIP NEO-PI, Introductory Information Best estimates indicate that the 300-item version of the IPIP-NEO produces a report over 99% of the time. Computer experts have been unable to identify the software or hardware malfunctions that sometimes prevent successful scoring and feedback. Spending 30-40 minutes answering 300 questions but getting no feedback can leave you angry and frustrated. If you have problems getting results or prefer to invest less time taking the test, you can take the shorter version. Although you are not required to answer all of the items, skipping items will lower your scores. In particular, missing responses may lower the 30 facet scores dramatically. How I Wish the Homosexuality Debate Would Go Just once, I’d like to see a TV interview go more like this: Host: You are a Christian pastor, and you say you believe the Bible, which means you are supposed to love all people. Pastor: That’s right.

Dustin Hoffman Breaks Down Crying Explaining Something That Every Woman Sadly... Dustin Hoffman - Actor TOOTSIE, RAIN MAN, THE GRADUATE Dustin Hoffman: Murray Schisgal, who has been my dear friend for over 30 years, kicked off "Tootsie" with the thought of how would you be different if you had been born a woman? It was in a conversation we had one time. Not what does it feel like to be a woman? All sexes have asked themselves the question, "What would it feel like to be the opposite sex?" His question was different.

Leading Men Age, But Their Love Interests Don’t Yesterday, Kristen Stewart fell out of the con-artist comedy Focus after Will Smith replaced Ben Affleck as the male lead; according to Variety, she was nagged by "the feeling that the age difference between the two would be too large a gap." For the record, Smith is a mere four years older than the 40-year-old Affleck, and if it seems a little odd that either of them would be considered a romantic partner for the 23-year-old Stewart in the first place … well, welcome to Hollywood. It seems like time and time again, male movie stars are allowed to age into their forties, fifties, and even sixties while the ages of their female love interests remain firmly on one side of the big 4-0, but is this a perception borne out of reality? To find out for sure, Vulture has analyzed the data of ten middle-aged leading men and the ages of the women they've wooed onscreen; you'll see the results in the charts below. How'd we arrive at our conclusions? Scroll down to check out our findings in-depth.

Mapping Emotions On The Body: Love Makes Us Warm All Over : Shots - Health News People drew maps of body locations where they feel basic emotions (top row) and more complex ones (bottom row). Hot colors show regions that people say are stimulated during the emotion. Cool colors indicate deactivated areas. Image courtesy of Lauri Nummenmaa, Enrico Glerean, Riitta Hari, and Jari Hietanen. Watch A Student Totally Nail Something About Women That I've Been Trying To A... Lily Myers: Across from me at the kitchen table, my mother smiles over red wine that she drinks out of a measuring glass. She says she doesn't deprive herself, but I've learned to find nuance in every movement of her fork. In every crinkle in her brow as she offers me the uneaten pieces on her plate. I've realized she only eats dinner when I suggest it. I wonder what she does when I'm not there to do so. Maybe this is why my house feels bigger each time I return; it's proportional.

The 9-Step Checklist Mr. Rogers Used for Talking to Children The manual was presented as a nine-item checklist for translating everyday English into Freddish. Per the pamphlet, Rogers' guide to talking to kids goes as follows: 1. The Ten Most Revealing Psych Experiments Psychology is the study of the human mind and mental processes in relation to human behaviors - human nature. Due to its subject matter, psychology is not considered a 'hard' science, even though psychologists do experiment and publish their findings in respected journals. Some of the experiments psychologists have conducted over the years reveal things about the way we humans think and behave that we might not want to embrace, but which can at least help keep us humble. That's something. 1.

The Most Honest And Heartbreaking Reason To Leave Your Front Door Unlocked I've Ever Heard The first time I saw her... Everything in my head went quiet. All the tics, all the constantly refreshing images just disappeared. 9 Facts That Prove Traditional Definitions Of Gender Roles Are Bullsh*t Remember the good old days when men were men and women were women? You know, when the manliest of men wore their hair long and curly with their best high heels. Oh, maybe you were imagining a slightly different picture of modern gender? Consider the earring. Associated exclusively with women for about 200 years, guys have recently started to reclaim them. "In the last two decades," Valerie Steele, director of the Museum at the Fashion Institute of Technology, told The Huffington Post, "men have gotten in touch with their inner pirate."

Want To Improve Your Mental Toughness? Try This Exercise 3 min read No matter how prepared you are and how much you plan, things will still go wrong. Often, people say, “I’ll deal with a setback when it happens.” It’s a better mindset than always worrying about everything that could happen. However, it’s also naïve.

Related:
Related:  Igualdad de género   -  Being a Human Being, a Person, and a Man   -  Iron Man   -  A Man for All Seasons (1966)   -  Cheng Man Ching   -  NONPROFIT MAN   -  Man-made Home   -  Burning Man   -  Person Self Social   -  Imminent Threat Solutions | Prevail Against All Threats   -  Living Instructables   -  English Reformation - Wikipedia, the free encyclopedia   -  Awwwards Sites Of The Month   -  How to Increase Testosterone Naturally   -  Heading Out on Your Own: 31 Life Skills in 31 Days — Series Wrap-Up | The Art of Manliness   -  How to Memorize Anything | The Art of Manliness   -  How to Create a Lifelong Brotherhood   -  101 Household Tips for Every Room in your Home | Glamumous!   -  Photos of Abandoned Places and Urban Exploration   -  The Apple Game: How Good a Person Are You?   -  Body Language that Shows when someone of the Opposite Sex Fancies you by Bridget Webber | Relating 360   -  Forbidden Places: base de données d'exploration urbaine   -  The problem isn’t that life is unfair – it’s your broken idea of fairness   -  How to Develop the Situational Awareness