Neo Techno Ethica. Living Safely with Robots, Beyond Asimov's Laws. (PhysOrg.com) -- "In 1981, a 37-year-old factory worker named Kenji Urada entered a restricted safety zone at a Kawasaki manufacturing plant to perform some maintenance on a robot. 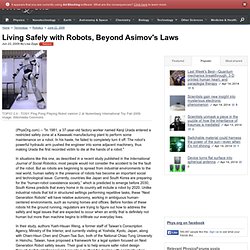 In his haste, he failed to completely turn it off. The robot’s powerful hydraulic arm pushed the engineer into some adjacent machinery, thus making Urada the first recorded victim to die at the hands of a robot. " In situations like this one, as described in a recent study published in the International Journal of Social Robotics, most people would not consider the accident to be the fault of the robot. But as robots are beginning to spread from industrial environments to the real world, human safety in the presence of robots has become an important social and technological issue.

Currently, countries like Japan and South Korea are preparing for the “human-robot coexistence society,” which is predicted to emerge before 2030; South Korea predicts that every home in its country will include a robot by 2020. Brian Litt and Brain-Computer Interfaces: Past, Present and Future - (Build 20100722150226) Building Gods. This film by Ken Gumbs tackles the issue of pending greater-than-human artificial intelligence and the possible ramifications. 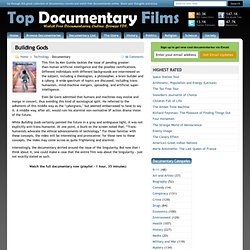 Different individuals with different backgrounds are interviewed on the subject, including a theologian, a philosopher, a brain builder and a cyborg. A wide spectrum of topics are discussed, including trans-humanism, mind-machine mergers, uploading, and artificial super-intelligence. Even De Garis admitted that humans and machines may evolve and merge in concert, thus avoiding this kind of sociological split.

He referred to the adherents of this middle way as the ‘cyborgians,’ but seemed embarrassed to have to say it. A middle way, after all, would ruin his alarmist non-normative SF action drama vision of the future. While Building Gods certainly painted the future in a gray and ambiguous light, it was not explicitly anti-trans-humanist. Interestingly, the documentary skirted around the issue of the Singularity. Machine Super Intelligence - Shane Legg on AI [UKH+] (3/12) (Build 20100722155716) Plug & Pray - Documentary film - Artificial Intelligence - [[[maschafilm]]]

Machine Intelligence, Part II: From Bumper Cars to Electronic Minds. I am a musical robot. So my lesson plan this week is about robots. 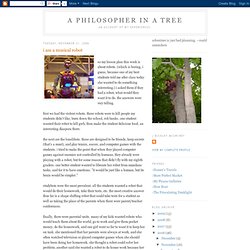 (which is boring, i guess, because one of my best students told me after class today she wanted to do something interesting.) i asked them if they had a robot, what would they want it to do. the answers were very telling. first we had the violent robots. these robots were to kill people my students didn't like, burn down the school, rob banks. one student wanted their robot to kill gwb, then make the student delicious food. an interesting diaspora there. the next are the lonelibots. these are designed to be friends, keep secrets (that's a must), and play tennis, soccer, and computer games with the students. i tried to make the point that when they played computer games against enemies not controlled by humans, they already were playing with a robot, but for some reason that didn't fly with my eighth graders. one better student wanted to liberate her robot from mundane tasks, and for it to have emotions. 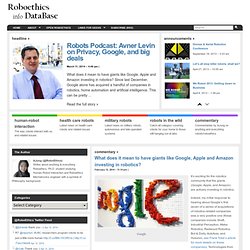 Indeed, my initial response to hearing about Google’s first seven of a series of acquisitions of robotics-related companies was a very positive one (these companies include Shaft, Industrial Perception, Meka Robotics, Redwood Robotics, Bot & Dolly, Autofuss, and Holomni, see Frank Tobe’s article for more details on these companies). Technologies from these companies are ones that can make robots mobile, perceptive, responsive, and interactive. The fact that the companies are now housed under one giant roof of Google made me imagine a future of next generation robots where Google-branded humanoids will be the next Baxter, working shoulder-to-shoulder with people in dynamic manufacturing environments, or assisting caregivers and serving seniors at care facilities.

Then I began to feel a little bit uneasy when Google acquired Boston Dynamics. Seriously? Issues.