Cherry picking advertising and not paying for the journalism - S. Posted by Tom Foremski - May 17, 2006 Google can sell advertising for much less because it doesn't have to pay for any journalism. 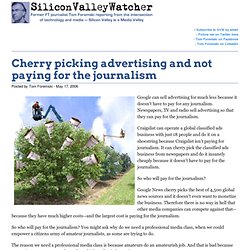 Newspapers, TV and radio sell advertising so that they can pay for the journalism. Craigslist can operate a global classified ads business with just 18 people and do it on a shoestring because Craigslist isn't paying for journalism. Disclosures « BuzzMachine. JEFF JARVIS is the author of Geeks Bearing Gifts: Imagining New Futures for News (CUNY Journalism Press, 2014), Public Parts: How Sharing in the Digital Age Improves the Way We Work and Live (Simon & Schuster, 2011), What Would Google Do? 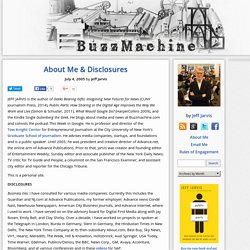 (HarperCollins 2009), and the Kindle Single Gutenberg the Geek. He blogs about media and news at Buzzmachine.com and cohosts the podcast This Week in Google. He is professor and director of the Tow-Knight Center for Entrepreneurial Journalism at the City University of New York’s Graduate School of Journalism. Center for Sustainable Journalism. New media ventures blossom in Seattle. News is ever-changing, and the business of covering it is growing -- especially in Seattle. 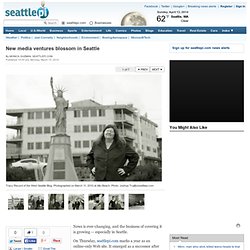 On Thursday, seattlepi.com marks a year as an online-only Web site. It emerged as a successor after the Seattle Post-Intelligencer newspaper ceased publication on March 17, 2009. But seattlepi.com is hardly the only new kid in town. More and more online news ventures are finding an audience in Seattle, a city known for tech savvy and an affinity for entrepreneurial innovation. How Social Data & Mobile Tech Can Improve the Retail Experience. Sandeep Bhanote is CEO of Global Bay Mobile Technologies, a provider of next generation mobile retail software to top retailers including Guess Jeans, True Religion, City Sports, and many others. 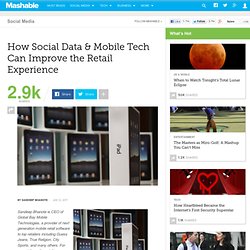 For more information, visit globalbay.com or follow @GlobalBay on Twitter. Do you remember when your favorite retailer didn’t have a website? Can you imagine not being able to find your favorite store online today? Unthinkable, right? It’s not surprising that today’s shoppers are becoming increasingly digitally savvy. The good news is that forward-looking retailers are already integrating digital, mobile and social media technology into their brick-and-mortar sales strategies as a means to connect with these digitally savvy consumers and drive real value to their bottom line. Here are five ways retailers will be using mobile and social media to change the way we shop in 2011, both in-store and online. Economics of Cooperation/Sharing Economies.

HOW TO: Create a World-Class Online Community for Your Business. Name the companies that set the standards for social media use in business. 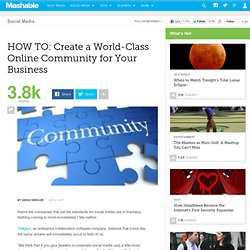 Nothing coming to mind immediately? Me neither. Telligent, an enterprise collaboration software company, believes that some day the same answer will immediately occur to both of us. The Shady Marketing Scheme That's Buying Off Your Favorite Bloggers. Has content become advertising for advertising? Since the advent of the Web, online publishers have had to create unique content to attract premium ad rates. 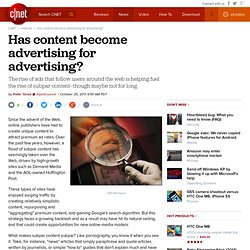 Over the past few years, however, a flood of subpar content has seemingly taken over the Web, driven by high-growth sites such as Demand Media and the AOL-owned Huffington Post. These types of sites have enjoyed surging traffic by creating relatively simplistic content, repurposing and "aggregating" premium content, and gaming Google's search algorithm. But this strategy faces a growing backlash and as a result may have hit its natural ceiling, and that could create opportunities for new online-media models. You Cheat. We Cut Prices. Surprise: To boost its circulation, Rupert Murdoch’s Wall Street Journal Europe engaged in massive channel stuffing. 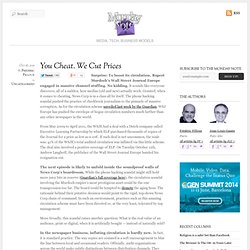 No kidding. It sounds like everyone discovers, all of a sudden, how medias (old and new) actually work. Granted, when it comes to cheating, News Corp is in a class all by itself. Getting Local: How Nonprofit News Ventures Seek Sustainability. Illustration - "Into the Wild" (PDF) -- (also: web-friendly JPEG version) By Mayur Patel and Michele McLellan In the emerging landscape of non-profit news, good journalism is not enough. 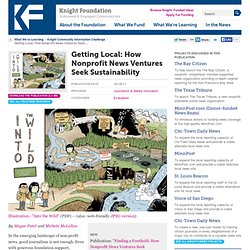 Even with generous foundation support, high-quality reporting alone will not create an organization that can sustain its ability to produce news in the public interest. Instead, successful news organizations – even the nonprofit ones - have to act like digital businesses, making revenue experimentation, entrepreneurship and community engagement important pieces of the mix. Navigating News Online. Whatever the future of journalism, much of it depends on understanding the ways that people navigate the digital news environment—the behavior of what might be called the new news consumer. 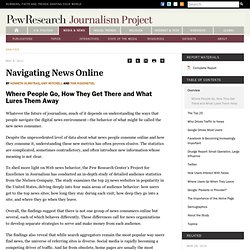 Despite the unprecedented level of data about what news people consume online and how they consume it, understanding these new metrics has often proven elusive. The statistics are complicated, sometimes contradictory, and often introduce new information whose meaning is not clear. To shed more light on Web news behavior, the Pew Research Center’s Project for Excellence in Journalism has conducted an in-depth study of detailed audience statistics from the Nielsen Company. The study examines the top 25 news websites in popularity in the United States, delving deeply into four main areas of audience behavior: how users get to the top news sites; how long they stay during each visit; how deep they go into a site; and where they go when they leave. Among the findings: The newsonomics of the next recession. Editor’s Note: Each week, Ken Doctor — author of Newsonomics and longtime watcher of the business side of digital news — writes about the economics of news for the Lab. 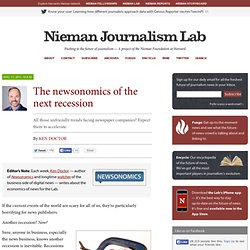 If the current events of the world are scary for all of us, they’re particularly horrifying for news publishers. Another recession? Now? Sure, anyone in business, especially the news business, knows another recession is inevitable. Recessions have always been with us and were, until the massive digitally driven downturn in the industry’s fortunes, the prime way we separated good years from mediocre ones.

Book Publishers. UK Book Publishers. Business Insider, over-aggregation, and the mad grab for traffic. By Ryan McCarthy The news that Business Insider raised approximately $7 million should be great news for those who follow the world of web media. Henry Blodget’s got a flat-out growth story on his hands: his staff of 60 now attracts 12 million visitors a month, according to their internal stats. But there’s reason to be concerned about what Blodget’s team has sacrificed along the way.

It’s worth noting that venture-backed media companies can very much be in a race against time for growth. Investors want a return on their money and, given the economics of web news, that almost always requires exponential growth in uniques and pageviews. Berkeley j-school hires Spot.Us founder to research online business models. Romenesko+ Misc. | DigiDaveDavid Cohn, who launched community-funded reporting site Spot.Us in 2008, will be conducting research on economic models of online journalism publications and help to develop business products for supporting hyperlocal news sites. He’ll be working with three community sites run by the UC Berkeley Graduate School of Journalism: MissionLocal.org, OaklandNorth.net and RichmondConfidential.org.

“These sites will be testing grounds for experimentation to aid in the research for building sustainable business models for small news websites,” says a press release. Cohn writes on his blog that he’ll “remain an active part of Spot.Us and in the coming weeks we should have some exciting news which will cement it as an ongoing business (elevated from a mere experiment) for at least another two years.”

Press release Cohn is the creator Spot.Us, a nonprofit website that launched in 2008 and pioneered community funded reporting. Should Ad Networks Pay Publishers For Stolen Content? The Fair Syndication Consortium Thinks So. As newspapers and other publishers watch their revenues diminish, one common refrain among them is that maybe they should somehow go after Google or Yahoo for aiding and abetting the destruction of their businesses and sometimes the wholesale theft of their content.

We’ve seen how the Associated Press wants to handle this: by aggressively going after anyone who even borrows a headline. Today, a consortium of other publishers including Reuters, the Magazine Publishers of America, and Politico are taking a more measured approach, but one which will no doubt still be controversial. They are forming the Fair Syndication Consortium, which is the brainchild of Attributor, the startup which tracks the reuse of text and images across the Web for many of these same publishers.

The newsonomics of ComboCo. Editor’s Note: Each week, Ken Doctor — author of Newsonomics and longtime watcher of the business side of digital news — writes about the economics of news for the Lab. Digital First: The Next Step « Digital First. Folks, Today marks another important step for Digital First. As announced earlier this morning, we have formed a new company – Digital First Media Inc. It will manage both the Journal Register Company and Media News Group and its mission will be to accelerate the transformation of both these great firms to a modern, multi-platform media company focused on local news.

And, let me tell you, it will be a powerhouse out of the gate with more than 880 products in 18 states serving more than 57 million Americans per month. More than 41 million of those customers are digital-only creating one of the largest online news networks in the country. Now Can We All Agree That The “High Quality Web Content” Experiment Has Failed? It’s hard to imagine anything more perfect than Slate’s decision to lay off its respected media critic Jack Shafer. New generation of Web analytics applies ‘big data’ to newsroom decisions. Innovation in turbulent times. News organizations have an innovation problem. Especially print media. As they gingerly wade into digital, their ability to foster innovation becomes more critical than ever. In today’s fast-changing landscape, they should view innovation as their main weapon against direct competitors and emerging players such as tech startups,.

Reflections of a Newsosaur. A shock video to keep news execs up at night. The 10 Most Buzzed About Brands at SXSW [STUDY] Apple’s Big Subscription Bet: Brilliant, Brazen, Or Batsh*t Crazy? We all knew it was coming, but the details of the App Store subscription model, which Apple outlined today, are fascinating on a number of levels. Apple Now The Most Valuable Tech Company By $100 Billion; Google Closing In On Microsoft. “It just feels inevitable”: Nick Denton on Gawker Media sites’ long-in-the-works new layout. Massive Influencers: Social Media 3.0. Travelocity makes website accessible to blind - Ecommerce. Online travel agency, Travelocity, has committed to make its website fully accessible to the blind. Exchange of Ideas — The Hub Magazine. Top 6 Private Sale Sites for the Best Travel Deals. Want To Edit Out All the Ads in Times Square? Foursquare to partner with Examiner.com.

Google’s Hal Varian to newspapers at FTC confab: “Experiment, ex. It's Too Early for Newspaper Publishers to "Burn the Boats"