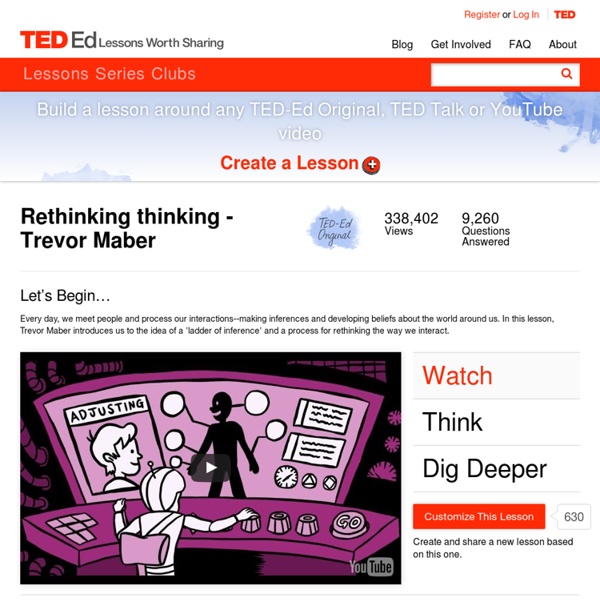 An excellent way to better understand the Ladder of Inference is to work in a small group and talk about a pattern of behavior that everyone can relate to. Some examples (in addition to the parking lot example) include: someone cutting in front of you in a line at the store; a friend or family member who is always annoyingly late; or someone who leaves you disappointed because he/she breaks more promises than he/she keeps. As you each share your experience, focus on what assumptions are at play, the conclusions you are each drawing from those assumptions, and what emotions you feel as a result. What are you seeing and learning as you hear how different everyone’s ladder can be?On one half of a sheet of paper, draw your own version of a ladder (make sure it has 7 rungs!) Related:  New Learning • think

Guanxi For the autonomous region, see Guangxi. Guanxi describes the basic dynamic in personalized networks of influence, and is a central idea in Chinese society. In Western media, the pinyin romanization of this Chinese word is becoming more widely used instead of the two common translations—"connections" and "relationships"—as neither of those terms sufficiently reflects the wide cultural implications that guanxi describes.[1] Guanxi has a major influence on the management of businesses based in China, and also those owned by overseas Chinese in Southeast Asia, known as the bamboo network.[2] Description and usage[edit] At its most basic, guanxi describes a personal connection between two people in which one is able to prevail upon another to perform a favor or service, or be prevailed upon. Guanxi refers to the benefits gained from social connections and usually extends from extended family, school friends, workmates and members of common clubs or organizations. Usage examples[edit]

Top 10 Presentation Tips The Iceberg Model The Iceberg Model One model that is helpful for understanding global issues is the iceberg model often used in systems thinking. We know that an iceberg has only 10 percent of its total mass above the water while 90 percent of it is underwater. But that 90 percent is what the ocean currents act on and what creates the icebergs behavior at its tip. If we look just below the water line, we often start to see patterns, or the recurrence of events. Like the different levels of an iceberg, deep beneath the patterns are the underlying structures or root causes that create or drive those patterns. Finally, at the very base of the iceberg are the assumptions and worldviews that have created or sustained the structures that are in place. An example of the iceberg model can be seen in our own health. From; Its All Connected: A Comprehensive Guide to Global Issues and Sustainable Solutions by Benjamin Wheeler, Gilda Wheeler and Wendy Church. www.facingthefuture.org

Brain Games | National Geographic Channel Finding Flow by Mihaly Csikszentmihalyi – Summary Being in a state of flow is when you’re fully immersed in a specific task with a seemingly inexhaustible amount of focus. Five hours may zip by and you hardly even notice. I’ve experienced flow on many occasions, such as when I get “in the zone” and program for 8 hours straight, or when I get consumed reading about a topic I find particularly interesting for a solid day. In an effort to read up more about flow—primarily the pros and cons, and how to achieve states of flow more often—I read Finding Flow by Mihály Csíkszentmihályi (apparently it’s pronounced “chicks-send-me-high”), who first proposed the whole idea. What follows in this post are my rough book notes. Chapter 1 – The Structures of Everyday Life Psychic energy: mental awareness/attention/focus; a limited resource. Work, maintenance, and leisure take up most of our psychic energy. Chapter 2 – The Content of Experience All emotions are essentially either positive/attractive or negative/repulsive. Work vs leisure vs maintenance tasks.

Hearing Is Our Least Trustworthy Sense by Orion Jones We like to think we perceive the world just as everyone else does. That's what makes communication possible, and without a baseline reality, how would science proceed? But our sense of hearing is remarkably unreliable, say sound psychologists. And since hearing is one out of just five senses we use to perceive the world, that's a little concerning. Or one out of seven if you count proprioception and vestibular sensation — and hey, why not? Just yesterday, for example, I missed a call from an unfamiliar number, and because I haven't set up my voicemail yet (who needs it?!) Ironically, our sense of hearing is unreliable because of its robust ability to create meaning from otherwise random sounds. Diana Deutsch, sound psychologist at UC San Diego, says that how we hear sounds depends on the tonality of our mother tongue, which varies greatly from country to country. Read more at BBC Future.