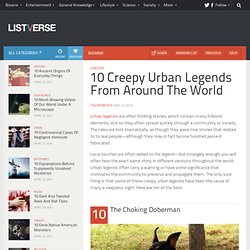 The tales are told dramatically, as though they were true stories that related to to real people—although they may in fact be one hundred percent fabricated. Local touches are often added to the legend—but strangely enough, you will often hear the exact same story in different versions throughout the world. Urban legends often carry a warning or have some significance that motivates the community to preserve and propagate them.

The only sure thing is that some of these creepy urban legends have been the cause of many a sleepless night. This urban legend comes from Sydney, Australia, and features a bizarre story regarding a choking Doberman dog. After dropping off the dog, she decides to go home and get her husband into bed. As they come down the stairs, several policemen run up to meet them. Zanfretta’s Alien Abduction Theodoros II. Urban Legends at Americanfolklore.net. Mothman. Mothman is the name of a cryptid speculated to exist after several reports of unidentified creatures seen in the Point Pleasant area of West Virginia from November 15, 1966, to December 15, 1967. 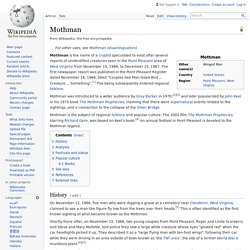 The first newspaper report was published in the Point Pleasant Register dated November 16, 1966, titled "Couples See Man-Sized Bird ... Creature ... Something".[1] The being subsequently entered regional folklore. Mothman was introduced to a wider audience by Gray Barker in 1970,[2][3] and later popularized by John Keel in his 1975 book The Mothman Prophecies, claiming that there were supernatural events related to the sightings, and a connection to the collapse of the Silver Bridge.

History[edit] On November 12, 1966, five men who were digging a grave at a cemetery near Clendenin, West Virginia, claimed to see a man-like figure fly low from the trees over their heads.[5] This is often identified as the first known sighting of what became known as the Mothman. Analysis[edit] Popular culture[edit] The Spider Bite. The Spider Bite or The Red Spot is a modern urban legend that emerged in Europe during the 1970s. 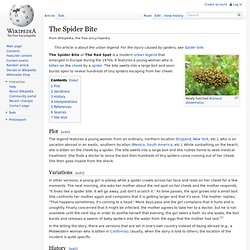 It features a young woman who is bitten on the cheek by a spider. The bite swells into a large boil and soon bursts open to reveal hundreds of tiny spiders escaping from her cheek. Plot[edit] The legend features a young woman from an ordinary, northern location (England, New York, etc.), who is on vacation abroad in an exotic, southern location (Mexico, South America, etc.). While sunbathing on the beach, she is bitten on the cheek by a spider. Variations[edit] In other versions, a young girl is asleep while a spider crawls across her face and rests on her cheek for a few moments. In the telling the story, there are versions that are set in one's own country instead of being abroad (e.g., a Midwestern woman who is bitten in California). Japanese urban legend. Japanese urban legends (都市伝説 Toshi Densetsu) are enduring modern folktales of paranormal creatures and their attacks on (usually) innocent victims or non-supernatural, widespread rumours in popular culture. 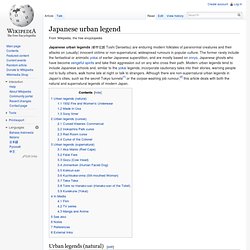 The former rarely include the fantastical or animistic yokai of earlier Japanese superstition, and are mostly based on onryo, Japanese ghosts who have become vengeful spirits and take their aggression out on any who cross their path. Modern urban legends tend to include Japanese schools and, similar to the yokai legends, incorporate cautionary tales into their stories, warning people not to bully others, walk home late at night or talk to strangers. Although there are non-supernatural urban legends in Japan's cities, such as the secret Tokyo tunnels[1] or the corpse-washing job rumour,[2] this article deals with both the natural and supernatural legends of modern Japan. Urban legends (natural)[edit] 1932 Fire and Women's Underwear[edit] Urban legend. An urban legend, urban myth, urban tale, or contemporary legend, is a form of modern folklore consisting of stories that may or may not have been believed by their tellers to be true.[1] As with all folklore and mythology, the designation suggests nothing about the story's veracity, but merely that it is in circulation, exhibits variation over time, and carries some significance that motivates the community in preserving and propagating it. 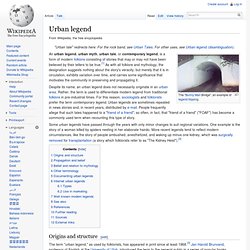 Despite its name, an urban legend does not necessarily originate in an urban area. Rather, the term is used to differentiate modern legend from traditional folklore in pre-industrial times. For this reason, sociologists and folklorists prefer the term contemporary legend. Urban legends are sometimes repeated in news stories and, in recent years, distributed by e-mail. Some urban legends have passed through the years with only minor changes to suit regional variations.

Origins and structure[edit] Propagation and belief[edit] Other terminology[edit]