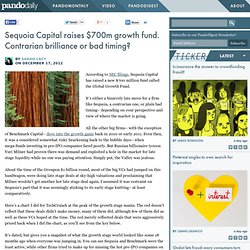 It’s either a bizarrely late move for a firm like Sequoia, a contrarian one, or plain bad timing– depending on your perspective and view of where the market is going. All the other big firms– with the exception of Benchmark Capital– dove into the growth game back in 2010 or early 2011. Even then, it was a considered somewhat risky hearkening back to the bubble days– when mega-funds investing in pre-IPO companies fared poorly. But Russian billionaire tycoon Yuri Milner had proven there was demand and exploited a hole in the market for late stage liquidity while no one was paying attention. 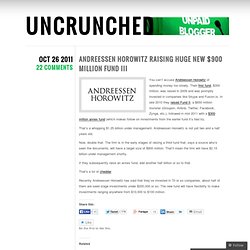 Their first fund, $300 million, was raised in 2009 and was promptly invested in companies like Skype and Fusion.io. In late 2010 they raised Fund II, a $650 million monster (Groupon, Airbnb, Twitter, Facebook, Zynga, etc.), followed in mid 2011 with a $300 million annex fund (which makes follow on investments from the earlier fund it’s tied to). That’s a whopping $1.25 billion under management. Andreessen Horowitz is not yet two and a half years old. Now, double that. If they subsequently raise an annex fund, add another half billion or so to that. That’s a lot of cheddar. Recently Andreessen Horowitz has said that they’ve invested in 70 or so companies, about half of them are seed stage investments under $200,000 or so.

Like this: Like Loading... How Russian Tycoon Yuri Milner Bought His Way Into Silicon Valley. In less than two years, Yuri Milner's fund has gone from zero equity to more than $12 billion in assets.Photo: Greg Girard This is my first trip to Moscow, and Yuri Milner, the world’s most successful investor in social media, is taking me to his parents’ apartment, which he bills as a typical middle-class Moscow dwelling.

It’s drab Soviet brick outside. The none-too-reliable-looking elevator is encircled by a crumbling staircase. But inside, the apartment is genteel and highly recognizable to me. It’s like many you would find on the Upper West Side of Manhattan, a cramped and comfortable set of rooms without a recent paint job, filled with too many tchotchkes and way too many books. The message seems clear: Milner may have invested in virtually every social media powerhouse, from Facebook to Twitter to Spotify. To many, Milner’s success is not just too much, too fast, but also somehow unfair. It certainly hasn’t played that way in the tight-knit club of Valley venture capitalists. Facebook Backer Accel Targets Mobile After Social-Media Spree. More than a decade after missing out on the most valuable Web companies of the 1990s, venture- capital firm Accel Partners is emerging as the leader in the new rapid-growth area of investing: social media. 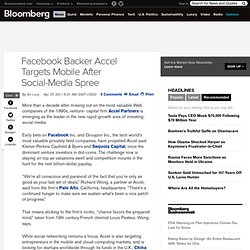 Early bets on Facebook Inc. and Groupon Inc., the tech world’s most valuable privately held companies, have propelled Accel past Kleiner Perkins Caufield & Byers and Sequoia Capital, once the dominant venture investors in dot-coms. The challenge now is staying on top as valuations swell and competition mounts in the hunt for the next billion-dollar payday. “We’re all conscious and paranoid of the fact that you’re only as good as your last set of deals,” Richard Wong, a partner at Accel, said from the firm’s Palo Alto, California, headquarters. “There’s a continued hunger to make sure we sustain what’s been a nice patch of progress.” That means sticking to the firm’s motto, “chance favors the prepared mind,” taken from 19th century French chemist Louis Pasteur, Wong says.