Andvaranaut. In Norse mythology, Andvaranaut (Andvari's Gift), first owned by Andvari, is a magical ring that can make gold. 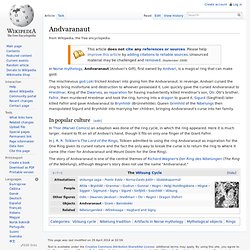 In J. R. R. Brísingamen. Heimdall returns Brisingamen to Freyja, in an anachronistic painting centuries after the era of the myth's popularity In Norse mythology, Brísingamen (or Brísinga men) is the torc or necklace of the goddess Freyja.[1] The name is an Old Norse compound brísinga-men whose second element is men "(ornamental) neck-ring (of precious metal), torc".[2] The etymology of the first element is uncertain. 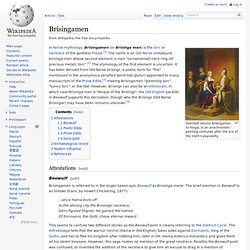 It has been derived from Old Norse brísingr, a poetic term for "fire" mentioned in the anonymous versified word-lists (þulur) appended to many manuscripts of the Prose Edda,[3] making Brísingamen "gleaming torc", "sunny torc", or the like. However, Brísingr can also be an ethnonym, in which case Brísinga men is "torque of the Brísings"; the Old English parallel in Beowulf supports this derivation, though who the Brísings (Old Norse Brísingar) may have been remains unknown.[4] Attestations[edit] Beowulf[edit] Brísingamen is referred to in the Anglo-Saxon epic Beowulf as Brosinga mene. 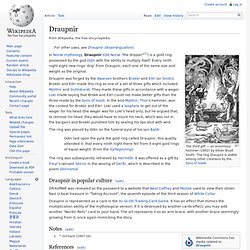 The ring Draupnir is visible among other creations by the Sons of Ivaldi. In Norse mythology, Draupnir (Old Norse "the dripper"[1]) is a gold ring possessed by the god Odin with the ability to multiply itself: Every ninth night eight new rings 'drip' from Draupnir, each one of the same size and weight as the original. The ring was placed by Odin on the funeral pyre of his son Baldr: Odin laid upon the pyre the gold ring called Draupnir; this quality attended it: that every ninth night there fell from it eight gold rings of equal weight. Necklace of a Lady of the Lake.

Ring of Gyges. The legend[edit] Gyges of Lydia was a historical king, the founder of the Mermnad dynasty of Lydian kings. 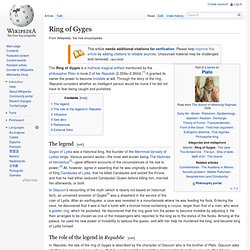 Various ancient works—the most well-known being The Histories of Herodotus[2]—gave different accounts of the circumstances of his rise to power.[3] All, however, agree in asserting that he was originally a subordinate of King Candaules of Lydia, that he killed Candaules and seized the throne, and that he had either seduced Candaules' Queen before killing him, married her afterwards, or both. In Glaucon's recounting of the myth (which is clearly not based on historical fact), an unnamed ancestor of Gyges[4] was a shepherd in the service of the ruler of Lydia. After an earthquake, a cave was revealed in a mountainside where he was feeding his flock. Entering the cave, he discovered that it was in fact a tomb with a bronze horse containing a corpse, larger than that of a man, who wore a golden ring, which he pocketed. 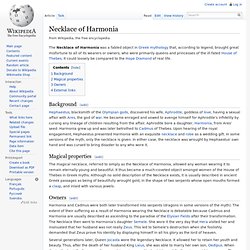 It thus became a much-coveted object amongst women of the House of Thebes in Greek myths. Although no solid description of the Necklace exists, it is usually described in ancient Greek passages as being of beautifully wrought gold, in the shape of two serpents whose open mouths formed a clasp, and inlaid with various jewels. Owners[edit] Harmonia and Cadmus were both later transformed into serpents (dragons in some versions of the myth). The tyrant Phayllus, one of the Phocian leaders in the Third Sacred War (356 BC-346 BC), then stole it from the Temple and gave it to his mistress. 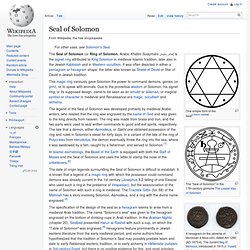 The current flag of Morocco, introduced in 1915 (r. Yusef) displays a green pentagram in reference to Solomon. The Seal of Solomon (or Ring of Solomon, Arabic Khātim Sulaymāni خاتم_سليمان) is the signet ring attributed to King Solomon in medieval Islamic tradition, later also in the Jewish Kabbalah and in Western occultism. Svíagris.