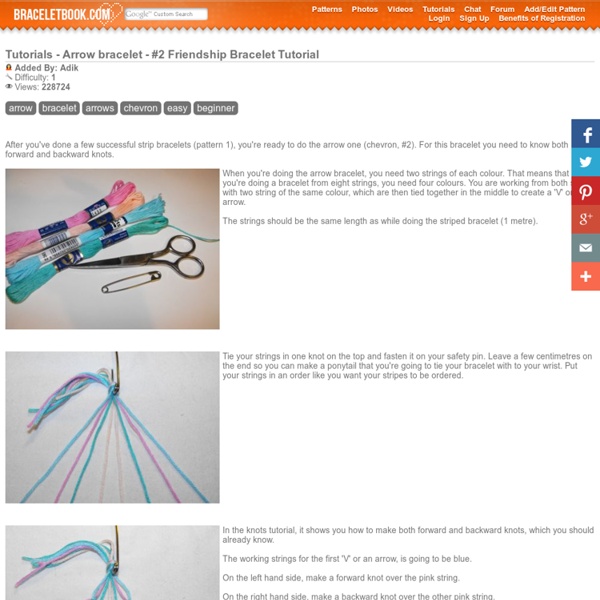 After you've done a few successful strip bracelets (pattern 1), you're ready to do the arrow one (chevron, #2). For this bracelet you need to know both forward and backward knots. When you're doing the arrow bracelet, you need two strings of each colour. That means that when you're doing a bracelet from eight strings, you need four colours. You are working from both sides with two string of the same colour, which are then tied together in the middle to create a 'V' or an arrow. The strings should be the same length as while doing the striped bracelet (1 metre). Tie your strings in one knot on the top and fasten it on your safety pin. In the knots tutorial, it shows you how to make both forward and backward knots, which you should already know. The working strings for the first 'V' or an arrow, is going to be blue. On the left hand side, make a forward knot over the pink string. On the right hand side, make a backward knot over the other pink string. You made your first 'V' or an arrow.

Friendship Bracelets Macraméd friendship bracelets were all the rage when I was growing up in the eighties. All the girls at my school would obsessively make them for one another in a dizzying variety of colors, widths, and patterns. It's amazing, thinking back, that such young girls could make such beautifully intricate accessories. I, of course, tried my hand at making them as well. Fast forward 20 years: Purl Soho started carrying DMC Cotton Embroidery Floss in every conceivable color (including fluorescents! Making friendship bracelets is a surprisingly easy craft, and best of all, in the end you'll have a bunch of cute summer bracelets to give to your pals. Materials Since this is such a free form enterprise the amount of colors of DMC embroidery floss you get is really up to you. Please not that the fluorescent thread is slightly thicker than the regular DMC floss. Beginning To begin, pick out your colors. For patterns use a doubled length of thread cut each color to a length of 72-inches. The Left Knot

Gift Ideas for Poor Creative Souls (13) Posted by: Cathy on Jun 11, 2012 Tagged in: Untagged Painting stones has to be one of the cheapest forms of art and a wonderful way to give someone an inexpensive but thoughtful gift. I have collated a great selection here which I hope you will like and will feel inspired by. Painted stones also make great paper weights or you could use them as place settings for a wedding party. All you need to do is collect a few pebbles, get out your acrylic paints and then varnish your stones to protect them. Have fun! For tutorials on how to market yourself online, please go here

{Valentines day} pixel-y popup card I‘ve been scratching my head trying to come up with a card for my hubby {AKA the non-romantic type}. I finally decided to make this pixely popup heart card! They are really minimal (which I love) and take about 20 minutes to make (that includes the card, insert and envelope). You can even make some pixely confetti to put inside the card (if you are a big kid like me!). Full instructions and printable templates below! (BTW I remember seeing something similar in a popup book years ago. How to 1. (If you have a cutting machine then see note at end of post!) Cut along the black lines and score the grey lines. 3. 5. 7. Edited to add: The lovely Kayla from saynotsweetanne has send me a .dfx file of the card which you can use if you have a cutting machine.

How to Make Paper Pencils (tutorial) I have always wanted to make my own pencils, but the thought of shaping two pieces of wood to allow a piece of lead to sit perfectly inside made me think it wasn’t worth the effort. For some reason I was looking at some pieces of lead I have (for a drafting pencil) and “pop” there it was.. a solution to my DIY longing. Here is a tutorial to make pencils that is so ridiculously easy I’ve made 10 pencils since the idea came to me yesterday! Enjoy. Paper: I recommend using 6″ origami paper. Here’s a video I made so you can watch me make it from start to finish! I have to admit I really enjoyed doing this craft. Hope you’re just as excited about this as I am! leads {here} paper {here} mod podge {here} {If you like pencils, you may also like my toadstool pencil craft!} Share 16K+ Kimanh Hi my name's Kimanh.

DIY Découpage Floral Bag - Honestly WTF When H&M asked us to DIY a boho-inspired item for their summer issue, découpage was the first thing that came to mind. Honestly, does it get any better than customizing a simple handbag with a brilliant floral print? However you create it, it’ll be satisfying to know that you’ve designed yourself a one of a kind bag! You’ll need:a handbagcotton fabric with a large floral patternpainter’s tapeMod Podgecraft paint2 small plastic dishes2 brushesscissors Start by taping off the edges and hardware of the handbag. Squeeze a dollop of colored craft paint into a small disposable container. Allow the first layer to dry completely. While the paint dries, carefully cut out a handful of flowers from the fabric. Arrange them onto the painted section of the bag. Remove the painter’s tape when the Mod Podge has dried clear and your floral handbag is complete! (all images by HonestlyWTF)

TetraBox Light by Ed Chew & Yanko Design Liquid to Light Designer Ed Chew takes a green step in the right direction with the TetraBox lamp, a light object made from discarded drink packets that would have otherwise ended up in landfills already packed to the brim. The design is achieved by unfolding the packets and refolding them into hexagonal and pentagonal sections that are then pieced together to form a geodesic sphere or any other desired shape. Here, the Epcot-like ball makes an attractive overhead light and casts an impressive web of shadows and shapes on the surrounding space. Designer: Ed Chew