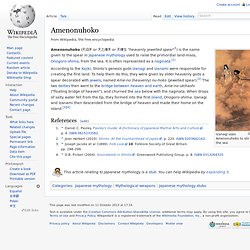 Is the name given to the spear in Japanese mythology used to raise the primordial land-mass, Onogoro-shima, from the sea. It is often represented as a naginata.[1] According to the Kojiki, Shinto's genesis gods Izanagi and Izanami were responsible for creating the first land. To help them do this, they were given by older heavenly gods a spear decorated with jewels, named Ame-no (heavenly) nu-hoko (jewelled spear).[2] The two deities then went to the bridge between heaven and earth, Ame-no-ukihashi ("floating bridge of heaven"), and churned the sea below with the naginata. Ascalon. Rod of Asclepius. Rod of Asclepius In Greek mythology, the Rod of Asclepius (⚕;[1] sometimes also spelled Asklepios or Aesculapius), also known as the asklepian,[2] is a serpent-entwined rod wielded by the Greek god Asclepius, a deity associated with healing and medicine. 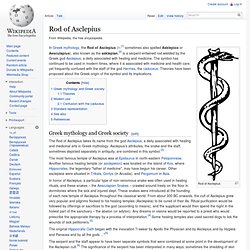 The symbol has continued to be used in modern times, where it is associated with medicine and health care, yet frequently confused with the staff of the god Hermes, the caduceus. Theories have been proposed about the Greek origin of the symbol and its implications. Greek mythology and Greek society[edit] Dagda's Staff. Gáe Buide (“Yellow Shaft”) Caduceus. Modern depiction of the caduceus as the symbol of commerce Hermes Ingenui[1] carrying a winged kerykeion upright in his left hand, Roman copy reflecting an unknown Greek original of the 5th century BCE. 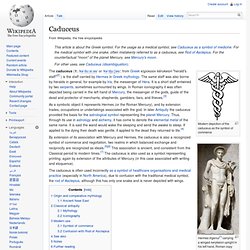 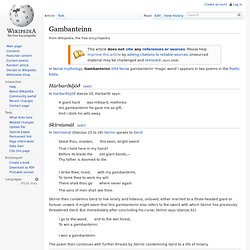 Hárbarðsljóð[edit] In Hárbarðsljóð stanza 20, Hárbarðr says: A giant hard was Hlébard, methinks: His gambanteinn he gave me as gift, And I stole his wits away. Skírnismál[edit] In Skírnismál (Stanzas 25 to 26) Skírnir speaks to Gerd: Seest thou, maiden, this keen, bright swordThat I hold here in my hand? Skírnir then condemns Gerd to live lonely and hideous, unloved, either married to a three-headed giant or forever unwed. I go to the wood, and to the wet forest, To win a gambanteinn; . . . . . . . . .

The poem then continues with further threats by Skírnir condemning Gerd to a life of misery. Gríðr. In Norse mythology, Gríðr (Old Norse "greed"[1] or "greed, vehemence, violence, impetuosity"[2]) is a female jötunn who, aware of Loki's plans to have Thor killed at the hands of the giant Geirröd, helped Thor by supplying him with a number of magical gifts which included a pair of iron gloves, and a staff known as Gríðarvölr. 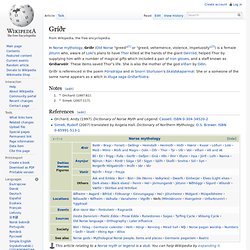 These items saved Thor's life. She is also the mother of the god Víðarr by Odin. Gríðr is referenced in the poem Þórsdrápa and in Snorri Sturluson's Skáldskaparmál. She or a someone of the same name appears as a witch in Illuga saga Gríðarfóstra. Notes[edit] Gungnir. Hades' Pitchfork, the Bident. Holy Lance. The Holy Lance (German: Heilige Lanze), also known as the Holy Spear, Spear of Destiny, Lance of Longinus, and Spear of Longinus, is the name given to the lance that pierced the side of Jesus as he hung on the cross, according to the Gospel of John. 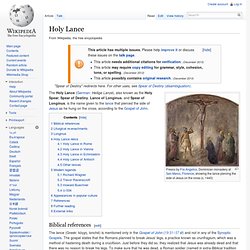 Biblical references[edit] The lance (Greek: λόγχη, lonchē) is mentioned only in the Gospel of John (19:31–37) and not in any of the Synoptic Gospels. The gospel states that the Romans planned to break Jesus' legs, a practice known as crurifragium, which was a method of hastening death during a crucifixion. Just before they did so, they realized that Jesus was already dead and that there was no reason to break his legs. To make sure that he was dead, a Roman soldier (named in extra-Biblical tradition as Longinus) stabbed him in the side. One of the soldiers pierced his side with a lance (λόγχη), and immediately there came out blood and water. Liturgical re-enactments[edit] Kongō. Lance of Olyndicus. Lúin of Celtchar. Properties[edit] 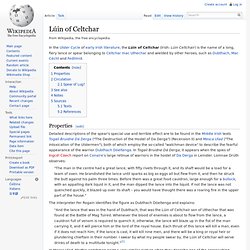 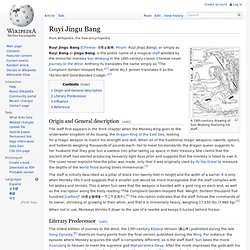 Origin and General description[edit] The staff is initially described as a pillar of black iron twenty feet in height and the width of a barrel. It is only when Monkey lifts it and suggests that a smaller size would be more manageable that the staff complies with his wishes and shrinks. Sha Wujing's Yuèyáchǎn.

The Spear of Achilles. Spears of the Valkyrie. Thyrsus. Symbolism[edit] The thyrsus, associated with Dionysus (or Bacchus) and his followers, the Satyrs and Maenads, is a symbol of prosperity, fertility, hedonism, and pleasure/enjoyment in general.[1] It has been suggested that this was specifically a fertility phallus, with the fennel representing the shaft of the penis and the pine cone representing the "seed" issuing forth. 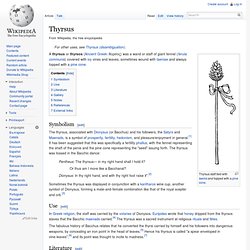 The thyrsus was tossed in the Bacchic dance: Pentheus: The thyrsus— in my right hand shall I hold it? Or thus am I more like a Bacchanal? Dionysus: In thy right hand, and with thy right foot raise it".[2] Tonbogiri. Trishula. The trishula (Sanskrit: त्रिशूल triśūla, Malay: trisula, Telugu: trishulamu, Tamil: thirisulam, Malayalam: തൃശൂലം trisoolam, Thai: trisoon or tri) is a type of South Asian trident also found in Southeast Asia. 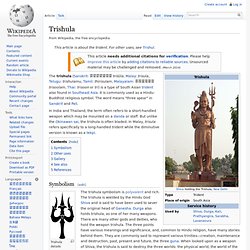 It is commonly used as a Hindu-Buddhist religious symbol. The word means "three spear" in Sanskrit and Pali.