Nations in the Middle-East

Qatar. Israel. Lebanon. The Palestinians. Iran. Kuwait. Making the Arab League Matter. Few international institutions have been more congenitally irrelevant than the League of Arab States. It's problems are structural: a Charter rooted in the protection of state sovereignty, an autocratic and inept membership, a façade of Arab unity hardly concealing the reality of deep political divisions.

The Arab League for long decades has been little more than a punchline for sad jokes about the failed hopes of unified or effective Arab action. Some believe that this began to change over the last year. Certainly, it was startling to see the Arab League suddenly acting on regional security issues. Its rapid, unified response to Muammar al-Qaddafi's brutal crackdown in Libya, likely tipped the balance at the United Nations in favor of NATO's military intervention.

But this burst of activity was misleading. But this could change. Migration: The Arabian Gulf story. When I arrived in the Gulf fourteen years ago, my perception of this region was the same as that of millions of other migrants, that this is a place where we can easily earn enough to achieve financial freedom. 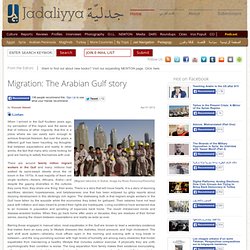 But over the years, a different gulf has been haunting my thoughts: that between expectations and reality. In other words, the fact that many who come looking for gold are having to satisfy themselves with coal. There are around twenty million migrant workers in the Gulf and many millions had walked its sand-swept streets since the oil boom in the 1970s. A vast majority of them are single workers—Asians, Africans, Arabs—and despite the gaping diversities in the cultures they come from, they share one thing: their woes. Theirs is a story that will move hearts. Barring those engaged in manual labor, most expatriates in the Gulf are known to lead a sedentary existence that makes them an easy prey to lifestyle diseases like diabetes, blood pressure, and high cholesterol.

We are Not One. The Out of Towner The structure of the Arab League comes from an artificial belief that Arab States are identical, and the decision making process takes an inherited value that Arab States will always advocate the same agenda and serve the same interests.This is false. 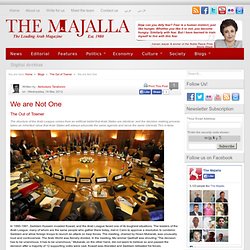 In 1990-1991, Saddam Hussein invaded Kuwait, and the Arab League faced one of its toughest situations. The leaders of the Arab League, many of whom are the same people who gather there today, met in Cairo to approve a resolution to condemn Saddam and allow foreign troops to launch an attack on Iraqi forces. The meeting, chaired by Hosni Mubarak, was unusually loud and controversial. Tribalism in the Arabian Peninsula: It's A Family Affair. Across the Arabian Peninsula and stretching well into North Africa and Sudan, there is a common bond, perhaps only behind religion and language in importance, that binds Arabic language speakers together. 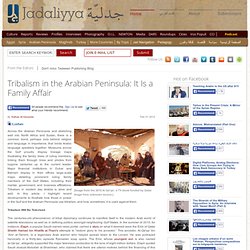 Museums across the Gulf proudly display lineage maps illustrating the family trees of ruling members, linking them through lines and photos from bygone centuries up to the current leader. Major financial institutions in Dubai and Bahrain display in their offices large-scale maps detailing prominent ruling family members of the Gulf States, including their marital, government, and business affiliations. Tribalism in modern day Arabia is alive and well. In this article, I highlight recent developments to illustrate how those in power in the Gulf and the Arabian Peninsula use tribalism, and how, sometimes, it is used against them.

Tribalism Will Be Televised There were other instances when tribal politics found its way onto the small screen. The 'Anaza Connection UAE: Tribalism Squared. A Democratic Exception. Egypt Unwrapped In the first ever Cairo launch of its World Report, Human Rights Watch chief slams Arab autocrats and the Western democracies who support them. 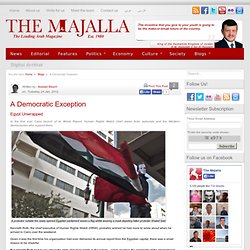 A protestor outside the newly opened Egyptian parliament waves a flag whilst wearing a mask depicting fallen protester Khaled Said Kenneth Roth, the chief executive of Human Rights Watch (HRW), probably wished he had more to smile about when he arrived in Cairo over the weekend. Given it was the first time his organization had ever delivered its annual report from the Egyptian capital, there was a small reason to be cheerful. But what Mr Roth had to say about the state of human rights in the region – not to mention the complicity of the international community in its dealings with the Arab countries – made for rather sombre contemplation. In the Middle East, he said, The West seemed content to tolerate autocrats “so long as they in turn supported Western interests”.