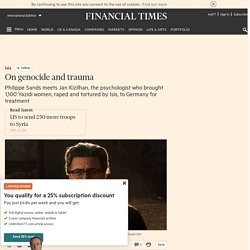 The banner headline in Bild, Germany’s biggest-selling newspaper, appeared on August 15 2014, a few days after Isis took control of the ancient town of Sinjar in northern Iraq. The article beneath it described terrible atrocities — beheadings, enslavement, torture — carried out by Isis militants on members of the Yazidi community in Sinjar and the surrounding villages. Women and girls were being subjected to a systematic programme of rape, some of them as young as eight. The article was a plea for action, and it worked. 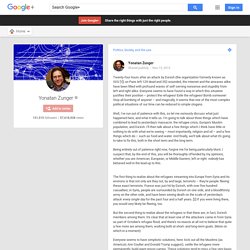 Everyone seems to have found a way in which this situation justifies their position – protect the refugees! Exile the refugees! Bomb someone! Stop all bombing of anyone! What I Discovered From Interviewing Imprisoned ISIS Fighters. No sooner am I settled in an interviewing room in the police station of Kirkuk, Iraq, than the first prisoner I am there to see is brought in, flanked by two policemen and in handcuffs. 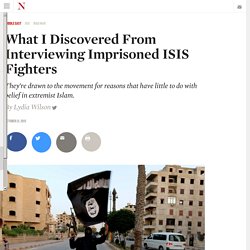 I awkwardly rise, unsure of the etiquette involved in interviewing an ISIS fighter who is facing the death penalty. He is small, much smaller than I, on first appearances just a boy in trouble with the police, his eyes fixed on the floor, his face a mask. We all sit on armchairs lined up against facing walls, in a room cloudy with cigarette smoke and lit by fluorescent strip lighting, a room so small that my knees almost touch the prisoner’s—but he still doesn’t look up. I have interviewed plenty of soldiers on the other side of this fight, mostly from the Kurdish forces (known as pesh merga) but also fighters in the Iraqi army (known as the Iraqi Security Forces or ISF), both Arab and Kurdish. 7 Things I Learned Reading Every Issue Of ISIS's Magazine. #3. 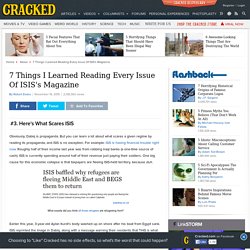 Here's What Scares ISIS Obviously, Dabiq is propaganda. But you can learn a lot about what scares a given regime by reading its propaganda, and ISIS is no exception. For example: ISIS is having financial trouble right now. Roughly half of their income last year was from robbing Iraqi banks (a one-time source of cash). Express.co.ukWhat exactly did you think all those refugees are refugeeing from?

Earlier this year, 3-year-old Aylan Kurdi's body washed up on shore after his boat from Egypt sank. There was more clear evidence of this in the third issue of Dabiq, which concluded an article full of advice for people looking to join the Islamic State with these warnings: How to Counter Rape During War. From Muhammad to ISIS: Iraq's Full Story. If you’re not sure what Odd Things in Odd Places is and why I’m in Iraq by myself, here’s why. 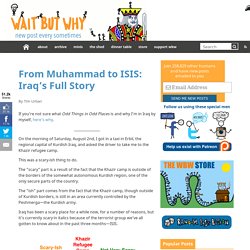 On the morning of Saturday, August 2nd, I got in a taxi in Erbil, the regional capital of Kurdish Iraq, and asked the driver to take me to the Khazir refugee camp. Trying to follow what is going on in Syria and why? This comic will get you there in 5 minutes. That warning has become a global alert.

Since the uprising against Assad in March 2011, over 240,000 people have been killed, 4 million Syrians have fled their country, and over 7 million have been displaced. The headlines are full of the heartbreaking stories of these refugees — including young children — who have died trying to reach safety in other countries. The story of these refugees is deeply tied to the effects of climate change. "We are experiencing a surprising uptick in global insecurity ... partially due to our inability to manage climate stress. " That's how Columbia University professor Marc Levy (who also does studies for the U.S. government) summed it up. We are lifelong Zionists. Here’s why we’ve chosen to boycott Israel. Steven Levitsky is a professor of government at Harvard University. 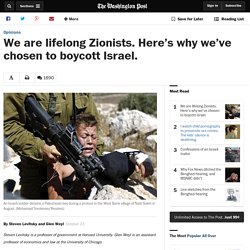 Glen Weyl is an assistant professor of economics and law at the University of Chicago. We are lifelong Zionists. Like other progressive Jews, our support for Israel has been founded on two convictions: first, that a state was necessary to protect our people from future disaster; and second, that any Jewish state would be democratic, embracing the values of universal human rights that many took as a lesson of the Holocaust. Undemocratic measures undertaken in pursuit of Israel’s survival, such as the occupation of the West Bank and Gaza and the denial of basic rights to Palestinians living there, were understood to be temporary.

But we must face reality: The occupation has become permanent. This “basic fact” poses an ethical dilemma for American Jews: Can we continue to embrace a state that permanently denies basic rights to another people? Finally, occupation threatens the security it was meant to ensure. Syria: the story of a revolution - video.