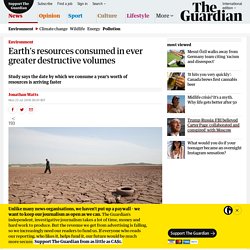 As a result, the Earth Overshoot Day – which marks the point at which consumption exceeds the capacity of nature to regenerate – has moved forward two days to 1 August, the earliest date ever recorded. To maintain our current appetite for resources, we would need the equivalent of 1.7 Earths, according to Global Footprint Network, an international research organisation that makes an annual assessment of how far humankind is falling into ecological debt. The overshoot began in the 1970s, when rising populations and increasing average demands pushed consumption beyond a sustainable level.

Since then, the day at which humanity has busted its annual planetary budget has moved forward. Thirty years ago, the overshoot was on 15 October. The situation is reversible. Mock review sheets for latest Y11 mock exams to allow independent response towards improving results. #GeographyTeacher… AQA GCSE The Challenge of Resource Management. How #Canada got cool. Indigenous people are left poor as tech world takes lithium from under their feet - Washington Post. *Technosphere (anthropocene): A planet's worth of human-made things has been weighed.

A new report has calculated the total mass of all the technology humans have produced, everything from buildings to cars and computers, and found it is an astounding 30 trillion tons. 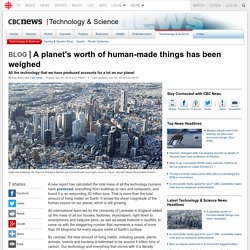 That is more than the total amount of living matter on Earth. It shows the sheer magnitude of the human impact on our planet, which is still growing. An international team led by the University of Leicester in England added up the mass of all our houses, factories, skyscrapers, right down to smartphones and ballpoint pens, as well as waste material in landfills, to come up with the staggering number that represents a mass of more than 50 kilograms for every square metre of Earth's surface. By contrast, the total amount of living matter, including people, plants, animals, insects and bacteria is estimated to be around 4 trillion tons of carbon. Our technology and everything that comes with it is literally larger than life. All those electronics we use adds to the waste we produce. *Various graphs: Australia’s export performance in 2015.

27 May 2016 Mark ThirlwellAustralian EconomyInternational Trade The recent release of supplementary data on international trade in services by the Australian Bureau of Statistics (ABS) has allowed DFAT to update its rankings of Australia’s leading trading partners and top 25 exports and imports. 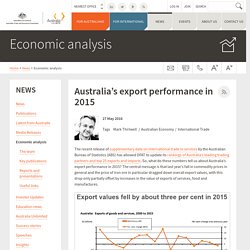 So, what do these numbers tell us about Australia’s export performance in 2015? The central message is that last year’s fall in commodity prices in general and the price of iron ore in particular dragged down overall export values, with this drop only partially offset by increases in the value of exports of services, food and manufactures. The main feature of the headline numbers was a decline in the overall value of exports. Exports of resources (minerals and fuels) continue to dominate Australia’s export basket, but their share has declined from almost 50 per cent in 2014 to closer to 40 per cent last year. 1 Comprising exports of both unprocessed and processed food. These 5 technologies are transforming the way we consume everyday products. Take a look around you. 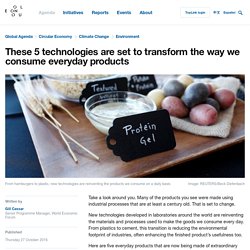 Many of the products you see were made using industrial processes that are at least a century old. That is set to change. New technologies developed in laboratories around the world are reinventing the materials and processes used to make the goods we consume every day. From plastics to cement, this transition is reducing the environmental footprint of industries, often enhancing the finished product’s usefulness too. Here are five everyday products that are now being made of extraordinary things: Compostable Plastics Plastic is the world’s most versatile material.

Bioplastics are the result of many years of research into more environmentally friendly yet functional plastic alternatives.