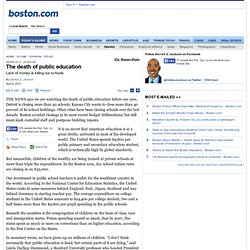 Detroit is closing more than 40 schools, Kansas City wants to close more than 40 percent of its school buildings. Other cities have been closing schools over the last decade. Boston avoided closings in its most recent budget deliberations, but still must slash custodial staff and postpone building repairs. It is no secret that American education is at a great divide, unrivaled in most of the developed world. The United States spends $9,800 per public primary and secondary education student, which is technically high by global standards.

Chomsky: Public Edu Under Massive Corporate Assault — What's Next? August 5, 2011 | Like this article? 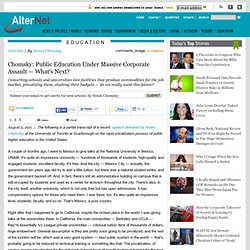 Join our email list: Stay up to date with the latest headlines via email.

Who owns what ? charter schools funding

How the Billionaire boys Club is running - and ruining - education. First, let's set the scene, or if you will, the justification used for the actions advocated by the "reformers" funded by the Billionaire Boys Club. 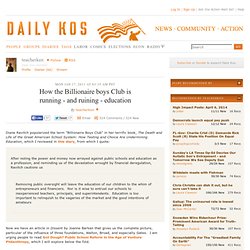 At least since a Nation at Risk in 1983, the American people have been hammered with the theme that our students are falling behind in international competitions. We heard that again with the release by OECD of the most recent PISA scores. But we should remember the caution of Mark Twain he attributed in part to Disraeli, "There are three kinds of lies: lies, damned lies and statistics. " Perhaps if we follow the logic of No Child Left Behind and insist upon a disaggregation of the scores on international tests we can see that the figures tell a story quite different than that pushed by the organizations backed by the Billionaire Boys Club. students in U.S. schools where the poverty rate was less than 10 percent ranked first in reading, first in science, and third in math. Barkan seeks to explore 3 questions: ... Teacher Anger - and more, State school. General characteristics[edit] State education includes basic education, kindergarten to twelfth grade, also referred to as primary and secondary education, as well as post-secondary educational institutions such as universities, colleges, and technical schools funded and overseen by government rather than private entities. 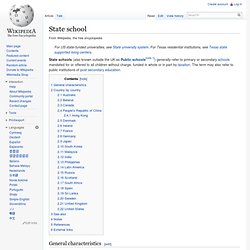 State education is inclusive, both in its treatment of students and in that enfranchisement for the government of public education is as broad as for government generally. It is often organized and operated to be a deliberate model of the civil community in which it functions. Private school. Private schools, also known as independent schools or nonstate schools,[1] are not administered by local, state or national governments; thus, they retain the right to select their students and are funded in whole or in part by charging their students tuition, rather than relying on mandatory taxation through public (government) funding; at some private schools students may be able to get a scholarship, which makes the cost cheaper, depending on a talent the student may have e.g. sport scholarship, art scholarship, academic scholarship etc. 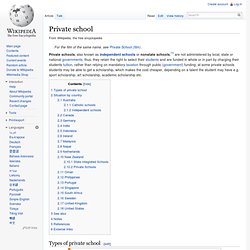 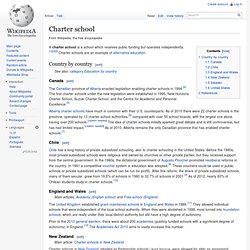 Trailer & Official Movie Site. Waiting for "Superman": The Book. The American public school system is in crisis, failing millions of students, producing as many drop-outs as graduates, and threatening our economic future. 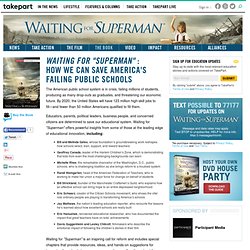 By 2020, the United States will have 123 million high-skill jobs to fill—and fewer than 50 million Americans qualified to fill them. Educators, parents, political leaders, business people, and concerned citizens are determined to save our educational system. Waiting for "Superman" offers powerful insights from some of those at the leading edge of educational innovation, including: Waiting for "Superman" is an inspiring call for reform and includes special chapters that provide resources, ideas, and hands-on suggestions for improving the schools in your own community as well as throughout the nation. The Inconvenient Truth Behind Waiting for Superman. The Myth of Charter Schools by Diane Ravitch. Waiting for “Superman” a film directed by Davis Guggenheim Ordinarily, documentaries about education attract little attention, and seldom, if ever, reach neighborhood movie theaters. 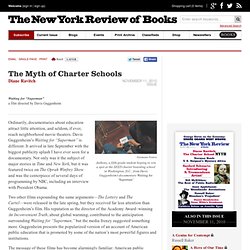 Davis Guggenheim’s Waiting for “Superman” is different. Millions paid for recycling tests. BY TODD FARLEY as published in the DETROIT FREE PRESS “While most of my colleagues opted not to dine on goat that evening, they nonetheless reveled in wine or cocktails and big, delicious steaks. 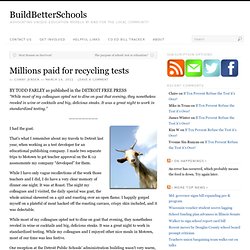 It was a great night to work in standardized testing.” I had the goat. That’s what I remember about my travels to Detroit last year, when working as a test developer for an educational publishing company. I made two separate trips to Motown to get teacher approval on the K-12 assessments my company “developed” for them. While I have only vague recollections of the work those teachers and I did, I do have a very clear memory of dinner one night. While most of my colleagues opted not to dine on goat that evening, they nonetheless reveled in wine or cocktails and big, delicious steaks. “Who are all you people anyways?” It all just gives me pause.

(pdf)CREDO study, Multiple Choice: Charter School Performance in 16 States. Same Kids, Same Building, Same Lies. One of the highlights of the TFA 20th anniversary summit was certainly when Secretary of Education Arne Duncan made a rousing speech at the closing ceremony. 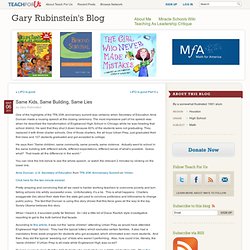 The most impressive part of his speech was when he described the transformation of Englewood High School in Chicago while he was heading that school district. He said that they shut it down because 60% of the students were not graduating. They replaced it with three charter schools. One of those charters, the all boys Urban Prep, just graduated their first class and 107 students graduated and got accepted to college. He says then “Same children, same community, same poverty, same violence. You can click the link below to see the whole speech, or watch the relevant 2 minutes by clicking on the lower link. Arne Duncan, U.S. Click here for the two minute excerpt Pretty amazing and convincing that all we need is harder working teachers to overcome poverty and turn failing schools into wildly successful ones.

The Real Roots of the Crisis - Umair Haque. By Umair Haque | 4:23 PM February 24, 2010 Remember Superman’s slogan? Let me remind you. The Equity Project. The Equity Project (TEP) is a New York charter school opened in September 2009. The school will instruct students in fifth through eighth grades and will pay its teachers a starting salary of $125,000 per year, more than double the national average. Teachers must also work double the hours a typical teacher works.[1] Background[2][edit] TEP was created by Zeke Vanderhoek, a Yale graduate and former middle school teacher with Teach For America. TEP Charter - The Equity Project Charter School. Preview: The $125,000 question - 60 Minutes. If profit-making schools are the answer, what's the question? Reports from Conservative "modernisers" are rolling off the presses, telling Michael Gove that the only way forward for schools is now the introduction of the profit motive.

Two reports from Policy Exchange thinktank led commentators to suggest the education secretary was "under pressure" to introduce such a policy by an organisation he had actually helped set up himself. ‪Bartleby Project 2011: Do not take your state tests!‬‏