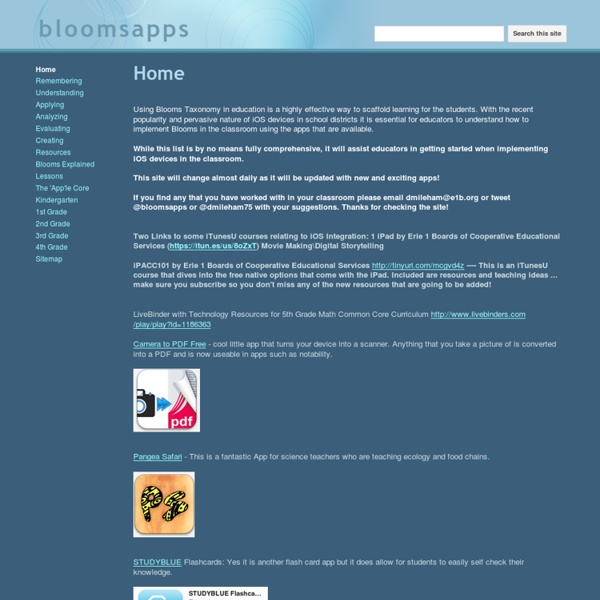 Using Blooms Taxonomy in education is a highly effective way to scaffold learning for the students. With the recent popularity and pervasive nature of iOS devices in school districts it is essential for educators to understand how to implement Blooms in the classroom using the apps that are available. While this list is by no means fully comprehensive, it will assist educators in getting started when implementing iOS devices in the classroom. This site will change almost daily as it will be updated with new and exciting apps! If you find any that you have worked with in your classroom please email dmileham@e1b.org or tweet @bloomsapps or @dmileham75 with your suggestions. Thanks for checking the site! Two Links to some iTunesU courses relating to iOS Integration: 1 iPad by Erie 1 Boards of Cooperative Educational Services ( Movie Making\Digital Storytelling Camera to PDF Free - cool little app that turns your device into a scanner. LiveBinders: I would be remiss if I didn't post this.

- Best iPad App Developers 0 Comments December 19, 2011 By: Vicki Windman Dec 18 Written by: 12/18/2011 5:09 PM ShareThis As the search for the best education apps continues, certain developers are working diligently to expand from a single app to an entire line of apps. Bloomin' Apps This page gathers all of the Bloomin' Apps projects in one place.Each image has clickable hotspots and includes suggestions for iPad, Android, Google and online tools and applications to support each of the levels of Bloom's Revised Taxonomy.I have created a page to allow you to share your favorite online tool, iOS, or Android app with others. Cogs of the Cognitive Processes I began to think about the triangular shape of Bloom's Taxonomy and realized I thought of it a bit differently.Since the cognitive processes are meant to be used when necessary, and any learner goes in and out of the each level as they acquire new content and turn it into knowledge, I created a different type of image that showcased my thoughts about Bloom's more meaningfully.Here is my visual which showcases the interlocking nature of the cognitive processes or, simply, the "Cogs of the Cognitive Processes". IPAD APPS TO SUPPORT BLOOM'S REVISED TAXONOMYassembled by Kathy Schrock​ Bloom's and SAMR: My thoughts

iPhone & iPad Live 276: Apple education event, iBooks 2, and iTunes U Rene, Leanna, and Seth bring you live color, commentary, and analysis of Apple's New York education event, including iBooks 2, Textbooks, iBooks Author, and iTunes U. What does it mean for schools, for Apple, and for the future? This is iPhone & iPad Live! (Note: Show number has been incremented to reflect all previous iPhone Live and iPad Live podcasts -- since they merged like Devastator!) Subscribe via iTunes: Audio | VideoSubscribe via RSS: Audio | VideoDownload directly: Audio | VideoShow notes Top 100 apps - the definitive guide COUCH TO 5K iPad/iPhone/iPod touch, $3.99 "I have to admit that I'm the non-runner in the family, but I'm hearing lots of good things about this app. The perfect plan to get someone who is exercise-averse off their butt, out of the house and onto the mean streets. The settings, social-networking links and the integration with your music collection are all designed to swing even the most recalcitrant jogger into action." SH POSTINO Android/iPad/iPhone/iPod touch/WINDOWS PHONE, FREE

Thoughts on the iPad2 in Teaching By Shelly Blake-Plock Picked up my own iPad2 about three weeks ago and, as an experiment, I have set my laptop aside and have used nothing but the Apple in the classroom ever since. And I have found that there is nothing that I do in my normal activities as a teacher that I have done with a laptop or a tablet PC that I can not do with the iPad2. Blogging? No problem...

30 Useful iPad Apps for Business & Presentation Apple sold more than 1 million copies of iPads in the first 3 months. This gadget is definitely more than just a larger version of iPhone or iPod touch. With 4x the screen of an iPhone, the iPad’s display is ideal for reading and for presentations. In today’s post, we’d like to highlight some really useful iPad applications that might replace the things you do daily with your laptop or netbook.

20 Creative iPad Apps For Web Developers And Designers Now that the iPad has been released, web developers and designers alike want to know which apps are worthy of their fingerprints. To help make the search a bit easier, I’ve compiled a collection of 20 creative iPad apps that should prove quite useful for web designers, graphic designers and anyone with a creative mind. We’ll take a look at applications that will help you get your sketch on, interact with your sites, check stats, brainstorm and even a game or two. Adobe Ideas Adobe Ideas is your digital sketchbook, letting you capture and explore ideas anywhere you go. It’s an ideal companion for the professional design applications from Adobe, including Adobe Illustrator and Adobe Photoshop software.

Turning Students Into Teachers "The best way to learn anything is to teach it to someone else". Isn't that what you've always been told? It's true ... and also a great philosophy to apply in the classroom. Most educators spend a lot of time honing their skills as teachers, expecting students to absorb and learn what they are taught. Sometimes however, students learn more effectively when empowered to learn and then teach complex concepts.