Welcome to the H-France Salon. Originating in 2009, H-France Salon is an interactive journal that welcomes proposals which will enhance the scholarly study of French history and culture. 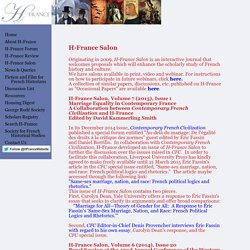 This issue of H-France Salon contains two pieces. Colonial Inspectors: French Policemen and Surveillance in French West Africa, 1914-1939. Reviewing Dakar: Urban planning at the end of Empire c.1945-1960. Marseille Hit by Violent Wave of Drug Crimes. France Keyser for The New York Times Flowers around a light pole where Walid Marzouki, whom the police suspected of being a drug dealer, was killed. 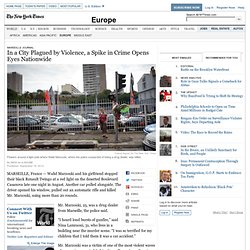 Mr. Marzouki, 25, was a drug dealer from Marseille, the police said. “I heard loud bursts of gunfire,” said Nina Lamraoui, 31, who lives in a building near the murder scene. “I was so terrified for my children that I told them it was a car accident.”

The 600-year struggle for the soul of Joan of Arc - Europe - World. Not from English captivity but from her status as a foreigner-bashing, official heroine of the French far right. 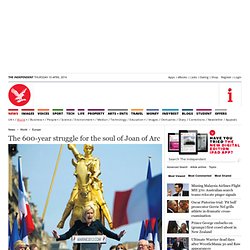 Friday marks the 600 anniversary of Joan’s birth. Mr Sarkozy will take time out from rescuing the French and European economies to attend a series of events in her native village of Domrémy-la-Pucelle in the Vosges. He will also visit Vaucouleurs in Meuse, where Joan or Jeanne or Jehanne (1412-1431) spent the early part of her brief career as a religious visionary and resistance leader. The xenophobic National Front adopted Jeanne d’Arc as an icon of ultra-nationalism two decades ago. The NF will celebrate her 600 birthday with an open-air rally led by the party’s leader Marine Le Pen and its founder, Jean-Marie Le Pen, in Paris on Saturday. The New French Hacker-Artist Underground.

Thirty years ago , in the dead of night, a group of six Parisian teenagers pulled off what would prove to be a fateful theft. 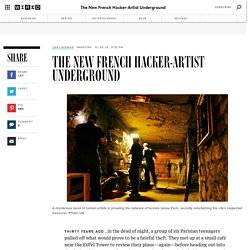 They met up at a small café near the Eiffel Tower to review their plans—again—before heading out into the dark. Lifting a grate from the street, they descended a ladder to a tunnel, an unlit concrete passageway carrying a cable off into the void. They followed the cable to its source: the basement of the ministry of telecommunications. Horizontal bars blocked their way, but the skinny teens all managed to wedge themselves through and ascend to the building’s ground floor. France's Newt Gingrich - By Eric Pape. PARIS — With rising unemployment, controversial austerity measures, another recession, and striking personal unpopularity, it's not shocking that French President Nicolas Sarkozy faces a steep climb to reelection in May. 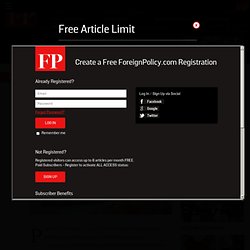 But the center-right leader's greatest obstacle is not his front-running opponent, the Socialist François Hollande, but the far-right candidate, Marine Le Pen, France's political equivalent, in many ways, of America's Newt Gingrich. Le Pen may not look much like America's doughy, retirement-age former House speaker. After all, France's insurgent on the right is a feisty, scratchy-voiced, cigarette-smoking 43-year-old blond woman. "Sarkozy at Dusk" by Dominique Moisi. Exit from comment view mode. 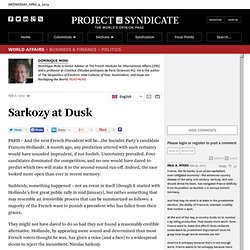 Click to hide this space PARIS – And the next French President will be…the Socialist Party’s candidate François Hollande. A month ago, any prediction uttered with such certainty would have sounded imprudent, if not foolish. Uncertainty prevailed. Four candidates dominated the competition, and no one would have dared to predict which two will make it to the second-round run-off. Suddenly, something happened – not an event in itself (though it started with Hollande’s first great public rally in mid-January), but rather something that may resemble an irresistible process that can be summarized as follows: a majority of the French want to punish a president who has fallen from their graces.

They might not have dared to do so had they not found a reasonably credible alternative. That is not to say that Hollande is charismatic. In any case, one could argue that the French are being unfair toward their president. One could easily add more such examples. A Lesser France. Divining the result of French elections is a notoriously hazardous affair. 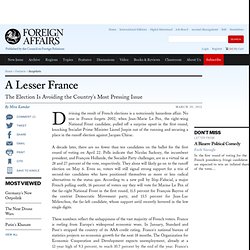 No one in France forgets 2002, when Jean-Marie Le Pen, the right-wing National Front candidate, pulled off a surprise upset in the first round, knocking Socialist Prime Minister Lionel Jospin out of the running and securing a place in the runoff election against Jacques Chirac. A decade later, there are no fewer than ten candidates on the ballot for the first round of voting on April 22.

Polls indicate that Nicolas Sarkozy, the incumbent president, and François Hollande, the Socialist Party challenger, are in a virtual tie at 28 and 27 percent of the vote, respectively. They alone will likely go on to the runoff election on May 6. France's future: A country in denial. The Rust Belt of France: Montpellier.

My wife and I have been living in France for the past nine months in a city near the Mediterranean coast. 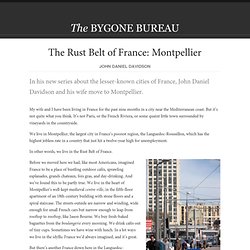 But it’s not quite what you think. La Haine Redux by Alexander Lee. Exit from comment view mode. 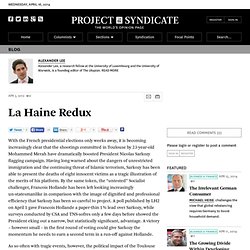 Click to hide this space With the French presidential elections only weeks away, it is becoming increasingly clear that the shootings committed in Toulouse by 23-year-old Mohammed Merah have dramatically boosted President Nicolas Sarkozy flagging campaign. Having long warned about the dangers of unrestricted immigration and the continuing threat of Islamic terrorism, Sarkozy has been able to present the deaths of eight innocent victims as a tragic illustration of the merits of his platform.

Is the left the real story in the French election? A Bizarre Political Comedy. Nicolas Sarkozy has used his country's recent tragedy -- the killing spree by French-born 24-year-old Mohamed Merah, a self-proclaimed radical Muslim -- as an opportunity to put his campaign on hold. 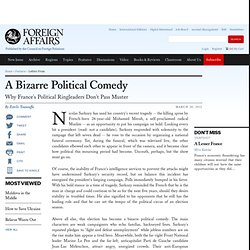 Looking every bit a president (read: not a candidate), Sarkozy responded with solemnity to the rampage that left seven dead -- he rose to the occasion by organizing a national funeral ceremony. Yet, during the funeral, which was televised live, the other candidates elbowed each other to appear in front of the camera, and it became clear how political this mourning period had become. "France’s Election by Default" by Dominique Moisi.

Exit from comment view mode. Click to hide this space PARIS – Rousseau versus Hobbes: on the cover of the French magazine Philosophie, the two leading contenders in France’s upcoming presidential election, the incumbent Nicolas Sarkozy and the Socialist candidate François Hollande, are dressed up accordingly. “The real presidential contest” according to the magazine, pits the consensual and contractual vision of Rousseau (Hollande) against the violent “every man is a wolf to his fellow man” vision of Hobbes (Sarkozy). Philospophie’s take on the French presidential election may contain some truth, but reality is far more prosaic – and far less intellectual. To understand the complexities of the race and Sarkozy’s recent (but still relative) surge, sports might be a better reference point than philosophy.

Consider Hollande’s strategy in soccer terms. Hollande wanted so much to stress his “normality” compared to the excesses of Sarkozy’s character that he ended up appearing banal. The Circus Continues. Egypt Unwrapped It has been an entertaining couple of weeks in Egyptian politics. Anti-Omar Suleiman posters in Cairo, Egypt It has been an entertaining couple of weeks in Egyptian politics. A Lesser France. Hollande Is Half the Story. Earlier this month, for the first time in the history of the Fifth Republic, the incumbent failed to take the lead in the first round of a French presidential election. Now, before the second round, scheduled for Sunday, surveys indicate that President Nicolas Sarkozy will be beaten handily by François Hollande, the Socialist Party candidate. So handily, in fact, that the French press has already moved on to speculating about the legislative elections that will take place in June. France: a politics out of time.

All opinion-polls agree: most French voters feel the current campaign for the presidency is dull, boring and remote from their main concerns. What they want is to keep their jobs and social services, earn decent wages, have less social inequality, a good education system for their children, and law and order. Sarkozy and Hollande: Desire and Fear. Why would any Frenchman vote for François Hollande, a ghost of a man with the temperament of Eeyore, over tiny, tempestuous Nicolas Sarkozy with his Napoleonic desires and flamboyant charm? I have asked this question for the past few weeks of a wide assortment of French voters I happen to know—many of them every bit as flamboyant as the man they claim to despise.

And the answer is always pretty much the same, and always astonishing: “We are tired of this cult of personality.” By “cult of personality,” the French mean that Sarkozy has one. France’s choice: naughty child or colourless adult? President Sarkozy's Desperate Mayday - By Eric Pape. PARIS – Remember May 1. Though the French election is still almost a week away, today may have been the day that hope abandoned President Nicolas Sarkozy and his run for a second term. Europe’s far right is the true winner of France’s presidential election. Photograph by Bertrand Langlois/AFP/GettyImages. "Europe’s Opportunity in Hollande" by Martin Schulz. Exit from comment view mode. Click to hide this space BRUSSELS – Rarely has an election resonated so widely across the European Union as the French presidential ballot has done. Rarely has a leadership change in one EU member state created expectations of a real policy shift.

Remarkably, a new European demos and public sphere are emerging from the economic crisis. Europeans are recognizing how interdependent they are. François Hollande’s victory is a fresh chance for Europe. Hollande’s plans for a growth initiative fall on fertile ground, especially in the European Parliament, which has repeatedly called for such measures. A new master plan for growth would not be about printing money. What is to be done? Channeling EU structural funds towards innovation is essential, given that spending on research and development is alarmingly low compared to our global partners.

Second, young people must be a top priority. The ECB has been offering long-term loans to banks at a favorable rate. The Morning After - By Eric Pape. French elections: what does normal stand for? "François Hollande Meets the World" by Noëlle Lenoir. Exit from comment view mode. Click to hide this space. Mitterrand, Hollande, and France's Socialist Legacy. Auf Wiedersehen, Mon Ami - By Benjamin Weinthal. "Hollande or Insurrection?" by Zaki Laidi. Exit from comment view mode. The End of Sarkozy, the Decline of the French-German Partnership - Max Fisher - International.