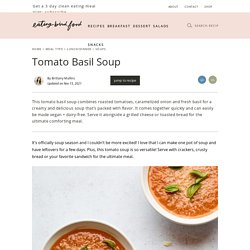 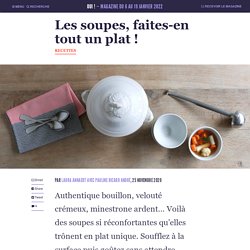 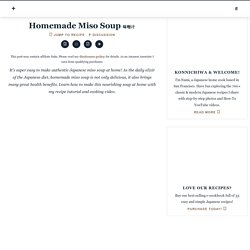 Please read my disclosure policy for details. As an Amazon Associate I earn from qualifying purchases. Soupe froide de concombre - une recette Soupe - Cuisine. The Many Lives of Roberto, a Soup. For the past month or so, ten or twenty times a day, I’ll get a little alert on my phone from Instagram, telling me that I’ve been mentioned in someone’s Story. 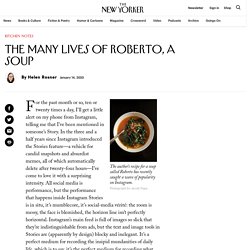 In the three and a half years since Instagram introduced the Stories feature—a vehicle for candid snapshots and absurdist memes, all of which automatically delete after twenty-four hours—I’ve come to love it with a surprising intensity. All social media is performance, but the performance that happens inside Instagram Stories is in situ, it’s mumblecore, it’s social-media vérité: the room is messy, the face is blemished, the horizon line isn’t perfectly horizontal. Instagram’s main feed is full of images so slick that they’re indistinguishable from ads, but the text and image tools in Stories are (apparently by design) blocky and inelegant. 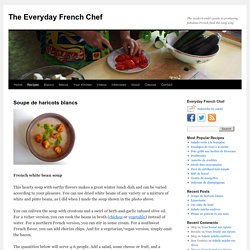 You can use dried white beans of any variety or a mixture of white and pinto beans, as I did when I made the soup shown in the photo above. You can enliven the soup with croutons and a swirl of herb-and-garlic infused olive oil. For a richer version, you can cook the beans in broth (chicken or vegetable) instead of water. For a northern French version, you can stir in some cream. The quantities below will serve 4-6 people. 2 cups dried white beans, or 1 cup each white beans and pinto beans2 onions3 garlic cloves 2 tbsp. olive oil4 strips of bacon1 bay leaf1 branch of rosemaryfreshly ground black pepper2 tsp. sea salt or regular salt Soak the beans overnight in plenty of water. Spiced Chickpea Stew With Coconut and Turmeric Recipe. Recette de soupe au panais. Green Bean Soup. As a teenager in Luxembourg, I never really thought about high class cuisine. 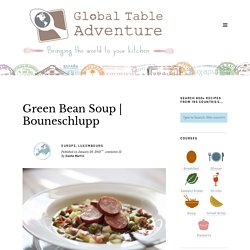 We spent a lot of time over at Quick, the aptly named fast food place. If we weren’t there, we were eating a the local pizzeria, bar, or patisserie. It’s a shame, really, because the world’s first and only female winner of the Bocuse d’Or, a highly competitive culinary competition, is from Luxembourg and has two restaurants right around the corner from where we hung out. Talk about missed opportunities. The chef’s name is Lea Linster and her impeccable dishes show that country food can be just as classy as city food. Soupe de maïs. Velouté de topinambours - Sabinoumiam. Radish Gazpacho Recipe. Velouté de brocolis - Recette de soupe facile. A Japanese Stew Puts Root Vegetables to Good Use. Continue reading the main story Video After years of shopping at the farmers’ market in the depths of winter, I finally have my root-vegetable game down. 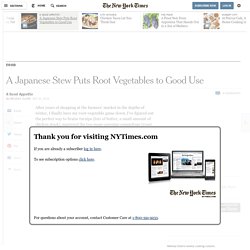 I’ve figured out the perfect way to braise turnips (lots of butter, a small amount of chicken stock), mastered the too-many-parsnips conundrum (roast with olive oil and cumin salt), and even gotten my 7-year-old to appreciate the finer points of kohlrabi (sliced thin and eaten raw). But then I got the idea to make nimono, a simmered Japanese stew. Ganso Yaki, an izakaya in Brooklyn, has an entire section of the menu devoted to different kinds of nimonos. Gaspacho aux radis. Soupe de fenouil. Recette soupe aux fanes de radis. Gaspacho de carotte à la pomme et à l’anis - une recette Equilibré. Rustic cabbage soup. Rustic cabbage soup This excellent winter soup has deep roots in the French countryside, where it was often served as the main dish at suppertime in years gone by. 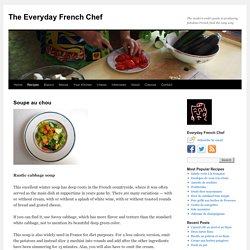 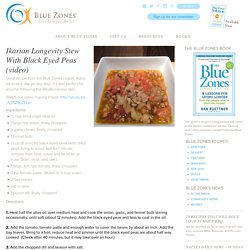 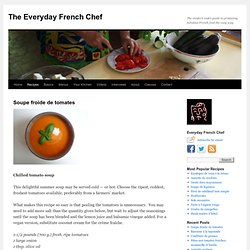 Choose the ripest, reddest, freshest tomatoes available, preferably from a farmers’ market. What makes this recipe so easy is that peeling the tomatoes is unnecessary. You may need to add more salt than the quantity given below, but wait to adjust the seasonings until the soup has been blended and the lemon juice and balsamic vinegar added. Chilled Corn Soup - Video. Spicy zucchini soup. Spicy zucchini soup This zingy soup may be prepared ahead of time and reheated just before serving. Or, in the dog days of summer, you may prefer to serve it cold. You can control the zinginess by deciding to use cayenne pepper, or not. As for the broth, it’s not absolutely necessary. Mohinga Recipe - Burmese Catfish Chowder - Burma's National Dish. Beans With Bacon. IHM Velouté frais de radis roses à la ricotta.

Pork Sinigang - Sinigang na baboy. Pork Sinigang or Sinigang na Baboy is a sour soup native to the Philippines. This particular soup dish uses pork as the main ingredient though beef, shrimp, fish, and even chicken (this is known as sinampalukang manok) can be used. Bony parts of the pig known as “buto-buto” are usually preferred for this dish. These parts can be either of the following: pork neck bone, chopped spare ribs, chopped baby back ribs, and pork belly. Sometimes pork kasim and pigue (pork ham) are also used. There are several ingredients that can be used as souring agent. Cold Pea Soup. Andalusian Gazpacho. Velouté de brocolis. Soupe crue de carotte, céleri et graines germées IHM *** La vitalité des crudités estivales vous manque ?

I had a four-level rickety home that was built in 1929, and as you walked along the floors, the creak of each wooden plank reminded you it was built in 1929. My boyfriend at the time and I gutted the entire house and remodeled, ripping out the dark wooden cabinets from the ’50s; the Astroturf on the floor in part of the kitchen that used to be the foyer to the front door from the late ’70s (yes. for real. Astroturf was in my kitchen); and broke down the suffocating walls to let light in.

My favorite part of the remodel was when we created a garden in the back. We hadn’t gotten to replacing the deck and stairway yet, something called ‘$20,000′ got in the way. Each morning was my alone time. Mexican Cabbage Soup. IHM ***

Onion Soup Les Halles Recipe *** Special equipment: Make this soup in ovenproof soup crocks. A propane torch is a very handy-dandy piece of equipment, especially if your stove is not the greatest. Nearly all professional kitchens have them; they’re not very expensive and they can be used for a variety of sneaky tasks, such as easily caramelizing the top of crème brûlée or toasting meringues. IHM Gaspacho de tomates au céleri sur un flan de parmesan *** Lemon And Coriander Soup IHM ** IHM Chickpea and Tomato Soup. IHM Cold radish soup for a hot day. + New .COMs $7.99/yr plus 18 cents/yr ICANN fee. Discount based on new one-year registration prices as of 1/27/2012 with sale price reflected in your shopping cart at checkout. Discount applies to new registrations and renewals and cannot be used in conjunction with any other offer or promotion. Domains purchased through this offer will renew at regular price after the initial term has expired.