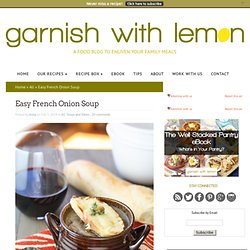 My parents drove me to college, helped me unpack, and then took me out to dinner before bidding me farewell. I didn’t know a soul at school, and my nerves got the better of me at dinner when I cried all over my meal. My poor parents. French Onion Soup. I love a day when I have time and I open up Mastering the Art of French Cooking. 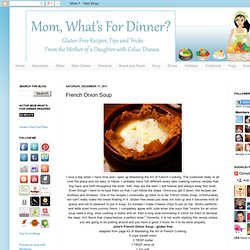 The cookbook really is all over the place and not easy to follow. I probably have 100 different avery tabs marking various recipes that hop back and forth throughout the book. Still, they are the best. French Country Short Rib and Onion Soup - Creative Culinary Recipes. It’s been awhile; I don’t think in all the many years I’ve been blogging that I have not introduced something new in such a long period of time. 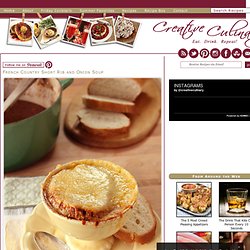 Whether planned or not, I obviously needed a break from the never ending stress of this past year; I’ve just finished sleeping almost 5 days straight when I’m lucky if normally I can get 6 hours of sleep each night. This is unheard of! I had been feeling a bit better and thought the weeks of dealing with pneumonia were finally over when the devastation from losing Abbie just took it’s toll and it came raging back with a vengeance.

I was read the riot act when I finally went to the doctor again; get rest or get admitted to the hospital. Yikes! French Onion Soup - Cuisineous. In the past week, I have made two different soups. Seriously, who does that? At any rate, French onion soup was first up and, my oh my, you’ve got to give the French a lot of credit here. While we all know the cheese is the main reason anyone orders this soup at restaurants, this week, I was having a hard-core hankering for the broth. French Onion Soup. I know what you might be thinking…SOUP, in the SUMMER? 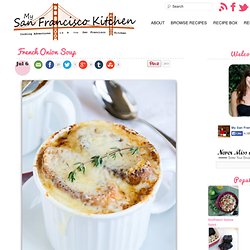 Well, it has been close to freezing here in San Francisco the past few weeks so it feels like winter to me! Tomato Mozzarella Soup. Photo by: Strudel and Cream Description Make it fresh while the tomatoes are blooming Details Ingredients 1 kg ripe tomatoes (little over 2lbs)1 big white onion3 cloves of garlic500 ml vegetable broth (16 oz)3 sprigs fresh thyme1 bay leaf1 ball mozzarella (125-150 g)Salt, pepperSome olive oil Directions 1) Line baking sheet with parchment paper. 2) Wash tomatoes and cut into eight pieces. 3) Transfer roasted vegetables together with the roasting juices into a pot and add vegetable broth. 4) While the soup simmers, cut the mozzarella into thin pieces. 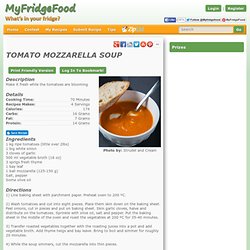 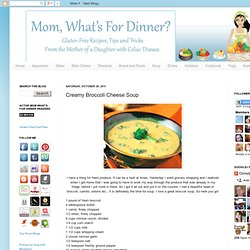 It can be a fault at times. Yesterday I went grocery shopping and I realized when I got home that I was going to have to work my way through the produce that was already in my fridge, before I put more in there. So I got it all out and put it on the counter. I had a beautiful head of broccoli, carrots, onions etc.. It is definately the time for soup. Split Pea Soup. Split Pea Soup Recipe. Ingredients 1 lb (2 1/4 cups) green split peas1 large onion, peeled and chopped2 celery stalks, chopped1 large leek, chopped1 large carrot, chopped1 large clove of garlic, halved1 herb bouquet*2 well-rinsed ham hocksSalt and PepperOptional garnish - small toasted croutons (avoid for gluten-free version)**, chopped parsley or chives *Herb Bouquet: Tie 3 cloves garlic, 4 allspice berries, 2 bay leaves, 1 teaspoon thyme, 8 sprigs parsley in rinsed cheesecloth or place in bouquet garni muslin bag. 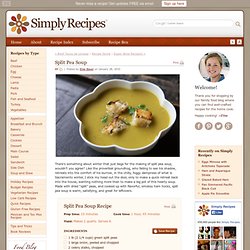 Split Pea Soup. We had our second snowfall of the season this week in Paris, which once again, blanketed the entire city with a stunning layer of snow. 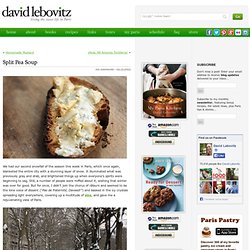 It illuminated what was previously gray and drab, and brightened things up when everyone’s spirits were beginning to sag. Still, a number of people were miffed about it, wishing that winter was over for good. But for once, I didn’t join the chorus of râleurs and seemed to be the lone voice of dissent (“Pas de fraternité, Daveed!”) And basked in the icy crystals spreading light everywhere, covering up a multitude of sins, and gave me a rejuvenating view of Paris. In addition to a blanket of politesse that also enveloped the city – drivers slowed down, people yielded to others hobbling and sliding around on icy sidewalks – snow and winter also means soup to me. Roasted Garlic Potato Soup. Fall is here and that means time to make a lot more soup! 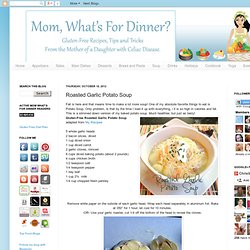 One of my absolute favorite things to eat is Potato Soup. Only problem, is that by the time I load it up with everything, i it is so high in calories and fat. This is a slimmed down version of my baked potato soup. Much healthier, but just as tasty! Paprika Chicken Soup Recipe. Soul-warming dish for the chilly Fall afternoons, this Paprika Chicken Soup is perfect for weekday dinners. I know. It’s soup. But it’s fall and I not only bake a lot but also cook our favorite dishes. As soon as the chilly mornings arrive, my Husband and I make a list of our favorite Fall dishes and add new ideas that we would like to try. Chicken Tortilla Soup.

Since I brought you a cold recipe yesterday, I decided to give you something warm today. 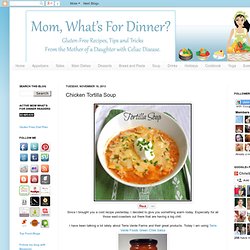 Especially for all those east-coasters out there that are having a big chill. Made with organic Roasted green chilies, our Oven Roasted Tomatoes with the perfect blend of onions, cumin, and Habanera peppers. Just like Outback Steakhouse Potato Soup. We had an April shower come through today. I woke up at 5am to rain pouring down. It was a nice cozy day. Knowing this won't last for more than a day here in Southern California, I pondered what comfort food I would make.

By 11 the rain was gone and the sun was pounding down. Oh well. 1 tsp salt 1/2 tsp Pepper1/2 tsp dried basil 1 tsp sugar or agave nectar 2 sticks of butter 1/2 cup gluten free all purpose flour 1 1/2 cups heavy cream For Garnish: 6 pieces of cooked bacon, chopped Green Onions Chopped 2 cups shredded Cheddar cheese Bring a large pot of water to a boil. Leaving the skins on, boil the potatoes for 20 minutes. Dice up your leeks and soak them in water to get out all the grit. In a large soup pot, melt the butter over a low to medium heat.Add the leeks and cook until softened. Add the gluten free flour and stir while it cooks for about 3 minutes. Slowly add the chicken broth, water, salt, pepper, basil and sugar. Bring to a boil, stirring often. Egg drop soup Gluten-Free. Randy has a horrible cold. So along with washing my hands like crazy and lysoling the house, I am making some quick soup. It is easy enough if you have some nice organic chicken stock on hand. •8 cups chicken broth or stock •4 eggs, lightly beaten •3 green onions, minced •1 teaspoon salt •1/2 teaspoon pepper In a wok or saucepan, bring the chicken broth to a boil.

Add the pepper, and salt. Cook for about another minute. Healing Soup. The Lady's Chicken Noodle Soup Recipe : Paula Deen. Gluten-Free Roasted Chicken Pot Pie. Soups Worth Making. I'm just home from Japan - thanks to an efficient series of buses, trains, planes, and one fabulously upholstered ferry. The trip started in Tokyo, then on to Kyoto, eventually making our way to the incredibly special island of Naoshima. Green Lentil Soup with Curried Brown Butter Recipe.