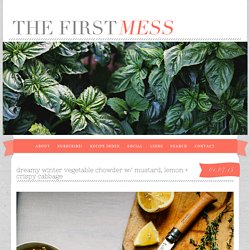 Hugs and positive thoughts going out as we all get another beautiful chance to start again. I hope everyone got a solid stretch of personal downtime over the holidays–to read, create, travel, have a long bath, cook, bake, play, be in nature or just do absolutely nothing. Green split pea soup - Amy Chaplin. Green split pea soup POSTED ON February 23, 2012 Green split pea vegetable soup with thyme The mild weather, soft sunshine and blooming quince branches from the local green market are making me feel like spring has sprung. 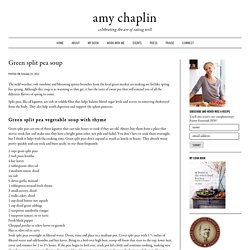 Although this soup is as warming as they get, it has the taste of sweet pea that will remind you of all the delicious flavors of spring to come. Split peas, like all legumes, are rich in soluble fiber that helps balance blood sugar levels and assists in removing cholesterol from the body. Table. Red Curry Lemongrass Soup Recipe. We’re nearing the end of soup season here, but I just had to get this one in before we break into summer recipes. 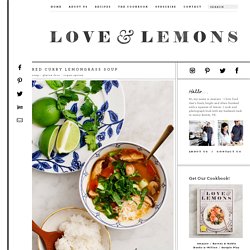 Or at least, before we break into cold summer soup recipes and before I go ga ga for gazpacho (ugh, I’m so sorry). This is a warm and spicy one for the soul. Sopa Verde de Elote Recipe. Not that I need much encouraging, but I've been compiling a good number of older cookbooks - early titles by authors I love, first editions, and such. 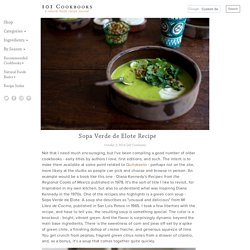 The intent is to make them available at some point related to Quitokeeto - perhaps not on the site, more likely at the studio so people can pick and choose and browse in person. An example would be a book like this one - Diana Kennedy's Recipes from the Regional Cooks of Mexico published in 1978. It's the sort of title I like to revisit, for inspiration in my own kitchen, but also to understand what was inspiring Diana Kennedy in the 1970s. One of the recipes she highlights is a green corn soup - Sopa Verde de Elote. A soup she describes as "unusual and delicious" from Mi Libro de Cocina, published in San Luis Potosi in 1965. Cool Down With This Green Goddess Summer Soup. Creamy millet corn chowder with greens » The First Mess // healthy vegan recipes for every season.

“Does this rye have wheat in it?” 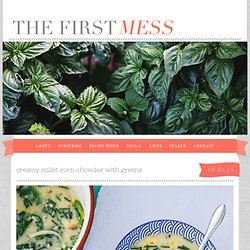 My coworker asked me last Saturday night. One of her tables had asked for a rye-based drink, but the woman had a wheat intolerance. Celery Root and Apple Soup Recipe with Tarragon. When I consider what to cook for dinner, I often begin by choosing a single ingredient that either inspires me or intimidates me. 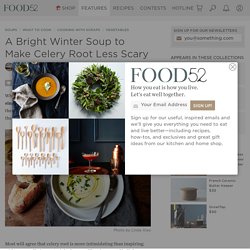 And then I cook with the ultimate goal of making that ingredient taste like the best possible version of itself. Most will agree that celery root is more intimidating than inspiring; with a mess of hairy roots, it looks more like a lumpy softball than a vegetable. I decided to cook with it this past week because it’s abundant and inexpensive right now, but also for a deeper reason: While anyone can serve lobster or filet mignon and have it taste good, successfully turning an ingredient like celery root into something glorious is an exhilarating experience. Seriously. The first step to cooking an intimidating ingredient is reflection: I try to remember experiences I have had with the ingredient, its tastes and smells. 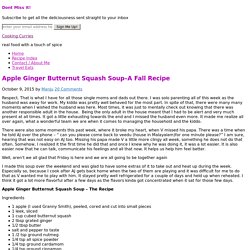 That is what I have for all those single moms and dads out there. I was solo parenting all of this week as the husband was away for work. My kiddo was pretty well behaved for the most part. In spite of that, there were many many moments when I wished the husband was here. Most times, it was just to mentally check out knowing that there was another responsible adult in the house. Cucumber radish avocado gazpacho. I had gazpacho for breakfast today, and I reazlied …. gazpacho is kind of like a smoothie. 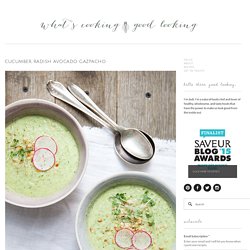 Same concept, a combination vegetables blended until smooth, although gazpacho tends to be little more refined. A little more attention is paid to the seasoning and proportions. Some might think that the gazpacho / smoothie similarities are good thing (I certainly do). Others might find that the smoothie relation might turn them off from enjoying gazpacho as a "meal" meal. I also know a fair amount of people who think that soup should only be served warm. Miso Tahini Soup Recipe. Last weekend we took our little shop project, QUITOKEETO, to the Remodelista Holiday Market. 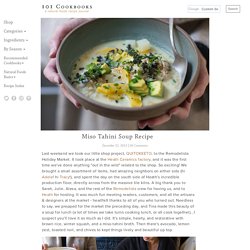 It took place at the Heath Ceramics factory, and it was the first time we've done anything "out in the wild" related to the shop. So exciting! We brought a small assortment of items, had amazing neighbors on either side (hi Adele! Heidi Swanson's Spicy Green Soup Recipe on Food52. Cooking is more fun with friends. 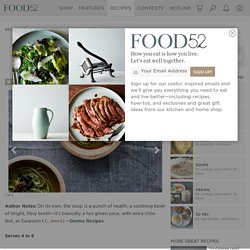 Find your friends who are already on Food52, and invite others who aren't to join. Let's GoLearn more Join Our Community Follow amazing home cooks. Collect recipes and articles. Sign Up. Baby Lima bean soup with butternut and sage - Amy Chaplin. Baby Lima bean soup with butternut and sage POSTED ON January 19, 2013 Baby Lima beans awaiting their soak From now until spring I find soups make up a large part of my meals. Once cooked, they make great fuss-free lunches or quick and easy dinners. Baby limas are the perfect bean for soups as they break apart and become creamy in much less time than other beans. These beans are best cooked without a pressure cooker, as their skins separate and can clog the valve. I made some sizzled sage leaves to garnish but you don’t need them, the soup is well infused with the lovely flavor of sage as it cooks.

Winter miso soup with ginger and kale - Amy Chaplin. Winter miso soup with ginger and kale POSTED ON December 28, 2011 miso soup After cooking and eating all the rich and festive foods of the holidays, I love to make a pot of simple miso soup. Best Lentil Soup Recipe. Fall Vegetable Soup with Butternut Squash — Produce On Parade. Thanks to one of my beautiful sister-in-laws, I am now blessed with the privilege of being subscribed to Vegetarian Times. I had been wanting to subscribe to Vegetarian Times as well as Vegnews for a while, but I just hadn't got around to it and I have to say, I am loving it!

Well, I still don't have Vegnews (gift idea for me anyone!?) Heh heh. Secret Ingredient Superfood Veggie Soup (V + GF) So remember how this site is all about balanced living? Eating mostly very healthy and treating yo’ self every now and then, too? That whole 80-20 rule. Well apparently my math skills have been a bit off lately…last week was not pretty. Mind you, it was Thanksgiving… but my eating habits were more akin to those of a deranged death row inmate preparing for his last meal …er, like the 20-80 rule. Orange-Scented Red Lentil Soup with Celery Root, Green Apple, and Cilantro - DOWNTOWN EPICURE. Vegan Celery Soup with Ryeless Rye Croutons. By the time you read this new soup recipe, we'll be well on our way to Southern California.

It will Monday, you see (it is Monday, right?). It will be bright and early. And we'll be waving our coffee fueled good-byes to piney Flagstaff, Arizona, the infamous gateway to the Grand Canyon (inspiration for Steve's movie ) where we stayed overnight. We'll be up with the chickens, Honda packed with gluten-free treats, hitting Route 40 West for the second leg of the trip. This feels a bit like time travel- I'm writing this post ahead of time to stay connected, to keep you in the loop.

Leek Soup with Dill Oil Recipe. I'm in the midst of packing for a quick trip up to Portland, but I wanted to share this leek soup recipe before I go back to attempting to shoehorn my clothes, laptop, toothpaste and such into a carry-on. The soup. Chilled Parsley and Pea Soup. What I am about to say should not be misconstrued as a complaint: Copenhagen is hot. Egg Drop Soup with Ginger, Chiles + Spring Peas recipe on Food52.com.

Author Notes: Egg drop soup is an early food memory for me, brought home in Styrofoam cartons from a cheap Chinese takeout restaurant and slurped in thick, salty swallows. The lacy egg, though, always seemed to be a bit out of place in such a humble dish, so I thought that giving it a touch of spring vegetables would lend it a delicate freshness to match. Cucumber and Avocado Soup. LA is notorious for fabulous 70 degree weather year around, but this week the weather gods decided to strike us with blistering 105 degree temperatures, which has put much of the valley up in flames. Chickpea Hot Pot Recipe. Adzuki Butternut Squash Soup Recipe. Red Lentil Soup with Lemon Recipe. Annie's mushroom soupEvery Bite is Divine.