Broccoli & Lemon Soup With Quinoa & Feta Recipe. Sweet Potato Soup With Cheese & Thyme Toast Recipe. Thai Red Curry Cauliflower Soup Recipe. Anytime Asian Noodle Soup Recipe. This noodle soup is delicious and easy to make and modify for whatever vegetables or protein that you have in your kitchen. 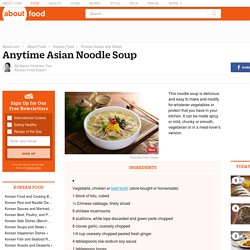 It can be made spicy or mild, chunky or smooth, vegetarian or in a meat-lover's version. Preparation Bring broth up to a boil. Add garlic and ginger to broth and reduce to simmer. Add mushrooms and pepper and cook over low heat for 10 minutes. The oldest noodles have been eaten and enjoyed in Asia for over 4,000 years, but the modern wheat-based noodles did not reach Asia until around AD100. In Korea, noodles symbolize longevity because of their long and continuous form. Some Notes about Ginger: Ginger is native to Asia where has been used as a cooking spice and as medicine for thousands of years. The part of the plant that we use is not the root, but the underground stem, or rhizome. Ginger has been used to aid digestion and treat stomach problems, gas, diarrhea and nausea for more than 2,000 years.

Sunset Lentil and Sweet Potato Soup. Soup doesn’t get more satisfying than this — thick and richly flavored with savory lentils and vegetables. 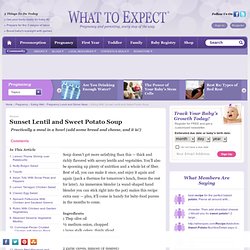 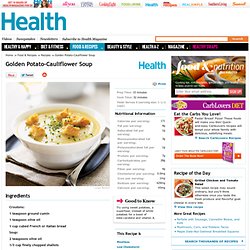 Preheat oven to 350°. 2. 3. Sweet Potato–Star Anise Soup with Ginger Cream Recipe. Difficulty:Easy | Total Time: | Active Time: | Makes:6 servings We love sweet potatoes, and we think they deserve a place at the table even when it’s not Thanksgiving, so we created this deceptively simple soup. 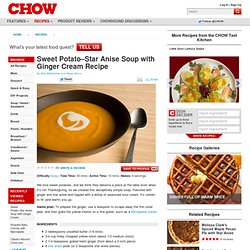 Flavored with ginger and star anise and topped with a dollop of seasoned sour cream, it’s certain to fill (and warm) you up. Game plan: To prepare the ginger, use a teaspoon to scrape away the thin outer peel, and then grate the yellow interior on a fine grater, such as a Microplane zester. Wonton Soup. Before you scroll down, take a look at the ingredients and directions for this recipe and tell me to go screw myself, just STOP! 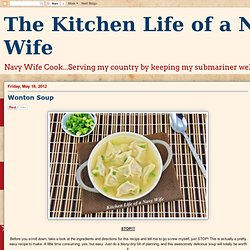 This is actually a pretty easy recipe to make. A little time consuming, yes, but easy. Just do a teeny-tiny bit of planning, and this awesomely delicious soup will totally be worth it. Now, when I say 'planning', I mean this; decide what day of the week you want to make this (I'm posting it on a Friday since this just screams weekend lunch or dinner). Make the wonton filling earlier that day...I made mine at about 11am, just to get it out of the way. Now...assembling the wontons. Lentil, Sweet Potato & Pancetta Soup Recipe. 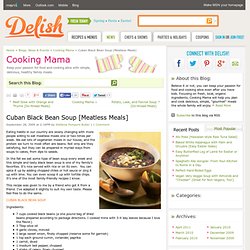 We eat lots of vegetarian meals in our house, and the protein we turn to most often are beans. Not only are they satisfying, but they can be prepared in myriad ways from soups to cakes, from dips to salads. In the fall we eat some type of bean soup every week and this simple and tasty black bean soup is one of my family's favorites. It's nice served with rice or on its own. This recipe was given to me by a friend who got it from a friend. Ingredients: 7 cups cooked black beans (a one pound bag of dried beans prepared according to package directions. Drain the beans and reserve the liquid. In a large dutch oven or soup pot, saute onions, garlic, and spices in oil over medium heat, stirring until onions are translucent. Combine the drained black beans with the vegetables. 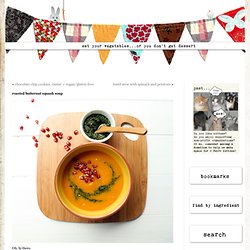 I haven’t felt all that great lately, so this little space has been a bit neglected. But, last night, I got back into the kitchen. It felt good. I tried to make these lemon cranberry scones, substituting buttermilk for heavy cream. I had to scoop the liquid-y batter onto the sheet pan, and ended up with muffin tops. Also made some moroccan-spiced spaghetti squash over couscous. What I really came here to share, though, is a roasted butternut squash soup. Peel a 2-2.5 pound butternut squash and cut into smaller pieces. While this was happening, I used a blender to puree 5 cups vegetable stock along with a tablespoon of fresh ginger and a couple of teaspoons of chile paste. I also chopped up a bunch of cilantro along with 2 cloves of garlic and a handful of sliced almonds.

Also…I de-seeded a pomegranate. Once the vegetables were roasted, I took them out of the oven and put the pot on the stove over a medium flame, adding the stock mixture. Cheers! Lentil, Barley And Mushroom Soup Recipe.