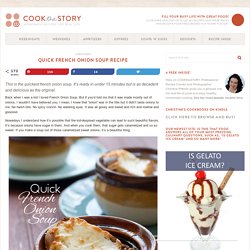 It’s ready in under 15 minutes but is as decadent and delicious as the original. Back when I was a kid I loved French Onion Soup. But if you’d told me that it was made mostly out of onions, I wouldn’t have believed you. I mean, I knew that “onion” was in the title but it didn’t taste oniony to me. Nowadays I understand how it’s possible that the kid-despised vegetable can lead to such beautiful flavors. Pin this quick and DELICIOUS recipe! This French Onion Soup is ready in under 15 minutes, like all of my SOUPin15 recipes.

As with all of the SOUPin15 recipes, this one comes with a SouperTip for making soups delicious in a short amount of time. You won’t be able to taste the wine in the soup. And now, here’s my Quick French Onion Soup recipe: Ingredients: Directions: Cut the butter into small pieces and put it into a very large skillet over medium heat. Who loves cheese??? Have a delicious day! Leave a Comment. Red Pepper & Carrot Soup. Autumn - Red Pepper & Carrot Soup Autumn has arrived and what could be better than to prepare a bowl of homemade soup? 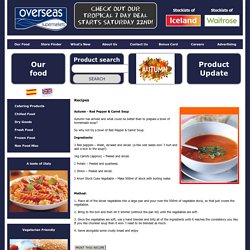 So why not try a bowl of Red Pepper & Carrot Soup. Ingredients: 3 Red peppers – Wash, de-seed and sliced. (a few odd seeds won´t hurt and add a kick to the soup!) Recipe: Lindsey Bareham’s magenta soup with roast tomatoes. This fabulous thick, creamy soup is almost worth making just for its rich magenta colour and fluffy, light texture. 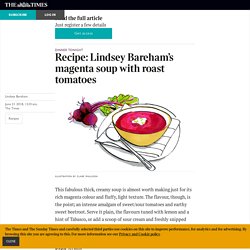 The flavour, though, is the point; an intense amalgam of sweet/sour tomatoes and earthy sweet beetroot. Serve it plain, the flavours tuned with lemon and a hint of Tabasco, or add a scoop of sour cream and freshly snipped chives just before serving. Skye McAlpine’s chilled almond soup recipe. Carrot and Coconut Soup. Recipe: Hearty Chicken & Corn Chowder. For a hearty chowder that’s not thickened with flour, simply puree a portion of the soup in a blender. 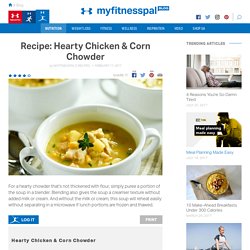 Slow Cooker Black Bean Soup. Oh, the simple joy of cozying up next to a bowl of hearty black bean soup! 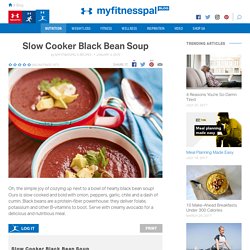 Ours is slow cooked and bold with onion, peppers, garlic, chile and a dash of cumin. Black beans are a protein-fiber powerhouse: they deliver folate, potassium and other B-vitamins to boot. “Loaded” Potato Soup. Turn a childhood favorite, the fully loaded baked potato, into a hearty, warm bowl of soup — all fixings included. 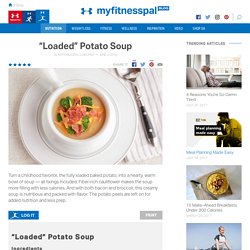 Carrot, Red Lentil, and Spinach Soup. I've gotten a lot of positive feedback on my last post about sharing my favourite go-to recipes for every day. 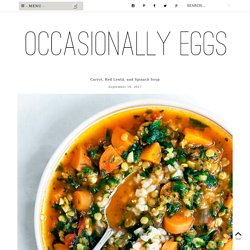 This is another recipe I make all the time, and it's so great for 1. when I haven't gotten groceries for three days, 2. when my budget is low, or 3. when I'm starving and need a quick and easy dinner that isn't pasta. It can be finished in about half an hour, including prep time, which is just chopping carrots, onions, and garlic. Curried Butternut Squash Soup. Chickpea and Tomato Soup recipe. Keep-me-warm curry soup. 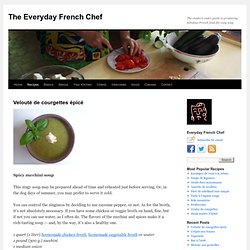 Or, in the dog days of summer, you may prefer to serve it cold. You can control the zinginess by deciding to use cayenne pepper, or not. As for the broth, it’s not absolutely necessary. If you have some chicken or veggie broth on hand, fine, but if not you can use water, as I often do. 1 quart (1 liter) homemade chicken broth, homemade vegetable broth or water1 pound (500 g.) zucchini1 medium onion1 tsp. sea salt or table salt1 tsp. dried tarragon1 tbsp. fresh lemon juice1/2 tsp. ground cuminfreshly ground black pepper1 small dried cayenne pepper (optional)2 tbsp. crème fraîche or 1 tbsp. heavy cream plus 1 tbsp. sour cream fresh herbs: basil, cilantro, dill (optional) Pour the broth or water into a soup pot. Rinse the zucchini, remove the ends and cut into chunks. Add the zucchini, onion, salt and tarragon to the soup pot. Super easy beef and cabbage soup. 25.2K Flares Facebook 5K Google+ 4.7K Pin It Share 15.6K 15K+ Twitter 0 Email -- Email to a friend Filament.io 25.2K Flares × This soup could not be easier to make, just throw all the ingredients into a pot and 1 hour later enjoy the most delicious beef and cabbage soup. 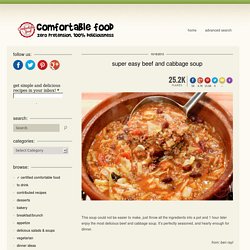 It’s perfectly seasoned, and hearty enough for dinner. from: ben rayl. Healing Cabbage Soup Recipe. Hearty chicken soup. Warm up with a hearty chicken soup with a twist, this version is chock full of wholesome root vegetables leaving you feeling fuller for longer. 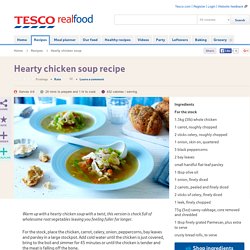 For the stock, place the chicken, carrot, celery, onion, peppercorns, bay leaves and parsley in a large stockpot. Add cold water until the chicken is just covered, bring to the boil and simmer for 45 minutes or until the chicken is tender and the meat is falling off the bone. Remove the chicken from the stock and leave to cool slightly. Take the meat off the bones, tear into bite-size pieces and set aside. Return the bones to the stock and continue to cook the stock over a low heat while you prepare the vegetables. For the soup heat the olive oil in a large saucepan, add the onion, carrot, celery and leek, and fry over a low heat until softened.

Strain the stock into the softened vegetables and discard the bones, stock vegetables, peppercorns and bay leaves. See more #EvenBetter recipes. Ham and pea soup with crispy onions and feta. A hearty, delicious soup packed with lots of flavour. Dried split green peas are combined with crumbled pieces of feta cheese, strips of gammon steak and lots of green vegetable and herbs - making it a vibrant meal to tuck into.

Drain the soaked peas and tip into a large pan. Cover with 1.5ltr (2 1/2pt) water, then add the onion and bay leaves. Bring to the boil, skimming of any scum that forms, then simmer for 45 minutes, until tender. Drain the peas and return to the pan. Meanwhile, heat the oil in a large frying pan over a low heat. Wipe most of the oil from the pan, then increase the heat and fry the gammon for 2-3 minutes on each side, or until cooked through. Stir the spinach into the soup and then, using a stick blender, whizz until almost smooth.

Moroccan chickpea soup. Beef goulash soup. Mexican bean soup with crunchy tortillas. Rich French Onion Soup. Hearty Beef Soup. Look no further, this is the BEST EVER Hearty Beef Soup! With tender, juicy chunks of beef that melt in your mouth and a glorious rich soup loaded with vegetables, it is truly the ultimate comfort food. This simple recipe has minimal active time, and it is sure to be on your table again and again. It has been on ours! If you are looking for the most spectacular fall soup, this is the one. Leek and Potato Soup. Method Peel and roughly slice the carrots. Slice the celery. Soup. Mexican (Very) Vegetable and Bean Soup with Jalapeño-Herb Topping. This easy, slightly spicy (although the heat is really up to you) soup can be made with whatever is seasonal. The main thing to keep it vaguely on a Mexican wave(length) is actually the herbs, lime and pickled jalapenos – all easily obtained year round.

Do adjust to your own palate, although I have deliberately kept it on the family-friendly end of the spectrum. “For once”, you might legitimately add. ;-) Enjoy xx. Ultra low calorie, veg packed Thai noodle soup. Veggistrone Recipe - EatingWell. Beef, Barley And Vegetable Soup Recipe. Step 1 Heat half the oil in a large saucepan over high heat. Add the beef and cook, stirring often, for 2-3 minutes or until browned.

Transfer to a plate. Step 2 Add remaining oil to the pan. Add the onion and cook, stirring occasionally, for 5 minutes or until soft. Add the garlic and oregano, and cook, stirring, for 1 minute or until aromatic. Red lentil, chickpea & chilli soup. Lentil & bacon soup. Hearty pasta soup. Winter minestrone with pesto croûtes. Chorizo & chickpea soup. Moroccan chickpea soup. Chilli bean soup with cheesy garlic bread. Heat the oil in a large pan over a medium-high heat and cook the onion for 5 minutes until softened. Stir in the garlic, tomato purée and spices and cook for 1 minute, then add the chopped tomatoes and stock.

Research shows that soups can help you lose weight: in one study, published in the journal Physiology & Behavior, people consumed the fewest calories on days when they ate soup rather than the same ingredients in solid form. Jamie Oliver's spicy tomato soup recipe. Freezing: Soups. Return to listing Most soups freeze brilliantly and will provide endless suppers and weekend lunches when you are too busy or tired to cook. All you have to remember is to give them time to defrost... Curried Carrot, Sweet Potato, and Ginger Soup Recipe. Flatulent Free Bean Soup Recipe. Hearty vegetable soup (whole 30 approved recipe) - I Heart Naptime. Lettuce & mint soup. Sausage pasta broth This broth is a great way to use up leftover bits and pieces Serves 2 • Ready in 50 mins. Sausage pasta broth. Butternut Squash Soup with Apple Grilled Cheese Sandwiches Recipe.

Maybe it was the cumin or the turmeric or the combo or the coconut milk but this was the most vile tasting thing I have ever eaten! I threw it out. I roasted my squash and it was perfectly roasted and carmelized and tasted delicious until I added the rest of the recipe. 17 Easy Soups You'll Want to Make This Fall. Chilli chicken broth recipe. Italian spring vegetable soup recipe. Broccoli soup with toasted walnuts recipe. Spring leek soup with dumplings. Adding salt to food is something you might do without even thinking. But have you stopped to check whether it’s actually needed? Is your food lacking sweetness, sourness or savouriness, for example? Perhaps it just needs more creaminess? There are lots of alternatives for adding flavour — and it can even make a difference whether you do so at the beginning or end of cooking — as our recipes show.