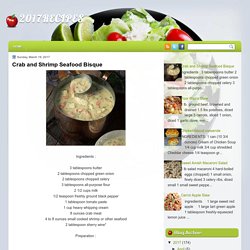 Blend the flour into the butter and vegetables until well incorporated. Warm the milk in another saucepan over medium heat. Slowly stir in the warmed milk and continue cooking and stirring until thickened. Add the freshly ground black pepper, tomato paste, and heavy cream. If desired, puree the soup in a blender or food processor** at this point and then return it to the saucepan.

Stir in the crab, shrimp, and the sherry. Serve hot. Tips and Variations Feel free to add small cooked bay scallops or lobster instead of the shrimp. Hangover Soup Recipe. Fill a soup pot with 8 cups water set on medium-high heat.In a pan, fry the chopped bacon. 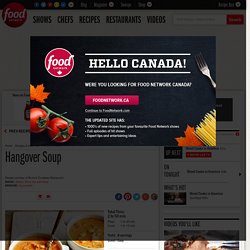 When it is done, take out and put into the water in the soup pot.In the drippings of the bacon, fry the pork loin and then the onions. When brown, put them into the soup pot and bring to a boil. Add the crushed tomatoes, mushrooms, celery root, celery, carrots and some salt and cook for 15 minutes.Next, add the potatoes, sausage, leeks, allspice, bay leaves Hungarian paprika and cook for another 15 minutes.Add the pickles, garlic and seasoning if using, and let boil for 10 minutes. Add the dill and heavy cream and season with salt and pepper. Crab and Shrimp Seafood Bisque Recipe. Updated April 04, 2016. 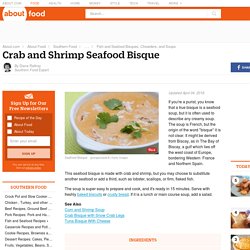 If you're a purist, you know that a true bisque is a seafood soup, but it is often used to describe any creamy soup. The soup is French, but the origin of the word "bisque" it is not clear. Tuscan Bean, Chicken, and Italian Sausage Soup Recipe. Olive Garden Pasta e Fagioli. A super easy, no-fuss copycat recipe that’s wonderfully hearty and comforting, except it tastes 100x better than the restaurant-version! 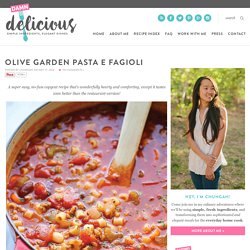 I know I should be posting about ice cream and refreshing summery drinks this time of year but even in 100 degree weather, I still need a bowl of soup, especially if it’s my all-time favorite Olive Garden soup! Yes, this is the complete copycat of Olive Garden’s heartwarming Pasta e Fagioli, which is a pasta and bean soup. And it’s seriously so easy to make right at home! All that takes some effort is the prep work for the veggies. That’s it! And if you’re anything like me, you’ll have the AC blasting on your face as you stuff yourself with this hearty, cozy copycat soup! Olive Garden Pasta e Fagioli An Olive Garden copycat recipe that's wonderfully hearty and comforting, except it tastes 100x better than the restaurant-version! Ingredients Instructions Notes Enter your email address below to have new recipes delivered right to your inbox!

Sausage, Beans and Broccoli Rabe Soup Recipe : Rachael Ray. The Pioneer Woman. I made this soup on my Food Network show a few weeks ago, and it’s seriously one of those recipes that makes a person say phrases like, “Uh…could you repeat that?” 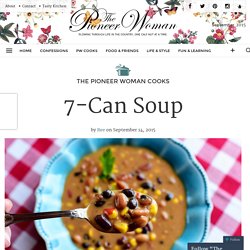 And “Whaaaaa?” And “Crazytown!” And other questions/exclamations that convey surprise over how such a simple list of ingredients could result in something so, so good. 7-Can Soup has been around for a long time, and no two recipes are identical, but they basically amount to this: * 7 cans of whatever you want. Don’t drain the cans.

Not. Here are the cans you need for seven can soup! From left to right, here are my crazy choices: canned chili (which admittedly is one of the most questionable-looking canned foods known to man), canned corn (I used the Fiesta kind!) Now, you may notice that there are only six cans in this photo. But that’s what makes life thrilling around my house. Chicken Tortilla Soup. I love, love, love, love Chicken Tortilla Soup. 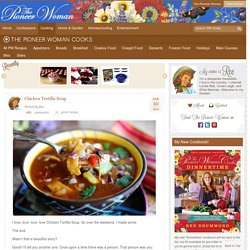 So over the weekend, I made some. The end. Easy Thai Shrimp Soup. Skip the take-out and try making this at home – it’s unbelievably easy and 10000x tastier and healthier! 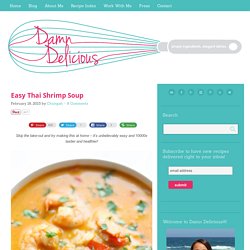 I am such a sucker for Thai take-out, particularly for red curry and coconut soup. I order it on a weekly basis! But ordering take-out this often has been getting a bit costly so this homemade coconut curry soup comes in very handy. Sausage, Potato and Spinach Soup. A hearty, comforting soup that’s so easy and simple to make, loaded with tons of fiber and flavor! 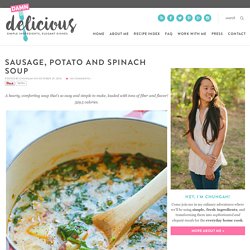 329.5 calories. A bowl of true comfort food on your dinner table in 30 min or less. That’s something I can live with all week. Cheeseburger Soup. All the flavors of a cheeseburger in a creamy, comforting soup, topped with crisp bacon bits and hamburger bun croutons! 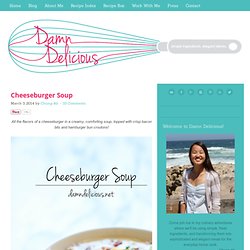 I love a good old fashioned cheeseburger just as much as the next person, but I can’t have it as often as I’d like or else I’d gain about 50 pounds. But when you serve it up in a bowl in the form of a comforting, cheesy soup – well, I think I could pretty much have that every single day of the week! This cheeseburger soup has quickly become a number one favorite in our house. It’s loaded with so much goodness – from the ground up meat to the tender, crumbly potatoes. And you can’t forget the best part about the soup, which are, of course, the garnishes – the crumbled, crisp bacon bits, the extra cheddar cheese and the crunchy homemade hamburger croutons. Now isn’t this just so much better than an actual cheeseburger?