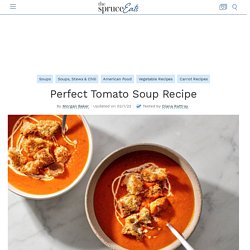 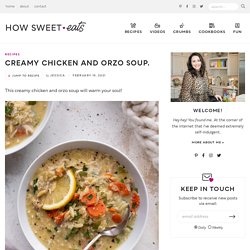 With so many of you under snow right now, this is the perfect hug in a bowl. The most comforting chicken orzo soup bowl that will keep you warm, that will bring happiness to a friend or family and all while tasting delicious! Oh and it’s extra satisfying too. We have had a ton of snow this week – and more snow the last few weeks that we’ve had in years. As a kid, I remember us having TONS of snow, the entire winter. Pork, Poblano, and Pumpkin Stew. Smitten Kitchen Has a Clever Trick For Making the Best Tomato Soup Ever.

Published about 3 hours ago We independently select these products—if you buy from one of our links, we may earn a commission. 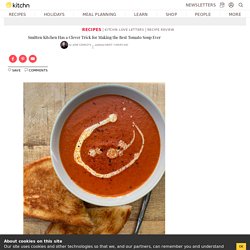 If you’re a fan of cooking, chances are you’re familiar with Smitten Kitchen. The longtime food blog created by Deb Perelman is beloved by many for its simple-yet-comforting recipes that are always a success. I’ve written about my love for her recipes in the past, and whenever I’m searching for a new recipe to make, Smitten Kitchen is one of the first places I turn. Chicken Bog. A Southern specialty from South Carolina, chicken bog is similar to a chicken and rice pilau (also known as a pilaf, pilau, or perlou) and is frequently made in large amounts for special events. 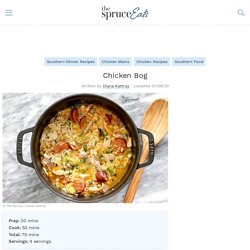 According to Karen Hess, author of "The Carolina Rice Kitchen," a bog was often made in washtubs or large kettles for special events, making it wet or "boggy" when compared to a proper pilau. The typical bog includes chicken, rice, and smoked sausage and it starts with a well-seasoned chicken broth. As with many one-pot recipes, the chicken bog lends itself to all kinds of variations. The BEST Taco Soup Recipe. 18 Delicious Creamy Soup Recipes. Creamy Tortellini Soup Recipe. My favorite cozy weeknight soup made in just 30 min! 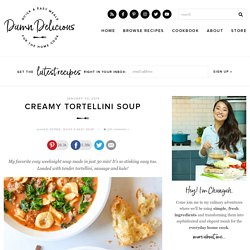 It’s so stinking easy too. Loaded with tender tortellini, sausage and kale! Save Have you seen the news? It’s apparently -50 degrees windchill in Chicago right now. I wish I was joking. 40+ Best Slow Cooker Soup Recipes. Slow Cooker Beef Bourguignon Recipe. Forget the fuss of a typical Boeuf Bourguignon, but keep all the scrumptious flavors!

A classic Boeuf Bourguignon, which was made famous by Julia Child in her cookbook Mastering the Art of French Cooking, is a beef stew slowly simmered in burgundy wine. While that sounds simple enough, the dish is notorious for having over two dozen steps and requiring niche ingredients like pearl onions. I wanted to keep that perfect melding of French Boeuf Bourguignon flavors such as bacon, wine, and thyme, but in a recipe that would be viable for a weeknight meal. Behold: Slow Cooker Beef Burgundy! In this slow cooker version, beef is cooked gently until tender in a braise of herbs, vegetables, and red wine. Fully Loaded Baked Potato Soup. Fully Loaded Baked Potato Soup is exactly what we all need simmering away on the stove right now. 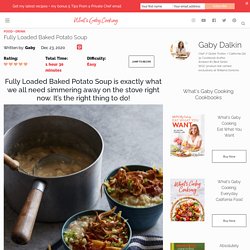 It’s the right thing to do! We’re really weird people here in LA. We don’t handle the cold well. Driving down the street these days, no joke every single woman is bundled up in leggings, jackets, vests, scarves and Ugg boots. It was ah-mazing and hysterical and embarrassing all at the same time. Classic Beef Bourguignon Recipe. Ham and Corn Chowder Recipe. Slow Cooker Creamy Chicken Wild Rice Soup. Sharing is caring! 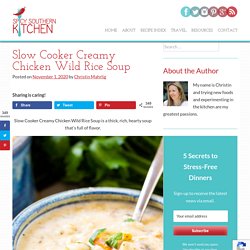 Slow Cooker Creamy Chicken Wild Rice Soup is a thick, rich, hearty soup that’s full of flavor. Shredded chicken, mushrooms, carrots, celery and plenty of herbs and spices make this one heck of a winter soup. So filling! Serve it with some crusty fresh bread and/or a salad for a full meal. BEST Clam Chowder Recipe (Market Street Copycat) A favorite of locals and tourists alike, this creamy New England clam chowder recipe comes from one of Salt Lake City’s longest running restaurants, Market Street Grill, and is easy to make at home. 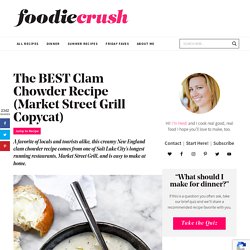 Creamy New England Clam Chowder Creamy, full of vegetables and lush with clams, this homemade clam chowder recipe is delicious in every respect, and I’m saying it loud and proud that it’s the best clam chowder recipe outside of New England. Yep, I’m staking my claim. It comes from the restaurant where I met my husband when we were both servers, Salt Lake City’s acclaimed Market Street Grill, where this chowder is probably still one of the most popular bowls of soup you will find in the state. From San Francisco to New England, I’ve been to a whole lot of places and ordered a whole lot of chowder, and still to this day, this chowder is tops on my list.

What’s in This Clam Chowder? You may be asking, what’s the difference between Boston, New England, and Manhattan clam chowder? Ground Turkey Chili With Variations. Thai Coconut Curry Soup Recipe. Skip the takeout! 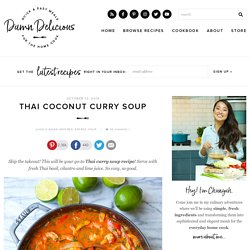 This will be your go-to Thai curry soup recipe! Serve with fresh Thai basil, cilantro and lime juice. So cozy, so good. Easy Hot and Sour Soup. So much tastier (and FASTER) than delivery! 30 min start to finish. Made with homemade wonton strips. Cheeseburger Soup. Award Winning Cheeseburger Soup is a thick and hearty soup with lean, tender ground beef, shredded carrots, diced celery and potatoes in a warm and creamy cheese soup. This is an award winning soup and it is excellent! Cheeseburger Soup This award winning cheeseburger soup is just what you need this winter season. It is thick, rich and full of flavor!

You can’t go wrong with something SO good. Slow-Cooker Curried Sweet Potato Soup With Coconut and Kale Recipe. Spicy Corn and Coconut Soup Recipe. Chilled Corn Soup With Basil Recipe. Chicken Stew. Chicken Stew is a hearty, filling and comforting! It is the perfect dish for Sunday dinner or a cold rainy day! This chicken stew is made with potatoes, carrots, onions, celery and chicken cooked until fall apart tender. Stews are a fall favorite! American Nongshim Versus Korean Nongshim: An Instant Noodle Showdown. [Photographs: Sho Spaeth] South Korea should be the envy of all Americans. They have better movies, better boy bands (with better fans), a better body politic, a better bead on how to beat this pandemic. It should come as no surprise that South Koreans also enjoy better instant noodles.

A few months ago, I wrote about how Shin Ramyun, the iconic and now ubiquitous instant noodle product produced by Nongshim, had compromised its quality when reformulating its noodles for a cup noodle version. I also noted in passing that I thought Shin Ramyun Black, a putatively premium version of that product, was inferior in every way to the less expensive original. I suppose it was inevitable that someone would suggest that I do a similar comparison of Nongshim products, trying Korean versions of Shin Ramyun and Shin Ramyun Black side-by-side with American versions of those products, to see what, if any, differences existed, and whether I preferred one over the other. Recipe of the Day: Black Bean Soup. If you’re looking for some easy meal prep hacks, look no further than whipping up a big ol’ batch of black bean soup. Ready in just about one hour and packed with black beans for protein, this soup also tastes remarkably similar to the one served at Panera Bread.

Restaurant Secrets Every Home Cook Should Know While this recipe ranks among the best dishes you can make out of cans, the secret ingredient in this soup is just a dash of cumin. Typically used in Indian and Mexican food, this spice adds a little earthiness to the dish that makes it totally irresistible. For the most authentic cafe experience, bake some homemade bread to go along with this recipe. Creamy Tortellini Soup with Sausage and Spinach Recipe. Boy, oh boy, do I love tortellini. Little pasta dumplings filled with cheese? Our Top Quick and Easy Noodle Soups. We’re back with more pantry recipe ideas to spice up life while we all stay at home. Best Soup Recipes Recipe. Carne guisada, Tex-Mex stew. I receive many emails from y’all, asking when I’ll be writing about a certain favorite Texan food.

I’ve had requests for everything from deep-fried pickles to peanut-butter pie. Homestyle Chicken Noodle Soup. Classic chicken noodle soup that will leave you feeling so good, so warm, so cozy. Perfect for sick days and cold nights!!! Save It’s the dead of winter. 33 degrees F all week. Snow and ice piles everywhere. Literally the BEST Chicken Noodle Soup. Mushroom Bourguignon Recipe. Woodgal, Tasting helps, but in general "dry" red wines are those that are not considered fruity. In an article about using wine for cooking, Bon Apetit lists several dry wines. The maxim that "If I wouldn't drink it, then I wouldn't cook with it" always holds true. My penchant is to use an inexpensive table wine, like Rene Junot, or an inexpensive Southern Rhone. Basque Garlic Soup Recipe - Marti Buckley. Easy Potato Soup with Bacon Recipe. Thai Coconut Curry Soup. Instant Pot Cuban Black Bean Soup – A Cozy Kitchen. Cuban black beans might be my favorite food to get in all of Florida.