The BEST Potato Soup! This post may contain affiliate links. 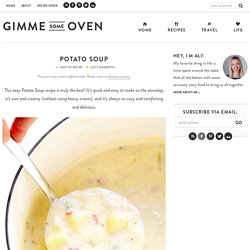 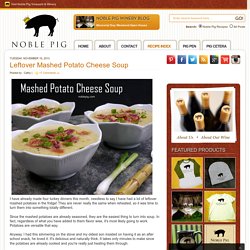 They are never really the same when reheated, so it was time to turn them into something totally different. Since the mashed potatoes are already seasoned, they are the easiest thing to turn into soup. In fact, regardless of what you have added to them flavor wise, it's most likely going to work. Potatoes are versatile that way. Anyway, I had this simmering on the stove and my oldest son insisted on having it as an after school snack, he loved it. This will be a great way to use up holiday leftover mashed potatoes or you just might find yourself making extras just so you have leftovers. Print Recipe Ingredients Directions In a large, heavy pot, melt butter over low heat.

The bacon and green onion are optional but why wouldn't you? 17 Top-Rated Soups You Can Make In Less Than An Hour - Allrecipes Dish. Warm up to the world’s best soups. 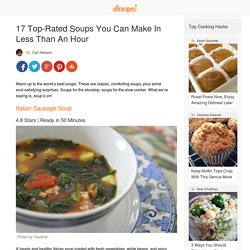 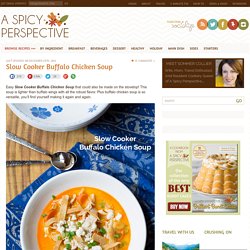 This soup is lighter than buffalo wings with all the robust flavor. Plus buffalo chicken soup is so versatile, you’ll find yourself making it again and again. Funny story. Lt. We were vegans for a month once, but have also been gluten free, paleo, slow carbers, south beach dieters, and pretty much any other diet you can think of. Why? I guess we like to take our health into our own hands, using our bodies as personal science labs, so to speak. Nowadays we eat all things in moderation, keeping our focus on unprocessed foods most of the time.

So back to the story… A few years ago when we were trying a Slow Carb Diet (Lean protein, veggies, and legumes. Every time we went out to eat, Dan would order a huge platter of greasy buffalo chicken wings. After weeks of this, I couldn’t take it anymore. Define healthy, please. He has not ordered buffalo wings for health purposes since. Print. Potato Cheese Soup Recipe. Creamy Potato Soup loaded with chunky potatoes, bacon, corn and two kinds of cheese. 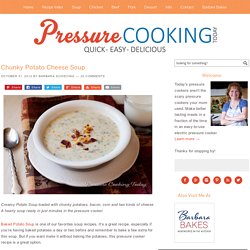 A hearty soup ready in just minutes in the pressure cooker. Baked Potato Soup is one of our favorites soup recipes. It’s a great recipe, especially if you’re having baked potatoes a day or two before and remember to bake a few extra for this soup. Zuppa Toscana. 7-Can Taco Soup. While 7-Can Taco Soup may not be a classic southern recipe, it is certainly a very popular recipe in the south, no doubt because it feeds a crowd, is a party favorite, and is simply delicious. 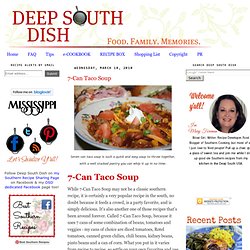 It's also another one of those recipes that's been around forever. Called 7-Can Taco Soup, because it uses 7 cans of some combination of beans, tomatoes and veggies - my cans of choice are diced tomatoes, Rotel tomatoes, canned green chilies, chili beans, kidney beans, pinto beans and a can of corn. What you put in it varies from recipe to recipe, so settle on your own favorites and use whatever number of cans you like. This version just happens to be the way I like mine. Here's how to make it. Vary the beans - some people use black beans or northern beans, or several cans of kidney beans. With the exception of the chili beans - because they are packed in a chili sauce - I drain and rinse the beans I use.

Don't forget to recycle those cans! ☛ Are you on Facebook? Check These Recipes Out Too! Soups. Soup. Aunt Bee's Recipes: Smoked Sausage & {Beer Cheese} Potato Soup. This soup only has a small amount of beer in it, but it makes such a difference in the depth of flavor that I had to put beer in the name. 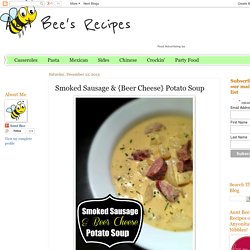 The best thing about this soup other than the taste, is that it's made in around 30 minutes. This is the perfect winter time, weeknight meal! Smoked Sausage and Cheesy Potato SoupIngredients1 lb Smoked Sausage2 tbsp unsalted butter1 onion, chopped2 Celery Stalks, Chopped3 cups Chicken Broth6 russet potatoes, peeled and cut in 1” cubes (about 5 cups)1½ lbs Velveeta, cut into ½” cubes1 cup Whole Milk1 Cup Heavy Cream½ cup Beer1/4 tsp Black PepperParsley for GarnishDirectionsDice sausage, onions and celery. Melt butter in a large Pot (I use my dutch oven) and saute onions, celery and sausage for 5 minutes over medium high heat. Add Chicken Broth and Potatoes.