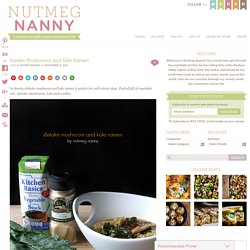 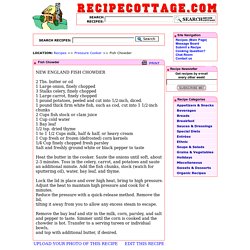 Saute the onions until soft, about2-3 minutes. Turkey Pho Recipe on Food52. Cooking is more fun with friends. 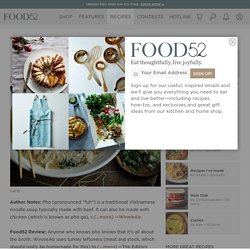 Find your friends who are already on Food52, and invite others who aren't to join. Let's GoLearn more Join Our Community Follow amazing home cooks. Collect recipes and articles. Sign Up ♦ 2,320  Save ▴ If you like it, save it! Save and organize all of the stuff you love in one place. Got it! If you like something… Click the heart, it's called favoriting. Author Notes: Pho (pronounced “fuh”) is a traditional Vietnamese noodle soup typically made with beef. Food52 Review: Anyone who knows pho knows that it's all about the broth. Makes 2 big bowls of soup Toast the spices 2 tablespoons coriander seeds 4 whole cloves 4 whole star anise 1 cinnamon stick Heat a cast-iron skillet or frying pan over medium heat. Make the turkey pho Your Best Recipe for Turkey Leftovers Contest Winner!

Classic Maritime Seafood Chowder recipe. Michael Smith's Favourite Maritime Seafood Chowder. Creamy-Yet-Light Fish Chowder — Recipes From The Kitchn. Cooking for my family during a holiday visit to Seattle, I came up with this chowder as a light yet comforting weeknight dinner to give us a break from the rich holiday meals we had been eating. 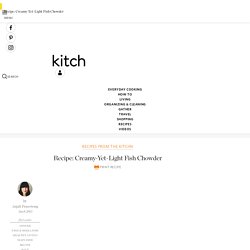 The broth skips the usual milk or cream and is instead thickened by pureeing cooked potatoes and aromatics into a creamy, flavorful base studded with chunks of mild white fish and soft vegetables. Warm, satisfying and not too heavy, this dairy-free soup is the perfect meal for a chilly January evening. Clam Chowder Lightened Up. Thick and creamy clam chowder, without all the added fat that it usually is prepared with. 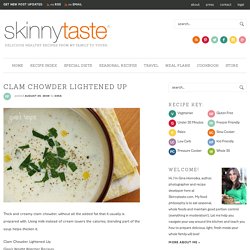 Baked Potato Soup. This slimmed down version of a loaded baked potato soup has everything you love about a baked potato – sour cream, cheddar, bacon and chives, at a fraction of the calories! 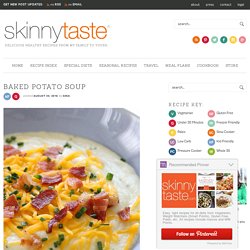 This has been one of my most popular soup recipes since I first shared in 2011. I had gotten a request to make over traditional baked potato soup (You really like to challenge me, don’t you!) And was a little stumped on how I was going to take something as carb-rich as potatoes, with added fat like sour cream, cheese and bacon, light! I knew I had to hide a vegetable in this soup to bulk it up without added calories. 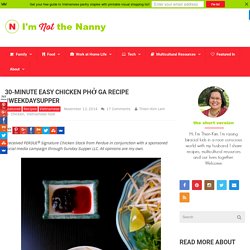 All opinions are my own. A big bowl of pho is the ultimate comfort food for me. Many of you have asked me to share my pho recipe, but I’ve hesitated. Not because I don’t want to share, but because it’s time consuming. As a busy mother, quick and easy recipes are the bulk of my cooking arsenal. Today, I’m excited to share my super easy chicken phở (or phở ga) recipe that can be made in around 30 minutes. I grew up eating countless bowls filled with chewy rice noodles, piled with various meats and herbs and topped off with steaming, flavorful broth.

The key to any good bowl of chicken pho is the broth. The second thing that makes a pho broth good is its aromatics. TIP: Look for budget friendly spices at your international specialty grocery stores or the Mexican/Hispanic aisles of your regular grocery story. Wash one stalk of scallions (green onions). Garlic and Ginger Infused Chicken Broth. Everyone has their own cold remedy. 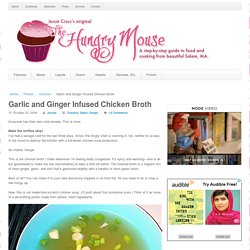 This is mine. Make the sniffles stop! I’ve had a savage cold for the last three days. Since The Angry Chef is catching it, too, neither of us was in the mood to destroy the kitchen with a full-blown chicken soup production. Asian-Style Ginger Chicken Soup. Peel the ginger and slice it into four 1/4-inch coins. 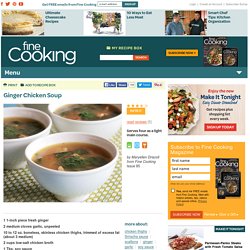 Using the flat side of a chef’s knife or a meat pounder, smash the coins. Smash the garlic and remove the skin. In a medium saucepan, com­bine the ginger, garlic, chicken, broth, soy sauce, lemon juice, chile paste, and 1 cup water. Bring to a boil over medium-high heat. Reduce the heat to low and gently simmer until the chicken is cooked through, about 10 minutes. Jamie's Asian Chicken Noodle Broth Recipe.