Vegan Stock Powder. I’m not the type of girl that has enough freezer space (or the inclination) to store all my vegetable odds and ends and then remembers to boil them down into a broth and then re-store that broth in the freezer. 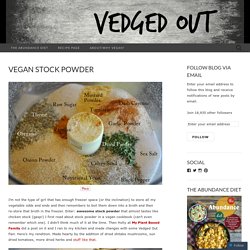 Enter: awesome stock powder that almost tastes like chicken stock (gasp!) I first read about stock powder in a vegan cookbook (can’t even remember which one). I didn’t think much of it at the time. Then Holly at My Plant Based Family did a post on it and I ran to my kitchen and made changes with some Vedged Out flair. Here’s my rendition. 1 ounce dried shitake mushrooms10 sun dried tomato halves (not the kind packed in oil) snipped into quarters3 T. onion powder1 T. garlic powder2 T. sea salt1 T. raw sugar1/2 t. ground black pepperdash cayenne1 t. dried thyme1 t. dried oregano1 t. paprika1/2 t. turmeric1 T. dried parsley1 t. mustard powder1/2 t. celery seeds1 C. nutritional yeast This stock powder stores perfectly in a pint jar in the pantry. Like this: Like Loading... Hearty Vegan Mushroom Soup. My friend, Emma, has been nagging …. reminding me that I haven’t yet given her the recipe for my hearty vegan mushroom soup, and quite rightly so, for this is far too good to keep to myself. 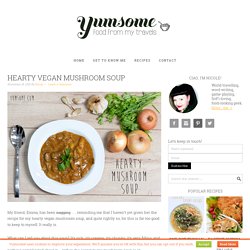 It really is. What can I tell you about this soup? It’s rich, it’s creamy, it’s chunky, it’s very filling, and it’s deeply satisfying. In fact, its depth of flavour belies its simplicity. There’s absolutely nothing complicated about it – rather, the secret to my mushroom soup is in caramelising the onions, roasting the garlic, and then letting the whole lot reduce down to intensify the flavours as it thickens. Now that autumn has finally arrived here in Rijeka, and the nights are chilly and drawing in, my hearty – dare I say, meaty – soup is more welcome than ever.

Out for an evening stroll through the forest on Sunday evening… Roast Garlic Instead of just roasting enough garlic for this recipe, why not roast several bulbs at the same time? Slow Cooker Indian Potato Kale Soup {Vegan} - VeggieConverter. Dutch Food: Split Pea Soup (Erwtensoep, Snert) In my quest to discover the joys of Dutch cuisine since moving to the Netherlands 4 months ago, I've attempted to "veganize" several traditional Dutch soups (for example, see my previous post about bruine bonensoep). 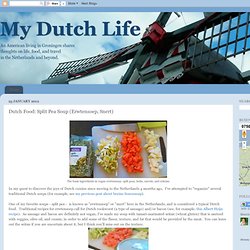 One of my favorite soups - split pea - is known as "erwtensoep" or "snert" here in the Netherlands, and is considered a typical Dutch food. Traditional recipes for erwtensoep call for Dutch rookworst (a type of sausage) and/or bacon (see, for example, this Albert Heijn recipe). As sausage and bacon are definitely not vegan, I've made my soup with tamari-marinated seitan (wheat gluten) that is sauteed with veggies, olive oil, and cumin, in order to add some of the flavor, texture, and fat that would be provided by the meat. You can leave out the seitan if you are uncertain about it, but I think you'll miss out on the texture. 25 Vegan Soups So Unbelievably Creamy, You'll Never Know They're Dairy-Free. No dairy? 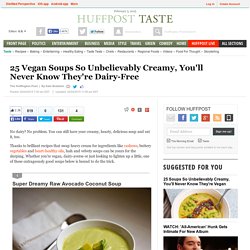 No problem. You can still have your creamy, hearty, delicious soup and eat it, too. Thanks to brilliant recipes that swap heavy cream for ingredients like cashews, buttery vegetables and heart-healthy oils, lush and velvety soups can be yours for the slurping. Whether you're vegan, dairy-averse or just looking to lighten up a little, one of these outrageously good soups below is bound to do the trick.

Healthy Happy Life. Hearty Lentil Soup with Tomatoes: Vegan recipe. Homemade Vegan Tomato Soup. I always make sure to have plenty of canned crushed tomatoes in my pantry, just in case I want a dinner that is not only incredibly quick to make but also packed with antioxidants, fiber and other nutrients. Tomatoes are actually one of the rare vegetables (ok, technically it’s a fruit) that actually benefits from cooking. Lycopene, the pigment that is responsible for the tomatoes’ red colour, is one of several carotenoids (a group of antioxidants) that may help to decrease the risk of heart disease and certain cancers.

The processing method used in canning tomatoes causes the release of a greater amount of lycopene than what is usually found in raw tomatoes. Though I usually make tomato soup from canned tomatoes, I will definitely have to do a recipe using fresh ones as well. Both are very convenient and not time-consuming. Raw Vegan Cream of Broccoli - Sunwarrior News. Raw Vegan Cream of Broccoli 4.11/5 (82.11%) 19 votes It is possible to get a creamy broccoli soup without cream or cheese. 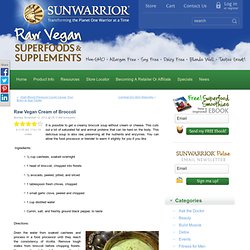 This cuts out a lot of saturated fat and animal proteins that can be hard on the body. This delicious soup is also raw, preserving all the nutrients and enzymes. You can allow the food processor or blender to warm it slightly for you if you like. Ingredients: Vegan Red Lentil Soup. Loaded Veggie Nacho Soup! GF + VEG.