Electronic Nose Analyses Breath to Diagnose Disease. In Brief Researchers are building an electronic nose that can accurately detect and distinguish chemicals in your breath, which could lead to earlier diagnosis of diseases and eventually replace blood tests. 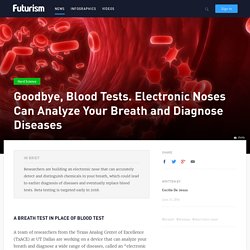 Beta testing is targeted early in 2018. A Breath Test In Place of Blood Test. Human CRISPR Trials Begin. Sometime this year, people in the US and Europe will start getting treated for diseases using the gene-editing tool CRISPR, but a big question remains—will it actually work? 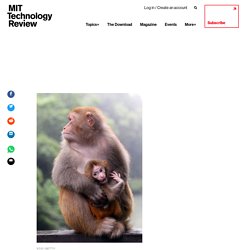 Our primate cousins may hold the answer. The first use of CRISPR to edit human cells in a dish was reported in 2013. It’s since been touted as an easy way to alter people’s DNA, promising to banish what are currently lethal or lifelong maladies with a single treatment that fixes them at the genetic root. Digital Contact Lenses Transform Diabetes Care. Google submitted a patent to the US Patent & Trademark Office in 2014 that described a digital, multi-sensor contact lens that can also detect blinking, with benefits like turning the page of an e-book with a “blink of an eye”.

In this interview, Michael Friedin - the Chief Strategy Officer of Hot Paper Lantern discusses the challenge of establishing a digital footprint and and how microservices and digital enablement are the future. – thedigitalenterprise

Later, more details about the idea emerged, revealing a much more transformative use for the contact lens – measuring blood glucose from tears. 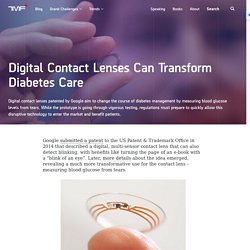 Sensors are embedded between two soft layers of lens material and a pinhole in the lens allows tear fluid to seep into the sensor and be used to measure blood sugar levels. A wireless antenna, thinner than a human hair, will act as a controller to communicate information to the wireless device. Data will then be sent to an external device. Robots Perform a Third of U.S. Surgeries. In Brief Robots are most commonly used in hospitals for aiding surgeons in performing operating room tasks. 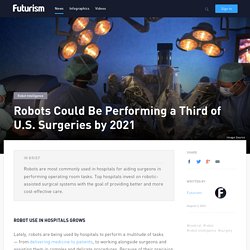 Top hospitals invest on robotic-assisted surgical systems with the goal of providing better and more cost-effective care. Robot Use in Hospitals Grows Lately, robots are being used by hospitals to perform a multitude of tasks — from delivering medicine to patients, to working alongside surgeons and assisting them in complex and delicate procedures.

Because of their precision and inability to feel weariness that may cause muscle tremors, robots are perfect assistants to surgeons in carrying out such meticulous jobs in the operating room. As robotic surgery continues to grow, experts predict that, within the period of five years, robots will dominate the operating rooms in the United States. Paying the Price. Alzheimer Vaccine Introduced. Alzheimer’s disease is a devastating, incurable illness affecting an estimated 5.4 million American adults. 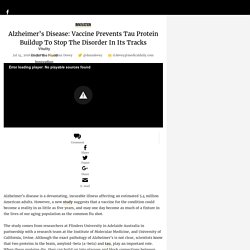 However, a new study suggests that a vaccine for the condition could become a reality in as little as five years, and may one day become as much of a fixture in the lives of our aging population as the common flu shot. The study comes from researchers at Flinders University in Adelaide Australia in partnership with a ­research team at the Institute of Molecular Medicine, and University of California, Irvine. Although the exact pathology of Alzheimer’s is not clear, scientists know that two proteins in the brain, amyloid-beta (a-beta) and tau, play an important role. When these proteins die, they can build up into plaques and block connections between brain nerve cells. Aging changes our bodies and brains. In animal studies, the antibodies work best to block a-beta before the subjects have developed the disease. Source: Davtyan H, Zagorski K, Rajapaksha H, et al. AI Diagnosis Trusted More Than Doctors. It probably goes without saying, but medicine has improved a lot in modern times. 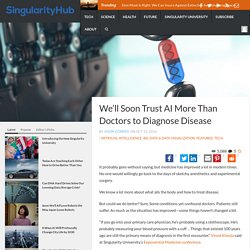 No one would willingly go back to the days of sketchy anesthetics and experimental surgery. We know a lot more about what ails the body and how to treat disease. But could we do better? Sure. Some conditions yet confound doctors. Goodbye Hospital, Hello Home-Spital. Nearly 20 years ago, when I graduated from medical school, the world of healthcare was dominated by breakthroughs in the field of biology. 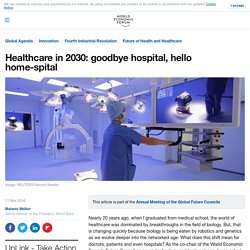 But, that is changing quickly because biology is being eaten by robotics and genetics as we evolve deeper into the networked age. What does this shift mean for doctors, patients and even hospitals? As the co-chair of the World Economic Forum’s Future Council on neuro-technology and brain science, I was asked to reflect on my experience in this domain. By the way, you know you are getting old(er) when you are asked to reflect. Back when I started out in the 1990s, the discovery of protease inhibitors - a class of antiviral drugs - helped change the clinical course for HIV positive patients, while vaccines for conditions like hepatitis C and Lyme disease saved a generation from unnecessary suffering. Cancer Fully Treatable via Gene Editing & Liquid Biopsy. In Brief British doctors have successfully demonstrated the potential of a new method of cancer treatment that combines a cell therapy called CAR T with gene-editing. 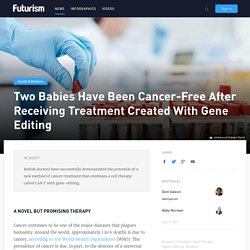 A Novel But Promising Therapy Cancer continues to be one of the major diseases that plagues humanity.