How To Recycle HDPE Plastic (High Density Polyethylene) - a simple method. Bodycard 0236. A Neuroscientist's Radical Theory of How Networks Become Conscious - Wired Science. It’s a question that’s perplexed philosophers for centuries and scientists for decades: Where does consciousness come from? 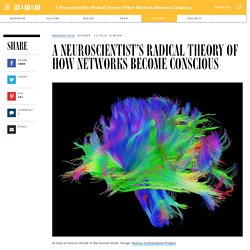 We know it exists, at least in ourselves. But how it arises from chemistry and electricity in our brains is an unsolved mystery. Neuroscientist Christof Koch, chief scientific officer at the Allen Institute for Brain Science, thinks he might know the answer. According to Koch, consciousness arises within any sufficiently complex, information-processing system. Internet bonding - Uplink Bonding. Acceleration - The optional Internet bonding service (Broadband Bonding Service) enables uplink bonding, therefore with BBS all traffic is aggregated for faster transfer via the Broadband Bonding(TM) technology. 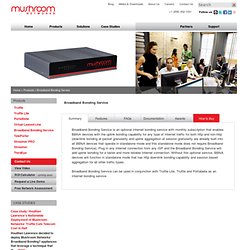 Even in cases of single session, all Internet access lines are simultaneously combined together to provide a faster data transfer. Pictured below is a Truffle device bonding 6 Internet access modems. Improved network reliability - With the Internet bonding service, automatic failover is provided for all types of traffic, so that failure of one or more access lines will not cause failure of the aggregated access line, as long as at least one access line is still active.

Additionally, Automated Domain Name Service (ADNS) optimization is used to maximize the utility of all active access lines. This translates to both better performance and less downtime for your local network. Please see the features of Truffle Lite, Truffle or Portabella for additional features. Minds. ERO - Concrete Recycling Robot by Omer Haciomeroglu. This robot sucks! 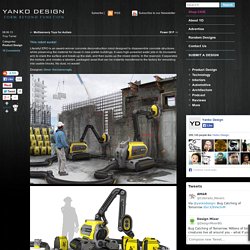 Literally! ERO is an award-winner concrete deconstruction robot designed to disassemble concrete structures while preserving the material for reuse in new prefab buildings. NASA Brings WiFi To Space. Robotics. HUANG YI & KUKA - A DUET OF HUMAN AND ROBOT. Physicists To Test If Universe Is A Computer Simulation. Physicists have devised a new experiment to test if the universe is a computer. 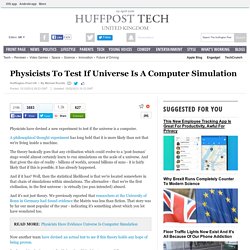 A philosophical thought experiment has long held that it is more likely than not that we're living inside a machine. The theory basically goes that any civilisation which could evolve to a 'post-human' stage would almost certainly learn to run simulations on the scale of a universe. And that given the size of reality - billions of worlds, around billions of suns - it is fairly likely that if this is possible, it has already happened.

Digital Natives - Matthew Plummer-Fernandez. Digital Natives 2012 z-corp powder composite and z-corp tinted binder Everyday items such as toys and a watering can are 3D scanned using a digital camera and subjected to algorithms that distort, abstract and taint them into new primordial vessel forms. 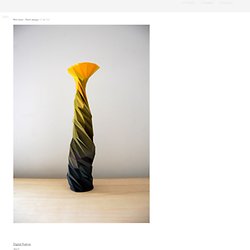 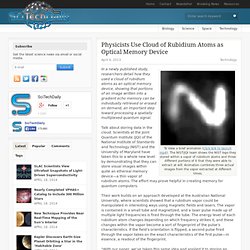 The NIST/JQI team shows the NIST logo they stored within a vapor of rubidium atoms and three different portions of it that they were able to extract at will. Animation combines three actual images from the vapor extracted at different times. In a newly published study, researchers detail how they used a cloud of rubidium atoms as an optical memory device, showing that portions of an image written into a gradient echo memory can be individually retrieved or erased on demand, an important step toward processing a spatially multiplexed quantum signal. Talk about storing data in the cloud.

Scientists at the Joint Quantum Institute (JQI) of the National Institute of Standards and Technology (NIST) and the University of Maryland have taken this to a whole new level by demonstrating that they can store visual images within quite an ethereal memory device—a thin vapor of rubidium atoms. Publication: J.B. Lego Antikythera Mechanism. Controlling the Spin Polarization of Electrons in Three Dimensions. The interior bulk of a topological insulator is indeed an insulator, but electrons (spheres) move swiftly on the surface as if through a metal. 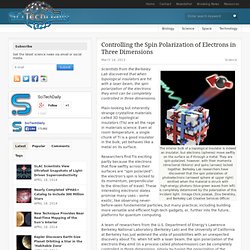 They are spin-polarized, however, with their momenta (directional ribbons) and spins (arrows) locked together. Berkeley Lab researchers have discovered that the spin polarization of photoelectrons (arrowed sphere at upper right) emitted when the material is struck with high-energy photons (blue-green waves from left) is completely determined by the polarization of this incident light. (Image Chris Jozwiak, Zina Deretsky, and Berkeley Lab Creative Services Office) Scientists from the Berkeley Lab discovered that when topological insulators are hit with a laser beam, the spin polarization of the electrons they emit can be completely controlled in three dimensions.

Observing Atomic Collapse Resonances in Artificial Nuclei on Graphene. Relativistic quantum mechanics predicts that when the charge of a superheavy atomic nucleus surpasses a certain threshold, the resulting strong Coulomb field causes an unusual atomic collapse state; this state exhibits an electron wave function component that falls toward the nucleus, as well as a positron component that escapes to infinity. 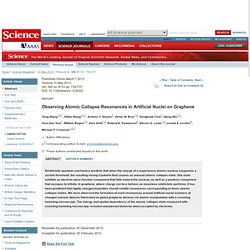 In graphene, where charge carriers behave as massless relativistic particles, it has been predicted that highly charged impurities should exhibit resonances corresponding to these atomic collapse states. We have observed the formation of such resonances around artificial nuclei (clusters of charged calcium dimers) fabricated on gated graphene devices via atomic manipulation with a scanning tunneling microscope. Getters, Setters, and Constructors - IS2216 - JAVA WIKI. Private Attributes In the last example we created a student class which had attributes studentNumber, studentFirstName, and studentLastName. 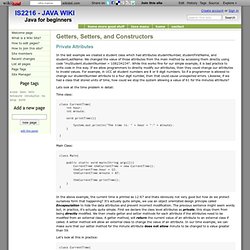 Wiki: Tutorial Directory. You can find more about this page in LuaTutorial. 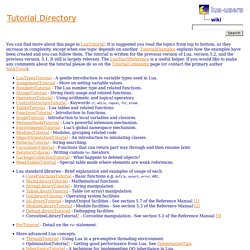 It is suggested you read the topics from top to bottom, as they increase in complexity, except when one topic depends on another. TutorialExamples explains how the examples have been created and you can follow them. The tutorial is written for the previous version of Lua, version 5.2, and the previous version, 5.1. It still is largely relevant. The Pirates Who Print Shoes - Modern Nerd. Care to download and print your next pair of shoes? Without even paying for them? The Pirate Bay invite you to share their vision: a world in which footwear is stolen and printable.

They’ve announced a new category called “physibles” — files describing physical objects that can be made with a 3D printer. In their imagined future you do not buy the objects you desire. You download the files and print them. Cory Doctorow’s craphound.com » Novels. Homeland A few years later, California's economy collapses, but Marcus’s hacktivist past lands him a job as webmaster for a crusading politician who promises reform.

Soon his former nemesis Masha emerges from the political underground to gift him with a thumbdrive containing a Wikileaks-style cable-dump of hard evidence of corporate and governmental perfidy. Thunderbolt Labs: Machine Learning on the Cheap and Easy. For those not in the know, Weka is the excellent data-mining toolkit made available by the nice folks at the University of Waikato. Weka provides a few features that are worth evaluating for your next datamining/machine learning project: Datamining workbench with strong visualization tools and data manipulation.Machine learning experiment environment – a great way to compare different ML algorithms for performance.Knowledge Flow Environment - datamining workflow engine.

I haven’t played with this yet, but the documentation implies that you have a simple “ETL” system that can help you create scripts to automate your file processing and learning tasks.GPL codebase – so use it where you want to how you need to. Free Software Creator Speaks Out Against SOPA 1/2. Kepler: Overview. Quad Copter Demonstration - Tokyo Hackerspace. Why computers have two zeros: +0 and -0. Here’s a strange detail of floating point arithmetic: computers have two versions of 0: positive zero and negative zero. Setting an Application's Entry Point (The Java™ Tutorials > Deployment > Packaging Programs in JAR Files) If you have an application bundled in a JAR file, you need some way to indicate which class within the JAR file is your application's entry point. You provide this information with the Main-Class header in the manifest, which has the general form: The value classname is the name of the class that is your application's entry point.

Recall that the entry point is a class having a method with signature public static void main(String[] args). After you have set the Main-Class header in the manifest, you then run the JAR file using the following form of the java command: The main method of the class specified in the Main-Class header is executed. An Example We want to execute the main method in the class MyClass in the package MyPackage when we run the JAR file. Learn You a Haskell for Great Good! - Chapters.

Security. Electronics. Robots to take care of prisons in South Korea. It looks like South Korea is really keen on replacing the country’s workers with robotic counterparts. Bullet Physics. Best Lifehacks for Designers, Developers & Photographers. Neo4j: NOSQL For the Enterprise. Need a graph database like Twitter is built on? @neo4j delivers, @emileifrem tells why. Epic Mode // Think Like (a) Git. This site is organized in a fairly linear fashion, with two variants. In AD/HD mode, each section will have links at the bottom to the previous and next section, so you can read through the site from beginning to end.

10 code snippets to interact with Twitter. 1 – Autofollow script (PHP) This code allow you to automatically follow user who have tweeted about a specific term.

It studies the structure, algorithms, behaviour, and interactions of natural and artificial systems which store, process, access, and communicate information. The field considers the interaction between humans and information systems alongside the construction of computer interfaces. Currying. Lambda calculus. The lowercase lambda, the 11th letter of the Greek alphabet, is used to symbolize the lambda calculus. Ergodic theory. Signs that you're a bad programmer - Software Engineering Tips. You're a Bad Programmer. Embrace It. Padovan sequence. Bezier curves - a primer.