Chapters - Learn You a Haskell for Great Good! 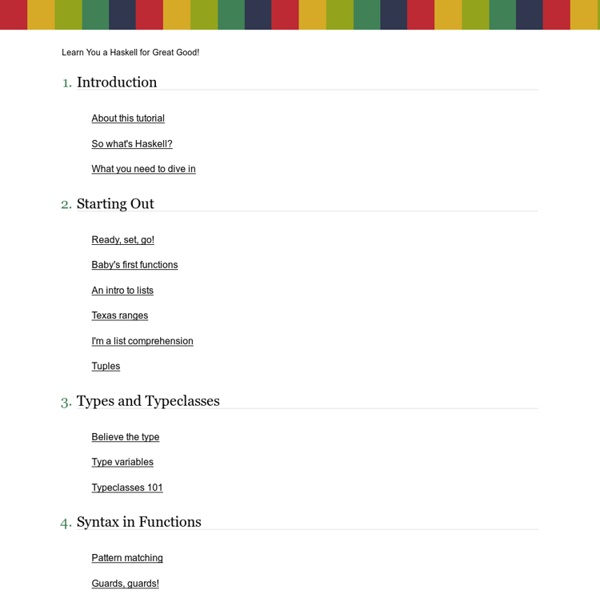 dev.stephendiehl.com/hask/#(1) Stephen Diehl (@smdiehl ) Since I wrote these slides for a little user group talk I gave two years ago they have become a surprisingly popular reference. I decided to actually turn them into a proper skimmable reference for intermediate level Haskell topics that don't necessarily have great coverage or that tend be somewhat opaque as to where to get going, and then aggregate a bunch of the best external resources for diving into those subjects with more depth.

Higher-Order Perl by Mark Jason Dominus Order Higher-Order Perl online from Powell's Books Download full text here There are three versions available. You have your choice of structure or presentation, but not both. Making A Website With Haskell - adit.io This is a guide to building and deploying a simple website using Haskell. We will use: Scotty for the backend Blaze-html for templating and Persistent for the ORM. Scotty is Haskell’s version of Sinatra. It also uses the same web server as Yesod (Warp) so it’s quite fast. Programming in Lua : contents This book is a detailed and authoritative introduction to all aspects of Lua programming written by Lua's chief architect. Programming in Lua provides a solid base to any programmer who wants to use Lua. It covers all aspects of Lua—from the basics to its API with C. The book is the main source of programming patterns for Lua, with numerous code examples that help the reader to make the most of Lua's flexibility and powerful mechanisms. The book is targeted at people with some programming background, but it does not assume any prior knowledge about Lua or other scripting languages. When you buy a copy of this book, you help to support the Lua project.

Learn Haskell Fast and Hard I really believe all developers should learn Haskell. I don’t think everyone needs to be super Haskell ninjas, but they should at least discover what Haskell has to offer. Learning Haskell opens your mind. Mainstream languages share the same foundations: variablesloopspointersdata structures, objects and classes (for most) Haskell is very different. Programming Pearls by Jon Bentley. Addison-Wesley, Inc., 2000. ISBN 0-201-65788-0. 239 + xi pp. $24.95 This book is a collection of essays about a glamorous aspect of software: programming pearls whose origins lie beyond solid engineering, in the realm of insight and creativity. This book provides a guide for both students and experienced programmers about how to design and create programs, and how to think about programming.

Beginning Haskell Before you start About this tutorial This tutorial targets programmers of imperative languages wanting to learn about functional programming in the language Haskell. In an introductory tutorial, many of Haskell's most powerful and complex features cannot be covered. In particular, the whole area of type classes and algebraic types (including abstract data types) is a bit much for a first introduction. For readers whose interest is piqued, I will mention that Haskell allows you to create your own data types, and to inherit properties of those data types in type instances.

Haskell: The Confusing Parts If you’re used to the C family of languages, or the closely related family of “scripting languages,” Haskell’s syntax (mainly) is a bit baffling at first. For some people, it can even seem like it’s sneaking out from under you every time you think you understand it. This is sort of a FAQ for people who are new to Haskell, or scared away by its syntax. Use this as a cheat sheet, not a textbook. Misc.