Facebook Fueled Anti-Refugee Attacks in Germany, New Research Suggests. ALTENA, Germany — When you ask locals why Dirk Denkhaus, a young firefighter trainee who had been considered neither dangerous nor political, broke into the attic of a refugee group house and tried to set it on fire, they will list the familiar issues. 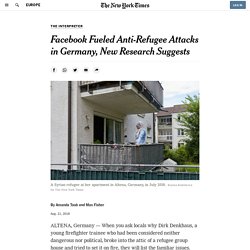 This small riverside town is shrinking and its economy declining, they say, leaving young people bored and disillusioned. Though most here supported the mayor’s decision to accept an extra allotment of refugees, some found the influx disorienting. Don’t blame bots, fake news is spread by humans. Rabbit Hole: ‘Where We Go One’ - How social media has fueled conspiracy theories like QAnon. Andy mills Kevin? 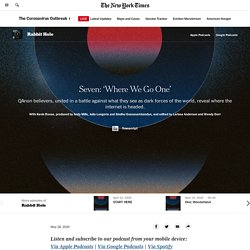 Kevin roose Yes. Rabbit Hole: The Accidental Emperor - How did a youtube video game streamer become one of the online world's most influential star. [music] archived recording As we approach the 21st century, a new means of communication is emerging. 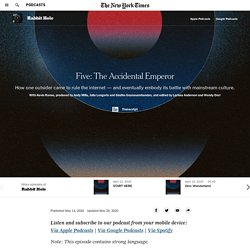 This technology uses computer networks to link people on every continent. If we are destined to live in a global village, one day we will all be connected to the internet. youtube video 1 Somebody bit me. Rabbit Hole: Wonderland - The story of a young man radicalized by Youtube (Three Part Series) Archived recording 1 Take the spin, now you’re in with the techno set. 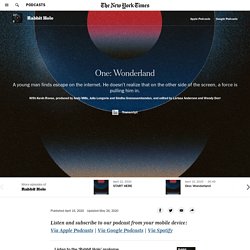 You’re going surfing on the internet. Radiolab:The Trust Engineers A look at facebook of researchers who are tweaking our online experience to try to make the world a better place. Is this possible, or even a good idea? Short Wave: The Squishy, Slimey Science Of ASMR - Researchers try to understand ASMR — a feeling triggered in the brains of some people by whispering, soft tapping, and delicate gestures. Without Fail: How Megan Phelps-Roper Left the Westboro Baptist Church - How joining twitter led one Westboro baptist family member to completely changer her life.

Ted Radio Hour: IRL online- Speakers explore rules to navigate our online lives. Death, Sex & Money: Finding Love, And A Kidney, On Tinder. Lori Interlicchio: I mean it definitely was there, that like, this is obviously gonna affect our relationship romantically. 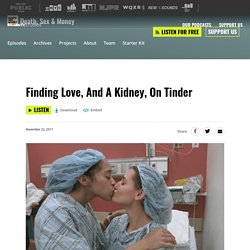 But, I also remember like, "If this entire relationship goes to crap because of this then like, whatever. A person has a kidney! " This is Death, Sex & Money. The show from WNYC about the things we think about a lot… …and need to talk about more. I’m Anna Sale. Lori Interlicchio had just finished college and moved home when she tried Tinder for the first time. LI: I mainly just wanted to find some more queer women friends on Long Island. The Daily: Jack Dorsey on Twitter's Mistakes - Founder and CEO of twitter discusses the platform's history and influence. 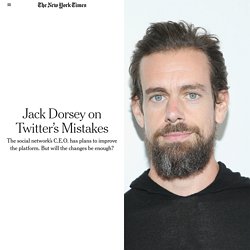 This is “The Daily.” It’s been four years since the 2016 election demonstrated the powerful role that social media companies have come to play in shaping political discourse and beliefs in America. All of It: TikTok Music - How TikTok is shaping the music industry. #96 The Secret Life of Alex Goldman. Reply All: The Snapchat Thief - How hackers make money by stealing sought after Snapchat user names. Reply All: The World's Most Expensive Free Watch - How do companies that advertise free products on social media make money? 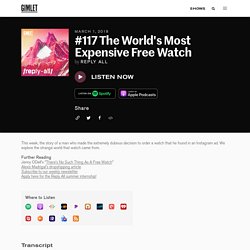 Reply All: Is Facebook Spying on You? - An investigation of the popular conspiracy theory that Facebook is listening in our conversations. [theme music] 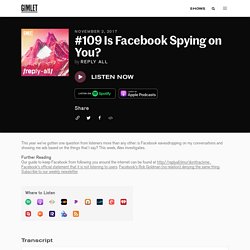 Reply All - On the Inside - The story of a convicted felon with a life sentence who has become a prolific blogger despite never being on the internet. Reply All: The Secret Life of Alex Goldman - What can hackers find out about someones life after taking over their phone. Radiolab: Post No Evil Redux - A look at Facebook's rulebook and the impact it has on the billions of facebook users. JAD ABUMRAD: Okay, so in the layer cake of mayhem that we find ourselves in -- that metaphor makes no sense -- I want to update a story that we played a few years ago that is fascinating, but definitely shifting and changing as we speak. 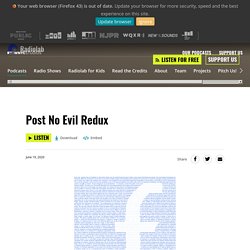 And worth tracking, and yet hard to track with all the things that are happening right now. This is a story that aired I believe two years ago, but still very timely. As you'll hear a bit later in the episode, we'll come back around and update it, bring it up to the present. The Reveal podcast : Harpooned by Facebook - A look at how Facebook collects user data and uses it to make billions. The Daily: How Facebook Is Undermining ‘Black Lives Matter’ - An overview of the controversies surrounding facebook's attempts at content moderation. Kevin roose In the summer of 2014, Michael Brown, an unarmed black teenager, was shot and killed by Darren Wilson, a white police officer in Ferguson, Missouri. 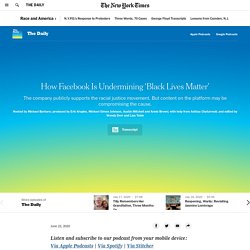 And for weeks — archived recording I said indict, convict! Send that killer cop to jail! — there were protests in Ferguson and across the country. Hands up! And back in 2014, if you remember, like, you would go on Twitter or Facebook and almost every post in your feed, or most of the posts in your feed, would be some sort of call to action. Black Lives Matter. People posting the Black Lives Matter hashtag, people organizing support and supplies and financial donations for this emerging civil rights movement.