The Cosmological Argument: The First Cause or Prime Mover. Incorporating Aristotle's notion of a "prime mover" into Summa Theologica and elsewhere, Thomas Aquinas famously formulated his version of the cosmological or "first cause" argument. 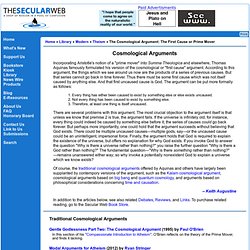 According to this argument, the things which we see around us now are the products of a series of previous causes. But that series cannot go back in time forever. Thus there must be some first cause which was not itself caused by anything else. And that first uncaused cause is God. The argument can be put more formally as follows: 1. There are several problems with this argument. Of course, the traditional cosmological arguments offered by Aquinas and others have largely been supplanted by contempory versions of the argument, such as the Kalam cosmological argument, cosmological arguments based on big bang and quantum cosmology, and arguments based on philosophical considerations concerning time and causation. -- Keith Augustine In addition to the articles below, see also related Debates, Reviews, and Links. 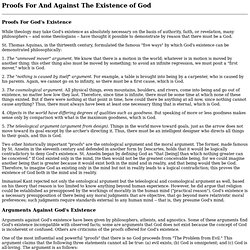 Reasonable Faith: q_and_a_What do you think of Richard Dawkins argument for atheism in The God Delusion. On pages 157-8 of his book, Dawkins summarizes what he calls "the central argument of my book. 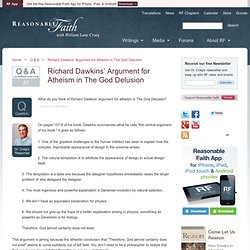 " It goes as follows: 1. One of the greatest challenges to the human intellect has been to explain how the complex, improbable appearance of design in the universe arises. 2. The natural temptation is to attribute the appearance of design to actual design itself. Arguments for God's Existence. Arguments for the existence of God come in many different forms; some draw on history, some on science, some on personal experience, and some on philosophy. 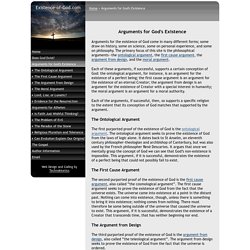 God Exists. Is it possible for a finite mind to know if God exists? 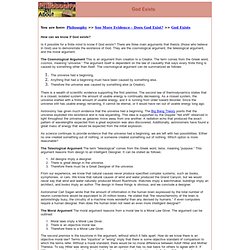 There are three main arguments that theists (those who believe in God) use to demonstrate the existence of God. They are the cosmological argument, the teleological argument, and the moral argument. The Cosmological Argument This is an argument from creation to a Creator. The term comes from the Greek word, cosmos, meaning “universe.” The argument itself is dependent on the law of causality that says every finite thing is caused by something other than itself. There is a wealth of scientific evidence supporting the first premise. Astronomy has given much evidence that the universe had a beginning. As science continues to provide evidence that the universe had a beginning, we are left with two possibilities.

The Teleological Argument The term “teleological” comes from the Greek word, telos, meaning “purpose.” All designs imply a designer. The Moral Argument The moral argument reasons from a moral law to a Moral Law Giver. ShareThis. God, Arguments for the Existence of. From New World Encyclopedia Arguments or proofs for the Existence of God have been proposed by philosophers, theologians, and other thinkers. 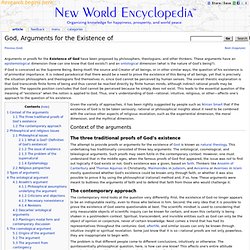 These arguments have an epistemological dimension (how can one know that God exists?) And an ontological dimension (what is the nature of God’s being?). If God is conceived as the Supreme Being, Being-itself, the source and Creator of all beings, or in other similar ways, the question of his existence is of primordial importance. It is indeed paradoxical that there would be a need to prove the existence of this Being of all beings, yet that is precisely the situation philosophers and theologians find themselves in, since God cannot be perceived by human senses.

Ebon Musings: Unmoved Mover. FreethoughtPedia.com. From FreeThoughtPedia Do you believe in God? 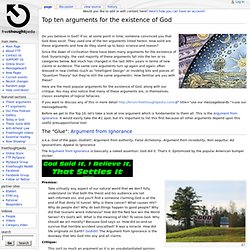 If so, at some point in time, someone convinced you that God does exist. They used one of the ten arguments listed herein. How solid are these arguments and how do they stand up to basic science and reason? Arguments for the existence of God. Multimedia. 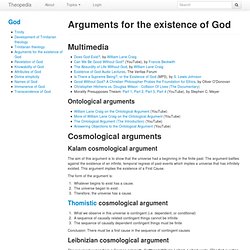