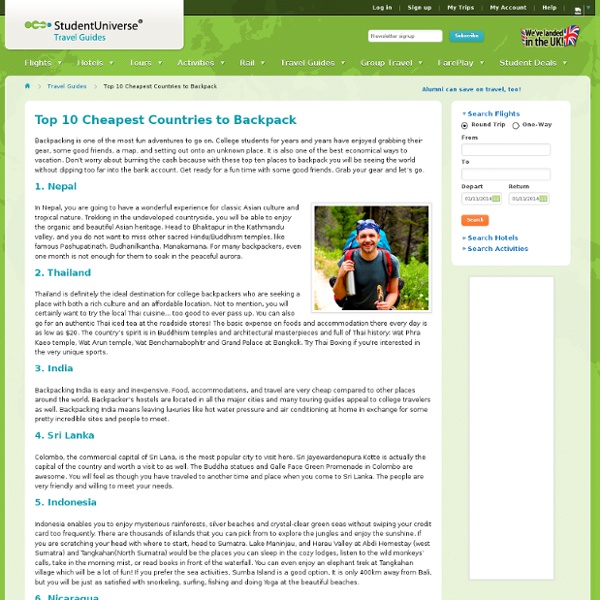 Almost Untouched Nature - Waterfall Restaurant, Philippines Image credit Visiting this interesting Waterfall Restaurant located in San Pablo City, Philippines at the Villa Escudero Plantations and Resort can be a truly unique and memorable experience. Visitors can enjoy in lunch served on bamboo dining tables while the crystalline running water flows under their feet. Best Movies (of All-Time) The best movies evoke tears, laughter, terror, reminiscence, and/or mystery in a truly personal way. Anything less (AKA, around 98% of all movies) serves no purpose other than to shove mindless, forgettable fodder in our face and line Hollywood’s pockets (Be afraid Michael Bay, be VERY afraid). This is that other, sacred 2%—the Holy Grail of cinema. Note: “Memorable Moments” may contain spoilers.

Amazing Places To Experience Around the Globe (Part 5) The Sphinx, Giza, Egypt Fjadrargljufur, Iceland Folegandros, Greece. 9 of the Coolest Secret Subway Stations in the World If you’re anything like us, you’re fascinated by the secret worlds of underground transportation. What goes on in abandoned subway stations? Do mole people exist? Have we been approaching Platform 9¾ at the wrong angle? UCB Parents Jokes &Quotes: Kids talk Science - StumbleUpon This page is brought to you by UC Berkeley Parents Network Back to the Jokes & Quotes Collection THE FOLLOWING ARE ALL QUOTES FROM 11 YEAR OLDS' SCIENCE EXAMS: * "Water is composed of two gins, Oxygin and Hydrogin. Oxygin is pure gin. 10 Must-See Destinations for Backpackers in Southeast Asia Halong Bay (photo: Herr-Bert) This is a guest post by Will Peach. Southeast Asia casts an allure like no other. From pristine beaches to bustling cities and everything in between, this magical part of the world is hugely popular with backpackers the world over.

Cheap Places To Stay For Awhile Around The World The problem with cheap places is that it’s all relative to the lifestyle someone chooses. While I do list Xi’an, China as being inexpensive, it’s also quite easy to spend as much as you would in Tokyo, Japan. It also depends on what you’re into.