Why Intelligent People Use More Drugs 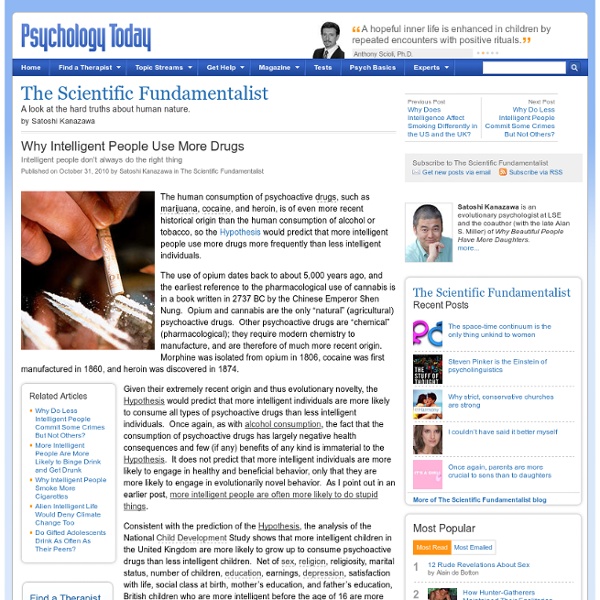 An Interview with Douglas R. Hofstadter, following ''I am a Strange Loop'' Douglas R. Hofstadter is best-known for his book Gödel, Escher, Bach (GEB for short). In his latest book, I am a Strange Loop, he visits once again many of the themes originally presented in that book. The interview below was conducted in September 2007 and was originally published, in Hebrew, in the online culture magazine Haayal Hakore. The interview was conducted by Tal Cohen and Yarden Nir-Buchbinder. The first part of I am a Strange Loop reads like a condensed version of GEB, by explaining the idea of consciousness as a strange loop. I certainly did not believe intelligent machines were just around the corner when I wrote GEB. Am I disappointed by the amount of progress in cognitive science and AI in the past 30 years or so? I am a deep admirer of humanity at its finest and deepest and most powerful — of great people such as Helen Keller, Albert Einstein, Ella Fitzgerald, Albert Schweitzer, Frederic Chopin, Raoul Wallenberg, Fats Waller, and on and on. We'll return to Kurzweil soon.

Hunter S. Thompson Motivational Posters While drafting the recent guide outlining the real dangers associated with combining different types of alcohol , I got to thinking about one of the most prominent and outspoken substance-mixers of our time, the late Hunter S. Thompson. A man who graciously documented the uncharted depths of the binge unlike any other in history, HST provided us with nuggets of wisdom and encouragement all along the way. Tetris effect Screenshot of a tetromino game. People who play video puzzle games like this for a long time may see moving images like this at the edges of their visual fields, when they close their eyes, or when they are drifting off to sleep. The Tetris effect (also known as Tetris Syndrome) occurs when people devote so much time and attention to an activity that it begins to pattern their thoughts, mental images, and dreams. Other examples[edit] The Tetris effect can occur with other video games.[2] It has also been known to occur with non-video games, such as the illusion of curved lines after doing a jigsaw puzzle, or the involuntary mental visualisation of Rubik's Cube algorithms common amongst speedcubers. On a perceptual level, sea legs are a kind of Tetris effect. ’Tain’t—so—bad—by—day because o’ company,But—night—brings—long—strings—o’ forty thousand million Boots—boots—boots—boots—movin’ up an’ down again. Place in cognition[edit] History of the term[edit] L'effet Tetris[edit] See also[edit]

11 ways the world could end: Road to destruction Interested in uplifting stories on the natural world, sustainable communities, simple food, and new thinking on how to live well? Please enter a valid email address and try again! No thanks untitled Introduction Robert Monroe developed and patented a binaural-beat technology called the Hemi-Sync auditory-guidance system. The Monroe Institute, a 501c(3) nonprofit research and educational organization, uses this Hemi-Sync system within an educational process. During this process individuals listen to a combination of multiplexed audio binaural beats that are mixed with music, pink sound, and/or the natural sound of surf. Binaural-beat stimulation, coupled with the effects of the other components within the Hemi-Sync process, encourages access to focused, meditative, and alert states of consciousness. Ancient cultures used the natural power of sound and music to safely influence states of consciousness in religious ceremonies and to promote psychological and physical health. Binaural Beats and The Physiology of the Brain Binaural beats were discovered in 1839 by a German experimenter, H. We are in the midst of a revolution focusing on the study of consciousness (Owens 1995). Summary

Alternate Sleep Cycles Most people only think that there is one way to sleep: Go to sleep at night for 6-8 hours, wake up in the morning, stay awake for 16-18 hours and then repeat. Actually, that is called a monophasic sleep cycle, which is only 1 of 5 major sleep cycles that have been used successfully throughout history. The other 4 are considered polyphasic sleep cycles due to the multiple number of naps they require each day. How is this possible? How is this healthy? Well the most important of every sleep cycle is the Stage 4 REM (Rapid Eye Movement) sleep, which has been shown to provide the benefits of sleep to the brain above all other stages of sleep. This way, you still get the benefits of 8 hours of sleep without wasting all of the time it takes to get to REM cycles, resulting in a much more efficient sleep cycle. Uberman Cycle: 20 to 30 minute naps every 4 hours, resulting in 6 naps each day. Everyman Cycle: One longer “core” nap that is supplemented with several 20-30 minute naps. Dymaxion Cycle:

Pleasure & Intelligence Drugs Adopted By Society By Roger Highfield - Science Editor, The Telegraph - UK 7-15-5 Mind-altering drugs could be as common as coffee within a couple of decades to boost performance at school and at work, to "unlearn" addiction and to erase memories of distressing events such as a terrorist attack, according to a government think-tank. Society may end up realising Aldous Huxley's vision of a Brave New World in which people take a supposedly perfect pleasure-drug, Soma - though the report shies away from discussing whether future governments will be tempted to encourage the use of "happy pills" for social control. The Foresight think-tank points out that psychoactive substances have been part of society for thousands of years. "We have not reached a ceiling for recreational drug use," it said. One of the team that produced the report, Drugs Futures 2025? Other possibilities would be drug testing of children before they took exams to ensure that some did not cheat with cognitive enhancers, or "cogs".

Rosenhan experiment Rosenhan's study was done in two parts. The first part involved the use of healthy associates or "pseudopatients" (three women and five men, including Rosenhan himself) who briefly feigned auditory hallucinations in an attempt to gain admission to 12 different psychiatric hospitals in five different states in various locations in the United States. All were admitted and diagnosed with psychiatric disorders. After admission, the pseudopatients acted normally and told staff that they felt fine and had no longer experienced any additional hallucinations. All were forced to admit to having a mental illness and agree to take antipsychotic drugs as a condition of their release. The average time that the patients spent in the hospital was 19 days. The second part of his study involved an offended hospital administration challenging Rosenhan to send pseudopatients to its facility, whom its staff would then detect. The pseudopatient experiment[edit] The non-existent impostor experiment[edit]

50 Life Secrets and Tips Memorize something everyday.Not only will this leave your brain sharp and your memory functioning, you will also have a huge library of quotes to bust out at any moment. Poetry, sayings and philosophies are your best options.Constantly try to reduce your attachment to possessions.Those who are heavy-set with material desires will have a lot of trouble when their things are taken away from them or lost. Possessions do end up owning you, not the other way around. Become a person of minimal needs and you will be much more content.Develop an endless curiosity about this world.Become an explorer and view the world as your jungle. Stop and observe all of the little things as completely unique events. Read “Zen and the Art of Happiness” by Chris Prentiss.This book will give you the knowledge and instruction to be happy at all times regardless of the circumstances.