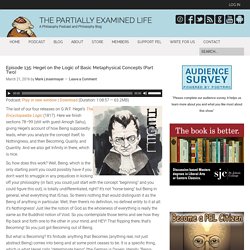 Hegel's The Encyclopaedia Logic (1817). Here we finish sections 78–99 (still with guest Amogh Sahu), giving Hegel's account of how Being supposedly leads, when you analyze the concept itself, to Nothingness, and then Becoming, Quality, and Quantity. The Closing of the Scientific Mind. Floyd Abrams Free expression threatened? 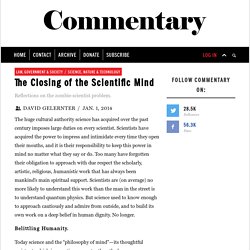 By Donald Trump? I guess you could say so. When a president engages in daily denigration of the press, when he characterizes it as the enemy of the people, when he repeatedly says that the libel laws should be “loosened” so he can personally commence more litigation, when he says that journalists shouldn’t be allowed to use confidential sources, it is difficult even to suggest that he has not threatened free speech. And when he says to the head of the FBI (as former FBI director James Comey has said that he did) that Comey should consider “putting reporters in jail for publishing classified information,” it is difficult not to take those threats seriously.

The Closing of the Scientific Mind. About - Purpose of God Evidence. Flipping through the TV channels one lazy evening, I overheard a news commentator mentioning ”the long standing conflict between science and religion” in a matter-of-fact tone of voice. 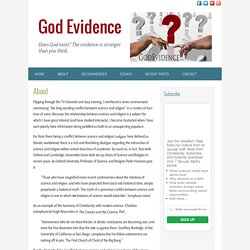 Because the relationship between science and religion is a subject for which I have great interest (and have studied intensely), I become frustrated when I hear such plainly false information being peddled as truth to an unsuspecting populace. Far from there being a conflict between science and religion (religion here defined as theistic worldviews) there is a rich and flourishing dialogue regarding the interaction of science and religion within certain branches of academia. So much so, in fact, that both Oxford and Cambridge Universities have both set up chairs of Science and Religion in recent years. The Cosmological Argument. The cosmological argument is the argument that the existence of the world or universe is strong evidence for the existence of a God who created it. 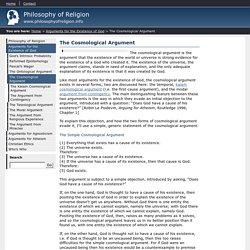 The existence of the universe, the argument claims, stands in need of explanation, and the only adequate explanation of its existence is that it was created by God. Like most arguments for the existence of God, the cosmological argument exists in several forms; two are discussed here: the temporal, kalam cosmological argument (i.e. the first cause argument), and the modal argument from contingency. The main distinguishing feature between these two arguments is the way in which they evade an initial objection to the argument, introduced with a question: “Does God have a cause of his existence?” [Robin Le Poidevin, Arguing for Atheism, Routledge 1996, Chapter 1] 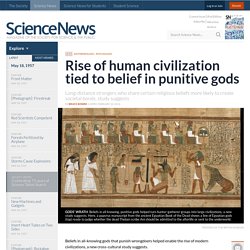 Cooperation among throngs of strangers in expanding societies required a common faith in moralistic gods, say sociocultural anthropologist Benjamin Purzycki of the University of British Columbia in Vancouver and his colleagues. To believers, these gods were concerned about good and bad behavior, knew what everyone thought and did, and punished selfish transgressors in a big way. Shared beliefs in punitive gods paved the way for vast trade networks, market economies and institutions of social control, including governments and courts, the scientists propose online February 10 in Nature. 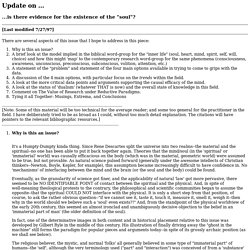 [Note: Some of this material will be too technical for the average reader; and some too general for the practitioner in the field. I have deliberately tried to be as broad as I could, without too much detail explanation. Are Top Scientists Really So Atheistic? Look at the Data - The Intersection : The Intersection. Elaine Howard Ecklund is a sociologist at Rice University; we cited her work on the topic of science and religion in Unscientific America. 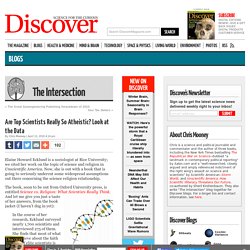 Now, she is out with a book that is going to seriously undercut some widespread assumptions out there concerning the science religion relationship. The book, soon to be out from Oxford University press, is entitled Science vs. Religion: What Scientists R eally Think. What is a Worldview? Ken Funk 21 March 2001 The meaning of the term worldview (also world-view, world view, and German Weltanschauung) seems self-evident: an intellectual perspective on the world or universe. 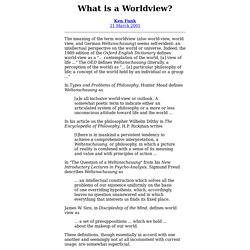 Atheism as a Positive Worldview. Thank you for your interest in Patheos newsletters! 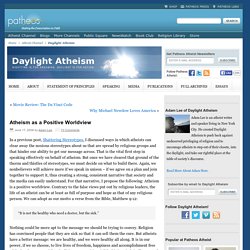 Please enter your email address below and click the "Subscribe" button. Thank you for your subscription. You can visit your Preference Center to complete your profile and see what else we have to offer. We apologize, we were unable to complete your subscription at this time, please try again later. If this error persists please contact us at communications@patheos.com. What is philosophy of science (and should scientists care)? Just about 20 years ago, I abandoned a career as a physical chemist to become a philosopher of science. 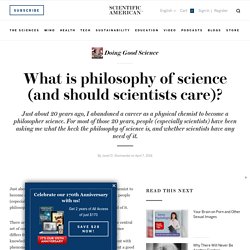 For most of those 20 years, people (especially scientists) have been asking me what the heck the philosophy of science is, and whether scientists have any need of it. There are lots of things philosophers of science study, but one central set of concerns is what is distinctive about science -- how science differs from other human activities, what grounds its body of knowledge, what features are essential to scientific engagement with phenomena, etc. What in the World is a Worldview? Everybody has one. A person may be educated or uneducated, liberal or conservative, rich or poor, nonbelieving or God-fearing, but all people act and live in certain ways because they are guided by particular worldviews. Given its importance, just what exactly is a worldview? In the simplest terms, a worldview may be defined as how one sees life and the world at large. In this manner it can be compared to a pair of glasses.1 How a person makes sense of the world depends upon that person's "vision," so to speak.

Problem 3: Step-by-Step Random Mutations Cannot Generate the Genetic Information Needed for Irreducible Complexity. Editor's note: This is Part 3 of a 10-part series based upon Casey Luskin's chapter, "The Top Ten Scientific Problems with Biological and Chemical Evolution," in the volume More than Myth, edited by Paul Brown and Robert Stackpole (Chartwell Press, 2014). The full chapter can be found online here.

Other individual installments can be found here: Problem 1, Problem 2, Problem 4, Problem 5, Problem 6, Problem 7, Problem 8, Problem 9, Problem 10. Cretinism or Evilution?: Darwin Quotations on Design. Cretinism or Evilution? No. 3E.T. Babinski Darwin Quotations on Design Further Quotations from Darwin "on Design" How Information Theory Unifies Quantum Mechanics. Briefly: Wave-particle duality refers to the requirement that particles act like points, discrete packages located in one place at one time, and waves simultaneously. Simple dots vs. periodic blurs. A wave isn’t a point, it’s a space. Uncertainty says, meanwhile, that we can’t know both the position and velocity of a given particle at the same time.

There is a fundamental limit to this knowledge. Propaganda and Debating Techniques. As you read the following pages, you will be exposed to quite a variety of deceptive propaganda techniques, logical fallacies, and lies (hopefully, none of them mine). You might as well learn a little about how the art and science of propaganda works, so that you can recognize the techniques as people try to fool your mind with them. You probably already know a lot about this, whether you realize it or not, because politicians pull many of these standard stunts on you every election year, and you have grown immune to some of them. Two of the most convincing arguments for Intelligent design. Why Atheists Change Their Mind: 8 Common Factors. Conversions from atheism are often gradual and complex, no doubt. Peter Lombard and The Existence of God. Fitch's Paradox of Knowability. aRemonstrant'sRamblings. A few people who read Linda Zagzebski’s argument in my previous post were most indignant that a philosopher would assume moral realism without making a case for it specifically.

I think the most obvious reason for that, which they largely appear unaware of, is that the majority of professional philosophers do not need convincing that realism is correct since most of them think so. Having said that I think it is fair to answer those who doubt moral realism to be true or that there are no good reasons for thinking it to be true. Some of them appear to think there are no such reasons or that the moral realist is reduced to mere intuitionism at this point. Refuting Unfalsifiable Claims with Superior, Incompatible Explanations. George Wald: The Origin of Death. Is a Proof Bad If It Fails to Convince Everyone? Information-theoretical foundations of quantum mechanics - Quantum foundations and quantum information theory. The Analysis of Knowledge. The Analysis of Knowledge. AModalEpistemicArgumentForTheExistenceOfGod 3 ERutten. Atheism and the curious case of the universal acid. - God Evidence.

The Finest Argument Against Atheism. Lawrence Krauss debates “A Universe From Nothing” with an astrophysicist. C.S. Lewis and the Argument from Reason. Arguments from Reason. Craig’s Argument from Intentionality. It’s okay to marry a Republican or Democrat, just not an atheist. Theistic Apologetics. Excerpt 9780801016462. Atheism Analyzed: Principles of Evidence. Paul Davies on the Big Bang, time, cosmology, God, and theology.