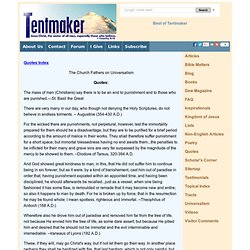 —St. Basil the Great There are very many in our day, who though not denying the Holy Scriptures, do not believe in endless torments. -- Augustine (354-430 A.D.) For the wicked there are punishments, not perpetural, however, lest the immortality prepared for them should be a disadvantage, but they are to be purified for a brief period according to the amount of malice in their works. And God showed great kindness to man, in this, that He did not suffer him to continue being in sin forever; but as it were, by a kind of banishement, cast him out of paradise in order that, having punishment expiated within an appointed time, and having been disciplined, he should afterwards be recalled...just as a vessel, when one being fashioned it has some flaw, is remoulded or remade that it may become new and entire; so also it happens to man by death. George de Benneville. George de Benneville (London, 1703 - Pennsylvania, 1793) was a Universalist cleric. 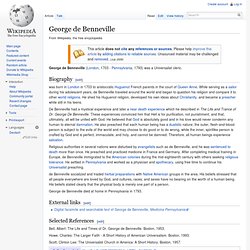 Biography[edit] was born in London in 1703 to aristocratic Huguenot French parents in the court of Queen Anne. While serving as a sailor during his adolescent years, de Benneville traveled around the world and began to question his religion and compare it to other world religions. He shed his Huguenot religion, developed his own ideas about Christianity, and became a preacher while still in his teens. John Murray (minister) John Murray John Murray (1741–1815) is the founder of the Universalist denomination in the United States, a pioneer minister and an inspirational figure. 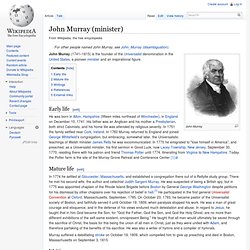 In 1774 he settled at Gloucester, Massachusetts, and established a congregation there out of a Rellyite study group. There he met his second wife, the author and catechist Judith Sargent Murray. Adolph Ernst Knoch. Adolph Ernst Knoch (December 19, 1874 – March 28, 1965) was the author of numerous theological writings and a Bible publisher. 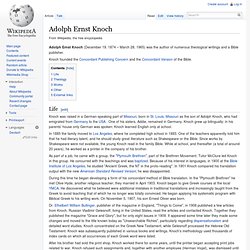 Knoch founded the Concordant Publishing Concern and the Concordant Version of the Bible. Life[edit] Knoch was raised in a German-speaking part of Missouri, born in St. Louis, Missouri as the son of Adolph Knoch, who had emigrated from Germany to the USA . One of his sisters, Addie, remained in Germany. In 1885 the family moved to Los Angeles, where he completed high school in 1893. The Christian Universalist Association > History of Universalism. THE DOCTRINE OF EVERLASTING PUNISHMENT IS A MISTAKE AND TURNS GOD FROM A TRUE FATHER INTO A TYRANT - AIONIOS IS NEVER "EVERLASTING WITHOUT END" BUT "AGE-LASTING"

The "Doctrine Of Everlasting Punishment" Is Manmade. 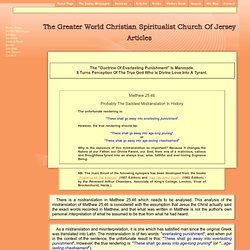 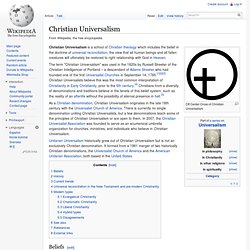 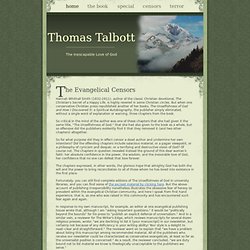 But when one conservative Christian press republished another of her books, The Unselfishness of God and How I Discovered It: a Spiritual Autobiography, the publisher simply eliminated, without a single word of explanation or warning, three chapters from the book. So critical in the mind of the author was one of these chapters that she had given it the same title, "The Unselfishness of God," that she had also given to the book as a whole, but so offensive did the publishers evidently find it that they removed it (and two other chapters) altogether. So for what purpose did they in effect censor a dead author and undermine her own intentions? The Unselfishness of God and How I Discovered It (the missing chapters) Three chapters of: (My Spiritual Auto-Biography) By Hannah Whitall Smith Reprinted without editing by Tentmaker Ministries and Publications, Inc. 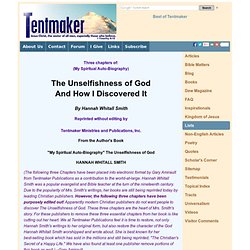 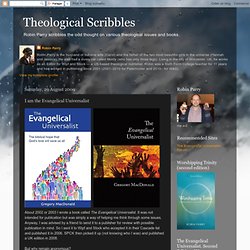 It was not intended for publication but was simply a way of helping me think through some issues. Anyway, I was advised by a friend to send it to a publisher for review with possible publication in mind. So I sent it to Wipf and Stock who accepted it in their Cascade list and published it in 2006. SPCK then picked it up (not knowing who I was) and published a UK edition in 2008.

But why remain anonymous? I kept my identity secret in the first instance to protect my employer. So to avoid unnecessary difficulties for my employer I kept my real name out of it until enough people had read the book to say, 'Well, he may not be correct but his view is not unChristian.' (As an aside, it has always been my policy not to use Paternoster as a vehicle for the promotion of my own ideas. So why confess my identity now? The Logic of Hell. Adam Hamilton When I’ve suggested in the past that there might be Hindus in heaven, some of my conservative friends have found the idea unsettling. 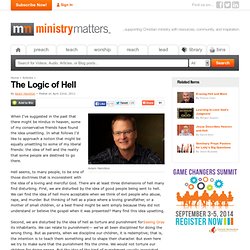 In what follows I’d like to approach a notion that might be equally unsettling to some of my liberal friends: the idea of hell and the reality that some people are destined to go there. Sbjt_1998summer2. A God of Many Understandings?: The Gospel and Theology of Religions - Todd Miles. "Universalism: a historical survey" by Richard Bauckham. [p.47] Richard Bauckham is Professor of New Testament Studies at the University of St. Andrews. Orthodoxy and Gregory of Nyssa's Universalism.

Could Hell be Redemptive and not merely Retributive? I AM A CONVINCED UNIVERSALIST, by William Barclay. By William Barclay. Universal Salvation: BIBLE PROOFS. By J. W. HANSON, D.D. Christian Universalism: Universalist Thought Through Church History. In the same way, universalist thought also runs like a stream throughout church history; sometimes flowing strong and clear, other times running mostly underground. The wellspring of this doctrine flows from the apostolic church of the New Testament, and is clearly expressed in Paul's writings.

Starting in the first century of Christianity, the doctrine was developed most acutely amongst the native Greek speakers--those who were closest to the heart and times in which the New Testament was written. These early leaders cast a long shadow of influence upon the church, as others carried their torch—but perhaps their greatest influence has been reserved for our day and age. Just as our forefathers suffered and died martyr's deaths for truths that we take for granted today and that are universally accepted across Christendom, so today cries of heresy continue to arise against truths that we believe future generations of the church will hold to be evident. Honest Questions and Answers about Hell. By Mercy Aiken and Gary Amirault. Expositions (html format) 100 Scriptural Proofs That Jesus Christ Will Save All Mankind. By Thomas Whittemore. The Early Christian View of the Savior. By Gary Amirault Research Obstacles 'Few Christians study the early Christian writings.

Those who do usually go no further than reading some early church history books, most of which are doctrinally slanted. Believers and Supporters of Christian Universalism. Christian Universalism: The belief that everything in heaven and on earth will ulitmately be reconciled back to the Creator through the work of Jesus Christ, his Son. In plain language, no one is going to be endlessly tortured or annihilated as has been commonly taught. Universalism, the Prevailing Doctrine of the Christian Church During its First Five Hundred Years. Asw.pdf (application/pdf Object) HopeBeyondHell.net — The Righteous Purpose of God's Judgment. Richard Wayne Garganta, The Truth About Tithing, Universal Salvation University.